The event is taking place on July 1, which would have been her 60th birthday.

“Prince William and Prince Harry will attend a small event to mark the unveiling of a statue they commissioned of their mother, Diana, Princess of Wales, in the Sunken Garden at Kensington Pace on Thursday 1st July,” a palace statement read, which was tweeted by royal author Omid Scobie on Friday.

“In addition to close family of Diana, Princess of Wales, members of the statue committee, the sculptor Ian Rank-Broadley, and garden designer, Pop Morrison, will also attend,” the statement continued.

“Further details about the statue and garden will be provided on the 1st July,” the palace concluded.

On Friday, Harry returned to England from his California home to participate in the unveiling. His wife Meghan Markle stayed in California with their children Archie Harrison, 2, and Lilibet Diana, who was born on June 4.

Harry, 36, previously returned to his home country in April for the funeral of his grandfather, Prince Philip.

Plans for the statue were first announced in February 2017. According to a statement released by the palace last year, the statue was commissioned by Diana’s sons to “recognize her positive impact in the U.K. and around the world.”

Princess Diana passed away in 1997 at age 36 from injuries she sustained in a Paris car crash.
( AP Photo/Jim Bourdier)

Due to COVID-19 restrictions, the number of people attending has been scaled down, People magazine reported.

According to the outlet, the brothers formed a committee made up of Diana’s sisters, some close friends, experts and charity contacts to help create a tribute for her. They commissioned Rank-Broadley, the sculptor behind the image of the queen that has been used to decorate all British coins since 1998, to create the sculpture.

Diana passed away in 1997 from injuries she sustained in a Paris car crash. She was 36.

Harry and Markle’s departures from royal duties began in 2020 over what they described as the British media’s intrusions and racist attitudes towards the duchess, 39. The family now resides in the coastal city of Montecito, Calif. 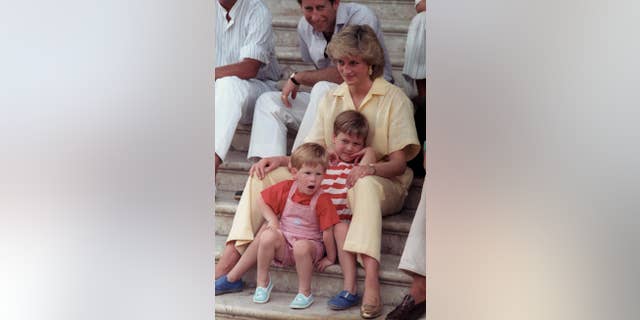 Princess Diana of Wales smiles as she sits with her sons, Princes Harry, front, and William, on the steps of the Royal Palace on the island of Majorca, Spain.
(Reuters)

On June 4, the Duke and Duchess of Sussex welcomed their second child, a daughter named Lilibet “Lili” Diana Mountbatten-Windsor. The child is eighth in line to the British throne.

The name pays tribute to both Harry’s grandmother, Queen Elizabeth II, whose family nickname is Lilibet, and his late mother Diana.