After throwing on a skimpy swimsuit, Priyanka Chopra put the ‘sun’ in Sunday – and her hubby, Nick Jonas, thought she looked like the perfect late-summer ‘snack.’

Priyanka Chopra wasn’t feeling the Sunday Scaries, judging by the pair of photos the Citadel star posted to her Instagram on Aug. 29. Tagging her location as “Home : ),” Priyanka, 39, laid sprawled out on an outdoor couch while wearing a mismatched bikini – red bottoms with a black top – and a pair of fashionable white sunglasses. However, Priyanka wasn’t the only one making sure to get a healthy dose of Vitamin D. Nick Jonas joined his wife for this late August sunbathing session. The 28-year-old “Spaceman” singer appeared in one of Priyanka’s posts, a fork in one hand and a knife in the other. As Nick pretended that his wife’s posterior was a meal from a three-star restaurant, Priyanka took a picture and captioned it, “snack.”

“Fav pic ever,” commented celebrity chef Sami Udell, who also added three “crying until tears come out my eyes” emojis. “Looks likes nick is surviving on snacks only,” said another commentator. Others wrote how funny it was, while others said it was a “cute,” playful, and “fire” picture. “Winner, winner, chicken dinner.”

This bit of summertime love comes roughly two weeks after the couple was spotted PDA-ing it up during a lunch date in London. While Nick and Priyanka ate at the Beach Blanket Babylon restaurant on Aug. 12, the Quantico star leaned in to kiss Nick on the cheek. If that wasn’t indication enough that they were enjoying their time together, Nick and Priyanka were also spotted laughing during their meal – and they held hands while walking outside of the restaurant. Priyanka and Nick actually started the month off with some PDA. The couple reunited in London after recently celebrating the third anniversary of Nick’s proposal. The couple was spotted leaving the  Crown London Aspinalls Casino around 4 am on Aug. 5, walking hand in hand as they made their exit. 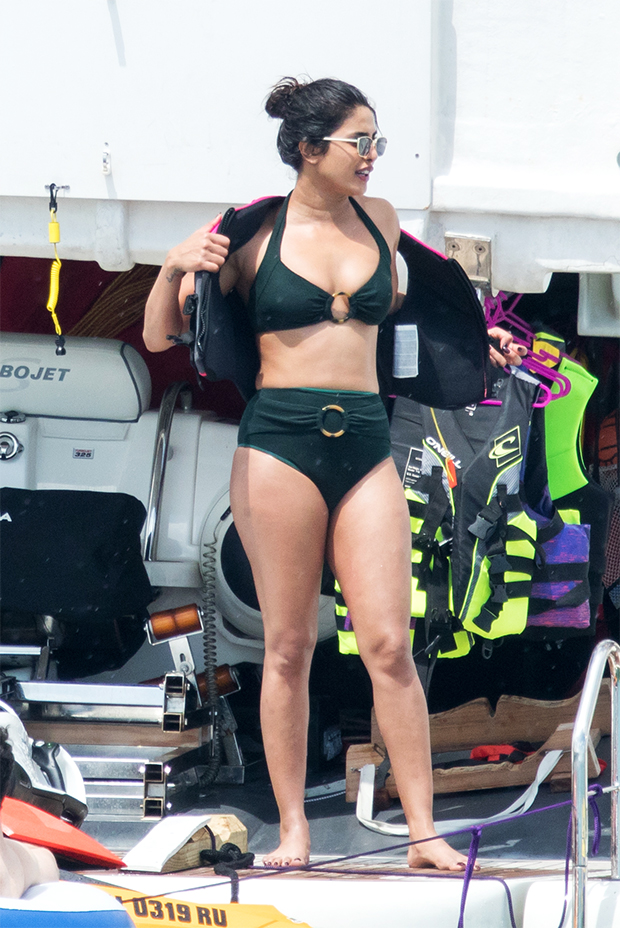 Two weeks before this happy reunion in England, Priyanka took in the sights – and sun – of London while celebrating her birthday. The actress celebrated her 39th year by lounging in a sexy black V-neck one-piece swimsuit featuring cutouts on the straps (while also showing off her subtle tattoo on her arm.) Priyanka also showed off her sense of humor. “Expectation vs. reality,” she captioned the IG gallery. In the first photo, she looked like a pinup goddess – and in the second, she giggled up a storm while a dog photobombed her.