R. Kelly Drops Album, 'I Admit It' While Locked Up for Federal Sex Crimes

R. Kelly just dropped the biggest surprise album of 2022 … a project called “I Admit It” with lyrics that address the years of allegations leveled against the disgraced singer.

But his last 3 tracks might be the most revealing — it’s a 3-part piece called “I Admit it (I Did It),” where he unloads a ton of stuff he’s done in the past. He put the full 19-minute track on SoundCloud back in 2018, but this marks the first time it’s made it to Apple or Spotify. 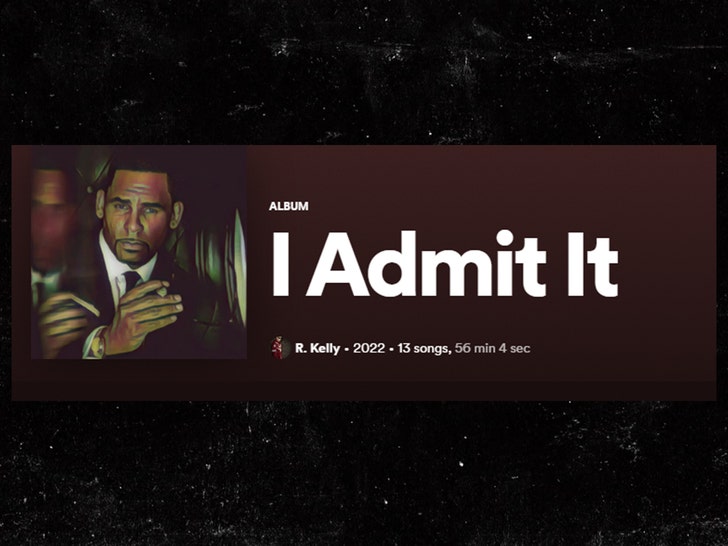 In it, R. Kelly talks about helping people that ended up turning against him … before admitting to a laundry list of things — including “I done f***ed with a couple of fans” and says he even slept with his girlfriend’s friend.

He digs even deeper, “How they gon’ say I don’t respect these women when all I’ve done is represent” … and “You mad I’ve got some girlfriends.”

While it’s unclear exactly who he’s talking about, he also seems to blame the parents of one of his female flings for introducing them. Saying, “And if you really, really wanna know. Her father dropped her off at my show. And told this boy to put her on the stage. I admit that she was overage.”

As we reported, Spotify made the call back in 2018 to stop promoting his music when allegations about running a sex cult continued to pick up steam … but it sounds like R. Kelly’s made it back to the platform with his telling tracks.