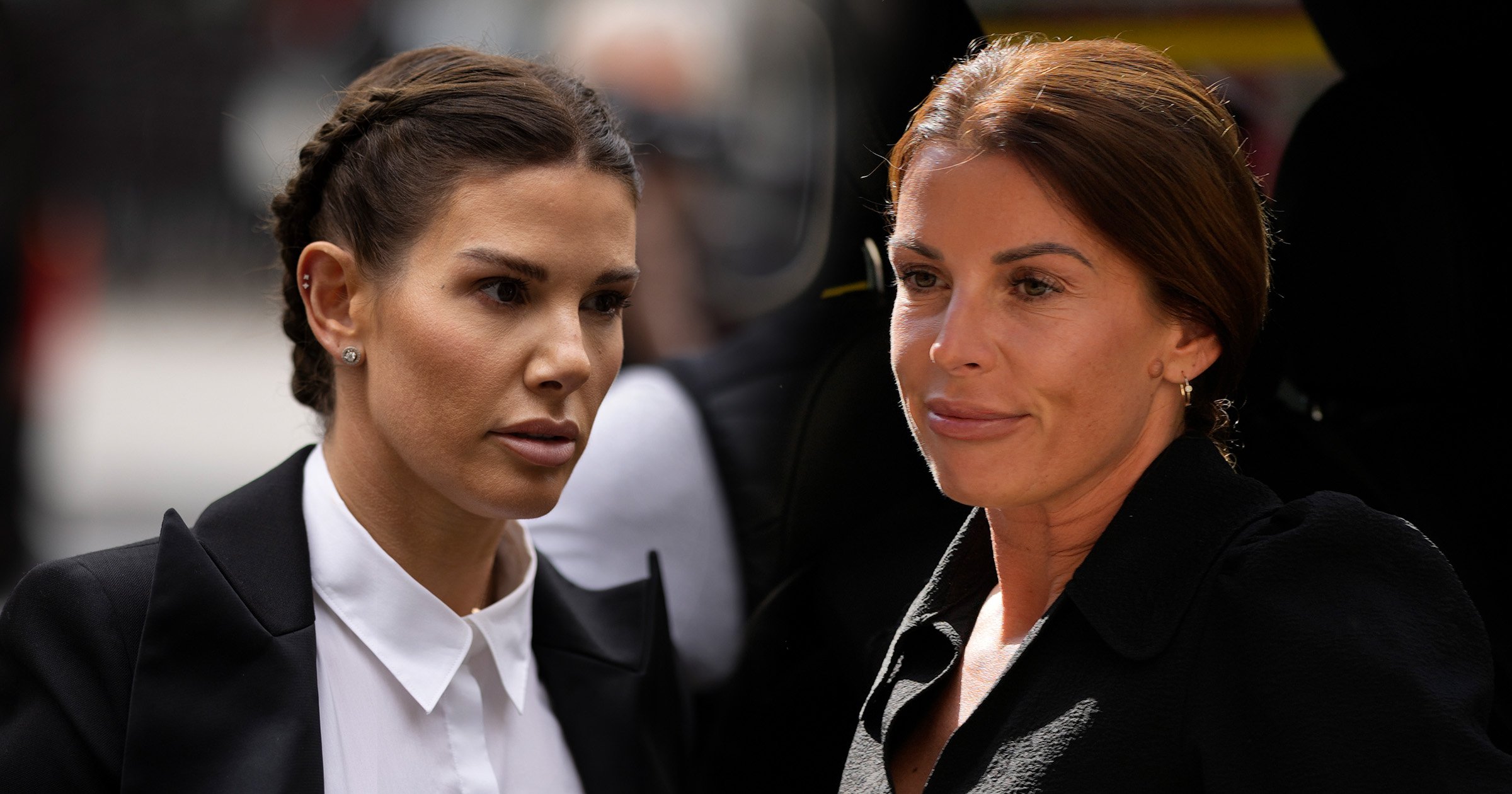 Rebekah Vardy has spoken out after losing to Coleen Rooney in her Wagatha Christie trial.

It was confirmed on Friday afternoon that Vardy – wife of professional footballer Jamie Vardy – had lost her libel cast against Rooney – who’s married to retired England star Wayne Rooney.

While Rooney has since said it was ‘not a case I ever sought or wanted’, Vardy has shared that she is ‘extremely sad and disappointed’ following the verdict.

The legal battle began in 2019 when Rooney accused former friend Vardy of leaking ‘false stories’ about her private life to the press, with the Liverpudlian carrying out a months-long ‘sting operation’ on social media to get to the bottom of her suspicions.

After Rooney was dubbed ‘Wagatha Christie’, Vardy vehemently denied the claims against her and sued for libel.

In a statement issued after the judge did not rule in her favour, Vardy said: ‘I am extremely sad and disappointed at the decision that the judge has reached.

‘It is not the result that I had expected, nor believe was just. I brought this action to vindicate my reputation and am devastated by the judge’s finding.’

She added: ‘The judge accepted that publication of Coleen’s post was not in the “public interest” and she also rejected her claim that I was the “Secret Wag”. But as for the rest of her judgement, she got it wrong and this is something I cannot accept.’

Vardy also issued a plea to those who have subjected her to abuse to stop, and indicated she does not intend to appeal against the ruling, saying ‘the case is over’.

She continued: ‘As I explained in my evidence I, my family, and even my unborn baby, were subjected to disgusting messages and vile abuse following Coleen’s Post and these have continued even during the course of the trial.

‘Please can the people who have been abusing me and my family now stop. The case is over.’

She thanked everyone who has supported her.

Speaking out herself after the judge ruled in her favour, author and TV presenter Rooney said she is ‘pleased’, but ‘never believed it should have gone to court’.

‘It was not a case I ever sought or wanted. I never believed it should have gone to court at such expense in times of hardship for so many people when the money could have been far better spent helping others’, Rooney said.

She added that the ‘leaks from my private Instagram account began in 2017’ and they ‘continued for almost two years’, ultimately ‘intruding on my privacy and that of my family’.

‘Although I bear Mrs Vardy no ill-will, today’s judgment makes clear that I was right in what I said in my posts of October 2019’, Mrs Rooney said.

‘I would like to thank all of my legal team, my family, friends and everyone who supported me, including the public, through this difficult and stressful time.’

In her ruling, Judge Mrs Justice Steyn said that while it was ‘likely’ that Vardy’s former agent Caroline Watt ‘undertook the direct act’ of passing information to The Sun newspaper, ‘the evidence… clearly shows, in my view, that Mrs Vardy knew of and condoned this behaviour, actively engaging in it by directing Ms Watt to the private Instagram account, sending her screenshots of Mrs Rooney’s posts, drawing attention to items of potential interest to the press, and answering additional queries raised by the press via Ms Watt’.

The judge added: ‘In my judgment, the conclusions that I have reached as to the extent to which the claimant engaged in disclosing to The Sun information to which she only had access as a permitted follower of an Instagram account which she knew, and Mrs Rooney repeatedly asserted, was private, suffice to show the single meaning is substantially true.’

The Sun newspaper runs a number of articles about Rooney, including that she travelled to Mexico to look into baby ‘gender selection’ treatment, her plan to revive her TV career and the flooding of her basement.

Rooney shared a statement to her public-facing Instagram and Twitter, alleging that her fellow WAG Vardy had been selling fake stories to the press.

In a rather genius plot, Rooney revealed that she had been sharing fake stories to her own Instagram stories after suspecting that one of her followers was leaking tales from her private account to the press.

Saying of her suspicions someone had been selling the stories to the tabloids, Rooney went on, in what has now become pop culture canon: ‘I have saved and screenshotted all the original stories which clearly show just one person has viewed them. It’s…… Rebekah Vardy’s account.’

Vardy immediately fired back with her own statement, denying she had leaked any stories.

In a tearful appearance on ITV’s Loose Women, Vardy – who previously said she wanted a forensic investigation into the leaks – says the stress of the dispute caused her to have severe anxiety attacks and she ‘ended up in hospital three times’.

Rooney says in a statement that she does not want to ‘engage in further public debate’.

Vardy’s lawyers allege she ‘suffered extreme distress, hurt, anxiety and embarrassment as a result of the publication of the post and the events which followed’.

November 19-20, 2020: The libel battle has its first High Court hearing in London

A judge rules that Rooney’s October 2019 post ‘clearly identified’ Vardy as being ‘guilty of the serious and consistent breach of trust’.

Mr Justice Warby concludes that the ‘natural and ordinary’ meaning of the posts was that Vardy had ‘regularly and frequently abused her status as a trusted follower of Mrs Rooney’s personal Instagram account by secretly informing The Sun of Mrs Rooney’s private posts and stories’.

February 8-9, 2022: A series of messages between Vardy and her agent Caroline Watt are revealed at a preliminary court hearing

The court is told Vardy was not referring to Rooney when she called someone a ‘nasty bitch’ in one exchange with Watt.

February 14, 2022: Rooney is refused permission to bring a High Court claim against Watt

Rooney wasn’t granted permission to bring a claim against Watt for misuse of private information to be heard alongside the libel battle.

A High Court judge, Mrs Justice Steyn, says the bid was brought too late and previous opportunities to make the claim had not been taken.

The High Court is told Watt will not give evidence at the then-upcoming libel trial, as the case returns for another hearing.

The agent revokes permission for her witness statement to be used, and withdraws her waiver which would have allowed Sun journalists to say whether she was a source of the allegedly leaked stories.

April 29, 2022: Rebekah Vardy ‘appears to accept’ that her agent was the source of allegedly leaked stories

Rooney’s barrister David Sherborne tells the High Court, Vardy ‘appears to accept’ her agent Watt was the source of the allegedly leaked stories, and argues that a new witness statement submitted by Vardy suggests Watt was the source.

Vardy claims she ‘did not authorise or condone her’.

Vardy’s lawyer Hugh Tomlinson says the statement did not contain ‘any change whatever in the pleaded case’, with her legal team having no communication with Ms Watt.

Vardy and Rooney come face to face in court as the trial of their libel battle takes place at the Royal Courts of Justice in London before Mrs Justice Steyn. Both women give evidence, as revelations from the case make daily headlines across the British press.

Day One – The Chipolata

The first day of the trial ends with Mr Sherborne dramatically revealing a News Of The World article in which Vardy talked about a claimed sexual encounter with singer Peter Andre. The barrister reads the headline to the court, saying: ‘Peter’s hung like a small chipolata, shaved, slobbery, lasts five minutes’. Vardy responds by saying she was ‘forced into a situation’ by her ex-husband.

Outside the case, Andre would later go on to address the article, voicing his upset the comments about his body were repeatedly brought up after 15 years.

An agreed 313-page bundle of evidence is released including pictures from Rooney’s Instagram account and screenshots where Vardy complained to her husband Jamie Vardy that she was being made a ‘scapegoat’ during Euro 2016.