Rep Eric Swalwell Denies Farting During Live MSNBC Interview: 'This Too Shall Pass' 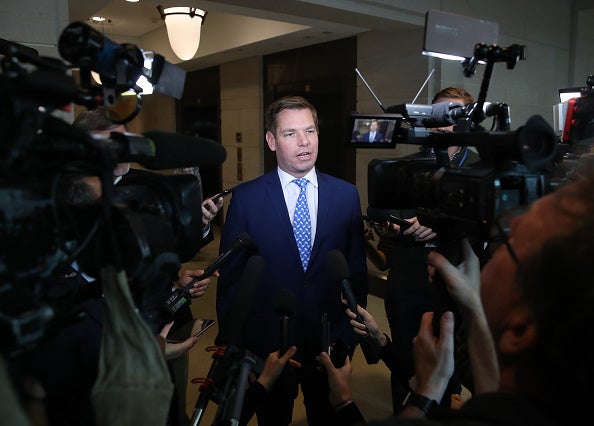 WASHINGTON, DC – NOVEMBER 07: Rep. Eric Swalwell (D-CA), talks to the media outside of a closed-door hearing at the U.S. Capitol on November 7, 2019 in Washington, DC. the Chairman of the House Intelligence Committee, Adam Schiff (D-CA) has announced that public hearings will begin next week in the impeachment inquiry against U.S. President Donald Trump.(Photo by Mark Wilson/Getty Images)

Rep. Eric Swalwell (D-Calif.) denies that the sound heard by viewers of MSNBC’s “Hardball” on Monday night was, in fact, him farting.

The show’s Twitter account put out a statement after Swalwell’s appearance Monday night claiming the noise, which was causing a stir online, was actually just host Chris Matthews’ mug scraping across the desk.

“Sorry to disappoint the conspiracy theorists – it was the #hardball mug scraping across the desk. Get yours today and let’s get back to the news!” the account tweeted, linking to an online shop where viewers could get a “Hardball” mug of their own.

Swalwell, a Democrat from California, retweeted that, adding his own declaration in the style of the president: “TOTAL EXONERATION!”

Chrissy Teigen, like countless others who replied to the “Hardball” account or tweeted their own theories on the origin of the noise, wanted none of that.

“No it’s a fart don’t ruin this,” the author wrote, which earned her a Tuesday morning response from Swalwell: “This, too, shall pass…”

As of Tuesday morning, #ShartGate and #FartGate were both trending nationally on Twitter.

So much for the “Hardball” plea for the American public to “get back to the news.”

Watch here, via Media Matters’ Andrew Lawrence, and decide for yourself.