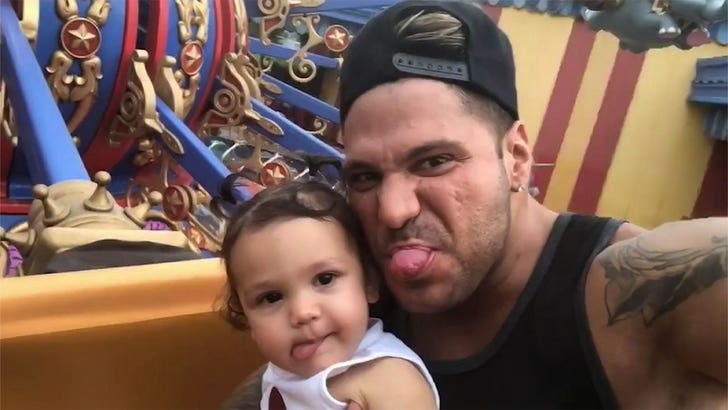 Ronnie Ortiz-Magro is making the most of the time he has left before his baby mama gets extended protection for her and their daughter — and not a second too soon either.

The “Jersey Shore” star is at Disney World in Orlando right now, where he’s riding rides with his 1-year-old, Ariana, and cheesing for the camera with her. Ronnie posted a video of him and Ariana riding Dumbo together … and she looked happy to be out with dad.

The timing is nothing short of perfect. Up until now, Ronnie wasn’t permitted to go near Jen Harley — who’s been caring for Ariana lately following Ronnie’s arrest — due to an emergency protective order cops issued … which just expired Friday.

In other words … no harm, no foul here. Ronnie’s not in violation of anything by being with Ariana. However, we were told he’d steer clear of the family pending his arraignment.

TMZ broke the story … Ronnie isn’t planning to fight Jen as she seeks to extend the protective order, not just for herself but Ariana too. Doesn’t look like it’s been granted yet though … and Ronnie’s capitalizing on some father-daughter QT in the meantime.

This seems to be the first sliver of happiness we’ve seen out the nightmarish situation that unfolded between Jen and Ronnie — which allegedly resulted in injuries, not to mention possible criminal charges after Ronnie was booked for kidnapping.

The parents might be done for good, but it looks like they can still get on the same page about their kid for at least one day. Assuming this hand-off went smoothly, anyway.