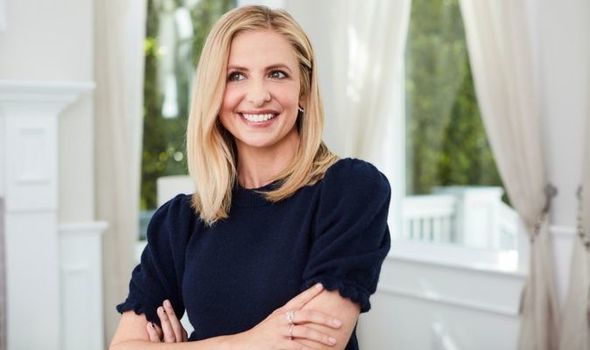 Celebrities aren’t so different from us, really. Take Sarah Michelle Gellar. When we catch up with the actress live from her home in Los Angeles, we discover she’s been doing pretty much the same as everyone in lockdown – bickering with the husband, slobbing in leisurewear and trying to keep her kids busy with box-set binges. There are a couple of differences, though. Firstly, the hubby – the other half of one of Hollywood’s premier power couples – is A-list actor Freddie Prinze Jr. Secondly, the TV retrospective she’s been treating her eldest to is none other than Buffy The Vampire Slayer, the 90s show that shot Sarah to stardom.

“My daughter had been asking about it for a while,” she says of 10-year-old Charlotte. “I haven’t watched it in years so I had to ask a couple of my friends, who remember stuff better than I do, whether she would be ready for it.”

“We felt that the high-school years were appropriate but I don’t think she’s ready for the rest of it yet. It gets quite… adult. So we’ll see how well she takes it when she finds out she’s going to have to wait for the rest of it. I’m not sure how well that’s going
to go down.”

It’s been quite a surreal experience for Sarah, now 43, sitting alongside Charlotte and watching her younger self fighting the forces of evil.

“I’m so proud of Buffy. What’s amazing about the show is that it takes some distance from it to really understand the impact that it’s had. Watching it again now I realise just how relevant it still is – and how ahead of its time it was.”

To the wider world, Sarah will always be Buffy Summers, but to Charlotte and seven-year-old Rocky she’s simply Mom, a reality that constantly pulls her in two directions.

“There are two versions of me – Sarah Michelle Gellar and Sarah Prinze. I think the fame side can be hard for the kids.

“Before Covid, my daughter turned to me on a day out and said, ‘Can we just have one day where people don’t want to talk to you?’” she recalls.

It’s this sort of self-awareness that stirs Sarah’s protective maternal instincts. “She’s growing so fast. I don’t like it. I’d like her back in my belly,” she adds, only half-joking.

Lockdown has brought both its challenges and joys to the Prinze-Gellar household. “There’s no rule book for parenting right now. There’s no real path. I feel like some days I’m failing at trying to keep them busy,’ the actress admits.

“And home schooling is ageing me.”

Sarah’s Instagram account is littered with hilarious “quarantips” on bringing up children in lockdown, suggesting drinking games such as taking a swig “every time you hear someone yell ‘Mom!’”

So has alcohol been her guilty pleasure lately? “Oh, I don’t feel guilty,” she says, not missing a beat. “I believe everything in moderation.”

Jokes about quarantinis aside, she’s cherishing having so much time for simple family pleasures like bike rides and days by the beach.

“Freddie is an amazing dad,” she says. “Having kids is the greatest thing either one of us has ever done.” 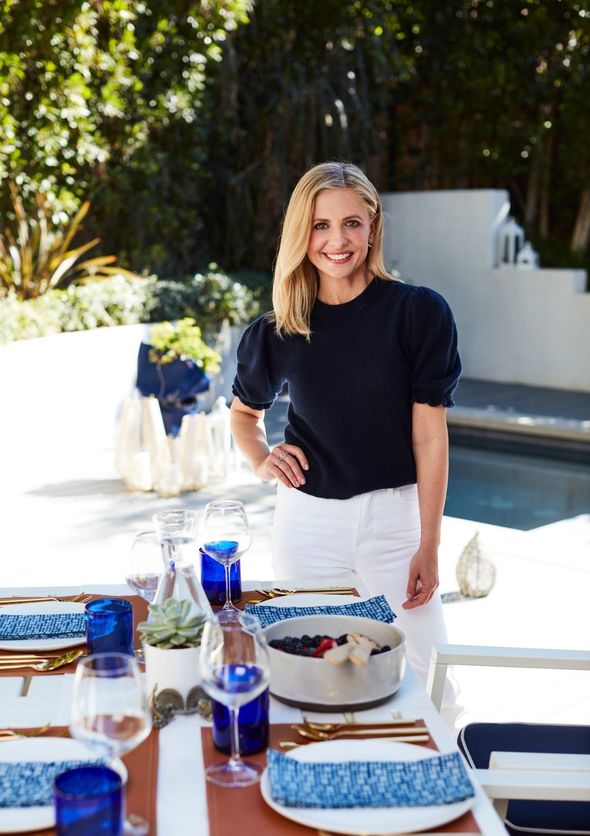 Their 18-year marriage seems happier than ever, too, thanks to lockdown.

“I don’t think we’ve spent this much time together since before we had children,” she laughs. “There are times, I’m sure, when he feels he would rather see anyone else’s face apart from mine. But there are parts of that that have been amazing.”

Like, for instance, having her meals cooked for her by Freddie, who’s a dab hand in the kitchen, having been to culinary school before finding acting fame.

“One of the good things that’s come out of Covid is that we’ve had lots of time to cook our favourite food because nobody is racing to get home in time for dinner,” Sarah says.

“He does this special pasta and pancetta dish for me. It’s delicious.”

Cosy lockdown feasts aside, the secret to their successful marriage is “not talking about it”, she says, very politely.

“You have to have some things that are private.” However she’s happy to relate the story of how the two got together in the first place – and how it might never have happened.

She and Freddie had become friends when they were filming I Know What You Did Last Summer in 1997. Three years later they were due to have dinner with a mutual friend from out of town who missed her flight and stood them up.

Sarah remembers, “I was like, ‘Do you want to cancel?’ and he said, ‘No, let’s go and have dinner, we haven’t seen each other in a while.’ And I think that was the first time we realised that this is different than it was before…”

She reveals Freddie has always been her biggest supporter, particularly during the periods in which she’s battled with body-confidence issues.

“After I had my second child, I was just struggling, like a lot of mums are with two young kids,” she says.

“My body had really changed. Obviously, your body expands in that middle region. To create life is amazing, but then it’s hard to get back to where you were.”

Added to that was the pressure of being publicly scrutinised and body-shamed. 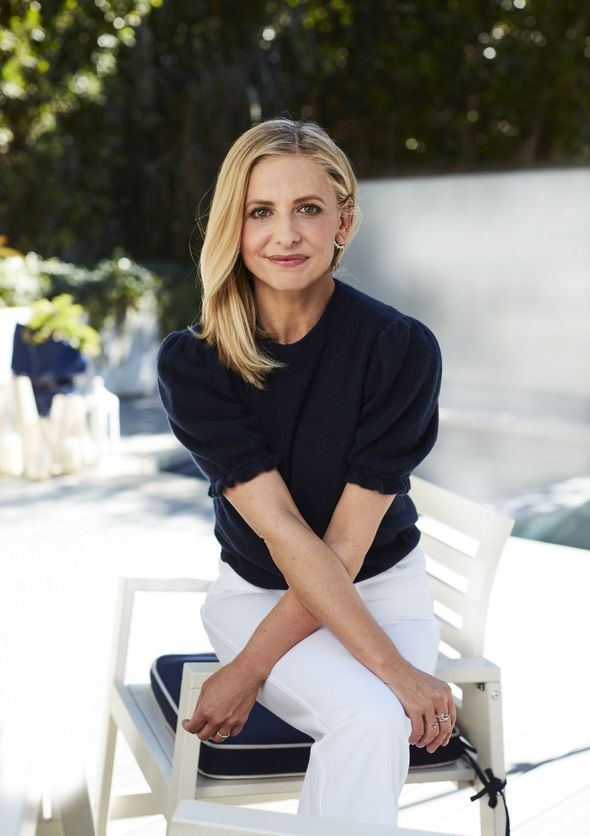 “With social media, everyone is given this platform to have an opinion about how you look,” she says.

“People are following you, they want to see how long it’s going to take for your body to bounce back after having kids – and it’s definitely an unrealistic ideal. I tried to block it out as much as I could but I’d be lying if I said those comments didn’t hurt or that I was immune to them.”
“And that is obviously going to affect how you feel about yourself.”

Going to the gym was only a partial solution, she adds. “At a certain point, probably less than a year after my second child, I realised all the exercise in the world can’t dissolve those pockets of fat.”

Surgical options were rejected out of hand, but Sarah was more than happy to try CoolSculpting, a safe, noninvasive treatment to physically freeze away fat on her thighs and midriff.

Special applicators are attached to the target areas, delivering precisely controlled cooling to freeze and destroy fat cells under the skin, which the body then eliminates naturally.

“It was the easiest 30 minutes of my life,” she recalls.

“I just got to lie on a comfy table and read my book. The treatment didn’t hurt, it just felt cold for a few seconds and then I didn’t feel anything. It was very peaceful. I was just happy to have a few minutes to myself, and then I got to leave feeling better about myself – a win-win.”

Sarah saw the results of the procedure within days.

“I don’t weigh myself, I don’t measure myself but I could tell within a week how my clothing was feeling and fitting, how my jeans were buttoning back up,” she reveals. It was exactly the kick-start she needed.
“I was like, ‘I’m gonna go to the gym and work even harder now.’ It gave me my confidence back in such an easy and noninvasive way.”

Sarah is delighted with the difference to both her flanks – “that’s a terrible word for it, though, I need a better one” – and her inner thighs.

“They’re a really hard area because you do develop fat over time in that area and it’s a difficult muscle to exercise.”

Naturally, Freddie hasn’t been slow to shower his beautiful wife with compliments. “He’s incredibly supportive,” she says. “He would never pinpoint something I felt bad about, but he’ll say you look great.”

She certainly does. As well as being in fabulous shape, Sarah looks far younger than her years, a fact that cheered her up enormously when she was turning 40.

“The idea of it affected me beforehand, but then I actually got carded in a hotel on my 40th birthday,” she laughs.

“I thought it was a joke. I thought somebody had called ahead. But they wouldn’t serve me and I had to go to my room and get my driver’s license. The guy nearly died when he saw it.”

“He was like, ‘Oh my God I didn’t recognise you. I thought you were the nanny.’ So that was a good day.”

Sarah attributes her youthful looks to genetics, a good diet, sunscreen and lots of water.

“And it comes from being happy. I think that shows. I also think during Covid my skin has never looked better because I almost never put make-up on for the first time in years. I’ve always been on set with heavy make-up.”

None of her fresh-faced beauty has been given a boost from Botox, either. “Never say never, right? But for now it’s all mine,” she says. “I can move my forehead. But I’m not against anything.”

It doesn’t seem to us that she needs any help at all. Forget vampires – these days, Sarah is slaying the ageing process and winning.

Sarah Michelle Gellar is an ambassador for CoolSculpting. Prices start at £600 depending on the individual and area being treated. To learn more about CoolSculpting, visit coolsculpting.co.uk.