Donald Trump lost the 2020 presidential election to Joe Biden, but he has since been making moves for a potential return to the White House. Now living in Florida, Trump has picked up the pace when it comes to fundraising and holding rallies, getting back out on the road perhaps in an effort to keep himself relevant for a potential 2024 run. According to Reuters, Trump has raised more than $90 million since losing the election. The outlet described the fundraising results “one of the biggest hauls by any Republican group.”

Thus far, Trump has been fairly coy about his plans to throw his name into the 2024 presidential election ring, and his supporters have been waiting to get some kind of official word that he is planning to run. On June 1, 2021, Trump made his official return to the politics sphere, serving as the marquee speaker at the North Carolina Republican Party’s state convention, according to NBC News. At the time, Trump adviser Jason Miller told the outlet that “if the president feels like he’s in a good position, I think there’s a good chance that he [runs again].”

While Trump has still not confirmed his 2024 plans for certain, Sean Spicer revealed his insight on what’s to come. Keep reading for more. 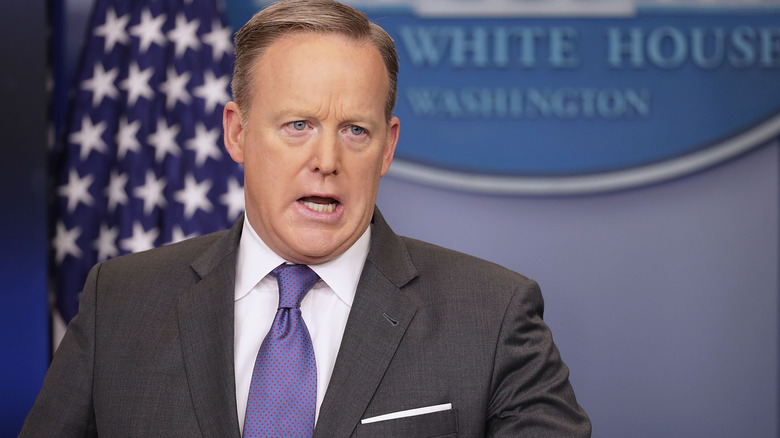 In an interview with the Washington Examiner, Sean Spicer revealed that Donald Trump will be running for president in 2024. “He’s in,” Spicer told the outlet matter-of-factly. “A couple of months ago, I wasn’t sure. Now … there needs to be something that will keep him out,” Spicer said, according to the Guardian. As the outlet points out, Spicer, who once served as White House press secretary, did not say whether or not he had received confirmation from Trump or if he was simply making an educated guess about what’s to come.

In a June 2021 article for Newsmax, John McLaughlin wrote that Trump was holding strong with “80 percent GOP primary vote support,” while Joe Biden was “slipping,” based on polls conducted by the outlet. Those polls also indicated that “72% of all Republicans want to see Donald Trump run for President again in 2024,” and that “80% of Republican primary voters, including independents who vote in Republican primaries, would support President Trump for the Republican nomination if he ran again in 2024.”

If Trump does run for president, he will go up against Biden once more. Unless Biden decides not to run. Then, according to Newsmax’s poll numbers, Trump is most likely to run against Vice President Kamala Harris.