After her turn hosting Saturday Night Live for the first time, pop star Selena Gomez stepped out for the after party in a sexy, strapless black dress by Michael Stewart that emphasized her incredible figure with a torso-hugging bodice. The dress featured a thigh-high slit, framing Gomez’s legs and drawing attention to her silver heels.

Gomez was smiling as she walked through the crowd, her loose bob moving around her face. Her accessories were minimal and she wore a natural makeup palette, but had a fun black manicure to match her outfit for the night. 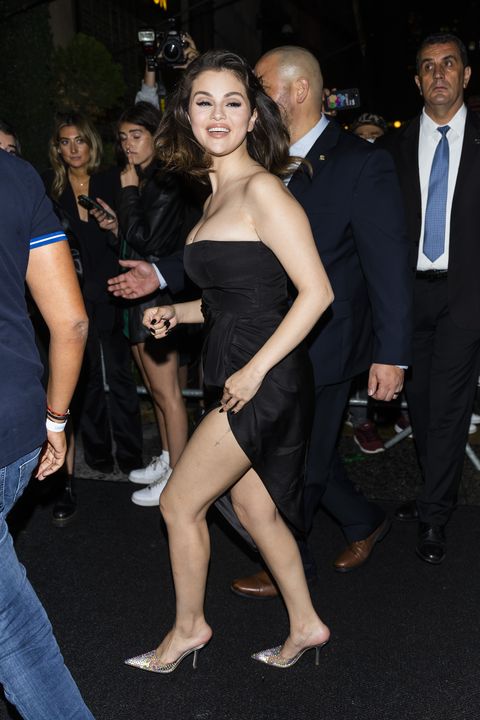 The after party was attended by Gomez’s close friend Cara Delevingne, Lewis Hamilton, and musical artist Post Malone. Gomez was also supported by some celebrity friends during the show, with her Only Murders In the Building co-star Steve Martin showing up for a pre-recorded sketch in which he played the inventor of the whoopee cushion and other prank toys.

In her opening monologue, Gomez shouted him out as well, saying, “I was so honored to work with Steve Martin and Martin Short, especially after I Googled them to find out who they were.”

She then channeled the spirit of friend Miley Cyrus, doing a spot-on impression of the singer. Gomez started by saying she asked Cyrus for advice on hosting SNL as a veteran of the gig.

“She said, ‘Just be yourself and have fun,’’ Gomez said, imitating the distinctive husky voice of her buddy. “I was like, ‘Miley, is that just an excuse for me to do an impression of you on the show?’ And she’s like, ‘Hell, yeah, I’m Miley Cyrus.’”

Gomez used her opening monologue to joke about being single, too, saying, “One reason I’m really excited to host SNL is because I’m single. And I heard that SNL is a great place to find romance. Emma Stone met her husband here. Scarlett Johansson and Colin Jost. And Pete and Machine Gun Kelly.”

She added, “And since I don’t really want to try the dating apps I just want to put it out in the universe that I’m manifesting love and I would like to say that I’m looking for my soulmate. But at this point I will take anyone.”

At that, a bunch of people in the SNL cast tried to connect with Gomez right then and there, but she declined and said she’d see them at the after party.