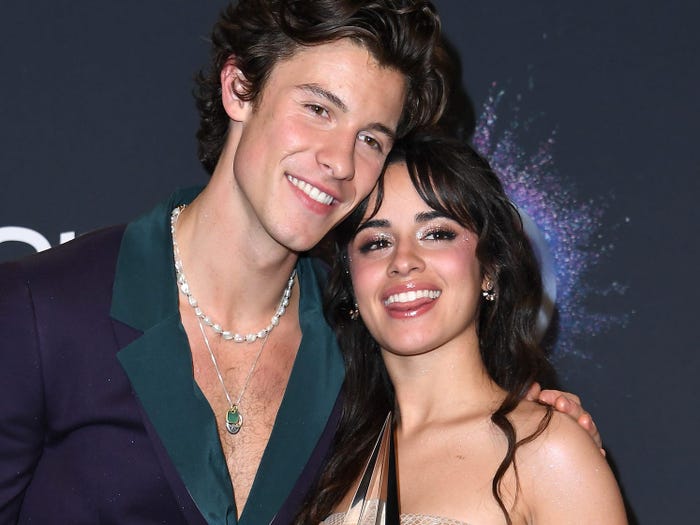 Shawn Mendes says his own insecurities led him to feel self-conscious about singing in front of Camila Cabello when they first started dating.

"The hard part about dating Camila was only after five or six months being able to sing a small lullaby around her because I didn't want her to hear me sound bad," Mendes said while participating in a new episode of the podcast titled "Armchair Expert With Dax Shepard."

"It was exhausting," the 22-year-old "Wonder" singer added. "I couldn't even do vocal warm-ups around her or anything because I was so terrified of not sounding like I was a perfect, auto-tuned human being."

His comments were sparked by Shepard asking the musician, who didn't date too much pre-fame, "Did you have any fear that you wouldn't be interesting enough for anyone offstage for anyone?"

In response, Mendes said, "No, I actually have always really liked myself. I mean, I've had a lot of insane insecurities, but my insecurities had more to do with my craft and my career than my humanness."

Elsewhere in the lengthy interview, Mendes spoke candidly about his relationship with Cabello, who he met in 2014. They collaborated on the 2015 track "I Know What You Did Last Summer" and began dating in 2019, the same year that they released their second duet, "Señorita."

Mendes said that dating a fellow musician has positively impacted him and they relate in many ways because they're both involved in the entertainment industry.

He also said that they constantly apologize to each other for letting their egos get in the way and have "settled each other down to a place of humility."

Additionally, the singer said that having her on stage with him makes his performances better "all the time."

Recently, Mendes opened up about his insecurities during an interview with Access Hollywood and said that he loved Cabello for years, but didn't have the courage to tell her.

"I had five years of fear of getting rejected by her that just stopped me from doing it every time, or just confidence," he said. "It just took a lot. It took a long time of preparing. I had a five-year warm-up to finally be able to tell her how I felt."