Friends and family members of the late Sopranos actor Tony Sirico gathered in Brooklyn to pay their respects to the wise guy–turned–actor.

Sirico’s brother, Father Robert Sirico, delivered words of remembrance at the ceremony and joked, ‘My friends, if Paulie Walnuts can steal heaven, so can you and I,’ according to the New York Post. 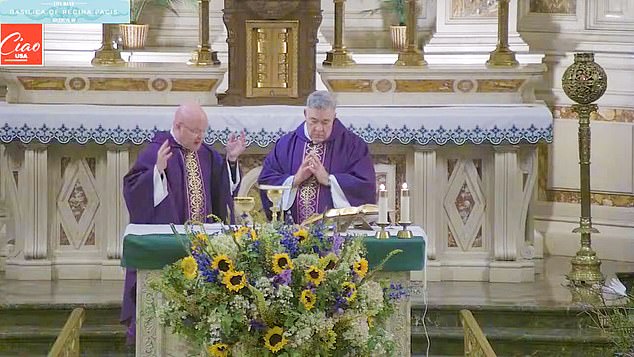 Saying goodbye: The Sopranos star Tony Sirico’s life was celebrated at his funeral mass at Basilica of Regia Pacis in Brooklyn on Wednesday morning, with his brother Father Robert Sirico delivering words of remembrance

Siricio, who was born Gennaro Anthony Sirico Jr. on July 29, 1942, had his funeral mass at the Basilica of Regia Pacis in Brooklyn broadcast live, and he will be buried at Calvary Cemetery in Queens.

During his address, Robert noted the ‘loyal and exuberant fans’ who had joined Sirico’s family, friends and colleagues at the mass.

In addition to Bracco, who was second billed after the late star James Gandolfini and play Tony Soprano’s psychiatrist and therapist, and Van Zandt, who starred as his consiglieri Silvio Dante, Joseph Gannascoli also paid his respects.

He appeared as Vito Spatafore, who rose to the rank of captain in Tony Soprano’s criminal enterprise. 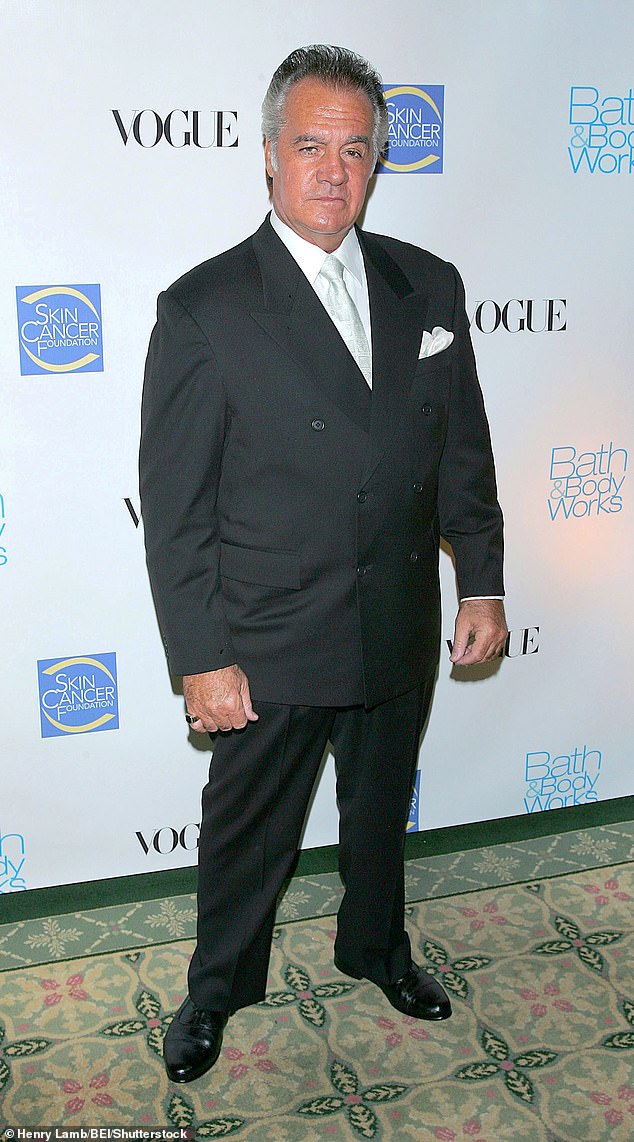 Rising star: Sirico was a former wise guy who turned his life around with a role in Goodfellas and other projects, before his star turn as Paulie ‘Walnuts’ Gualtieri on HBO’s The Sopranos; seen in 2006 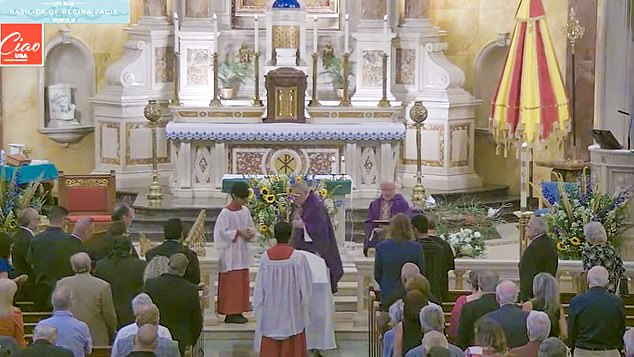 Light-hearted: Tony’s brother Robert joked, ‘My friends, if Paulie Walnuts can steal heaven, so can you and I,’ according to the New York Post

Tony Daniels, a voice actor known for playing Gambit on the animated X-Men series, and Angel Salazar, who appeared in Scarface, also paid their respects.

While speaking to the Post, Van Zandt described Sirico as one of his ‘lifelong best friends’ and ‘one of a kind.’

During his speech at the mass, Tony’s brother Robert revealed that years earlier, Tony had refused to take communion and shared that he hadn’t gone to confession in quite some time. 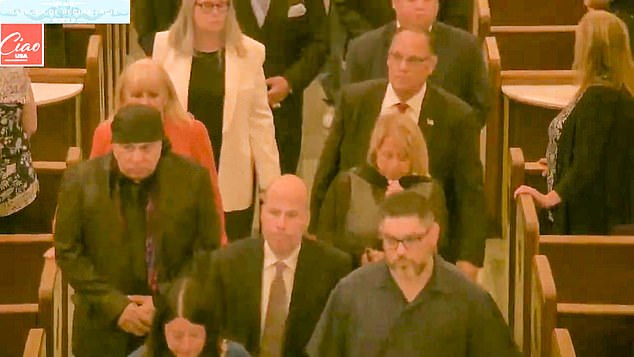 Costar: Among those paying their respects was Steven Van Zandt (front left), who played Silvio Dante in The Sopranos and is also a guitarist in Bruce Springsteen’s E Street Band 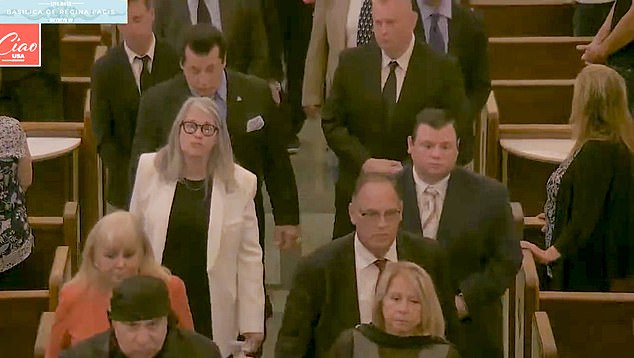 Star power: Lorraine Bracco (white suit on the left), who played Tony Soprano’s psychiatrist and therapist, was also in attendance

But the priest said that he ‘sensed that the end was coming’ during a visit to his actor brother in Florida weeks before his death, and he consented to confess his sins at the time.

Sources revealed to the Post that Sirico had been stricken with dementia and his daughter Joanne, who attended the funeral mass, had been caring for him in Florida.

The outlet noted that one attendee appeared to collapse into a chair, while a friend claimed that they were having a panic attack.

‘Tony was a friend from the Bay Ridge neighborhood who lived up the street from him,’ they told the Post. 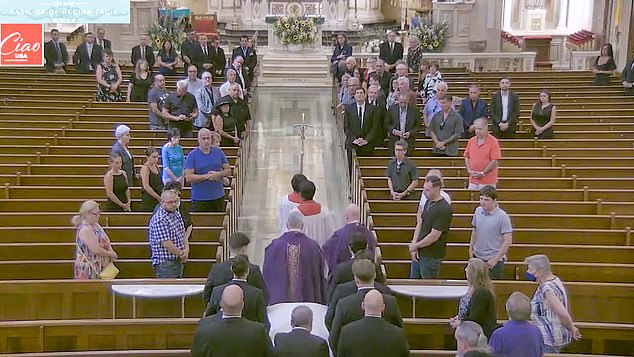 Saying goodbye: Robert revealed that weeks earlier, he convinced his brother to take communion. He was living with his daughter in Florida at the time while battling dementia 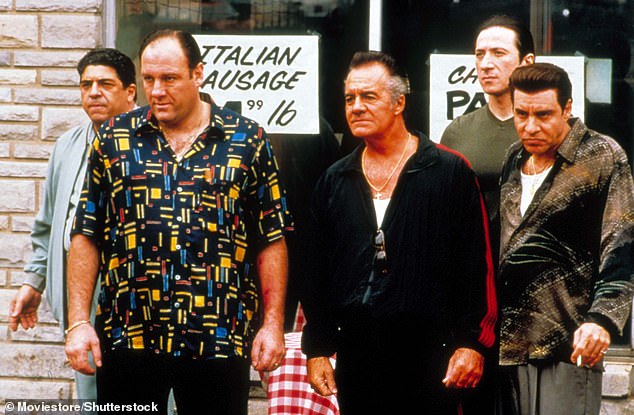 The whole gang: In addition to Bracco and Van Zandt, Sopranos actor Joseph Gannascoli, who played Vito Spatafore, paid his respects; still from The Sopranos

Following the ceremony, the actor Artie Pasquale, who briefly appeared on The Sopranos, shared a tribute for the late actor.

‘Tony was wonderful: He made everyone laugh and could be serious, but he always brought some life to the scene, or whatever situation,’ he said. ‘We’re gonna miss Tony. He was just always dressed the best. Always had the best tie, but he was great and he’s really going to be missed.’

The Sopranos creative team, including David Chase, who created the series, wrote several episodes and directed the iconic pilot and series finale, paid tribute to Sirico with a large floral arrangement at his wake on Tuesday. 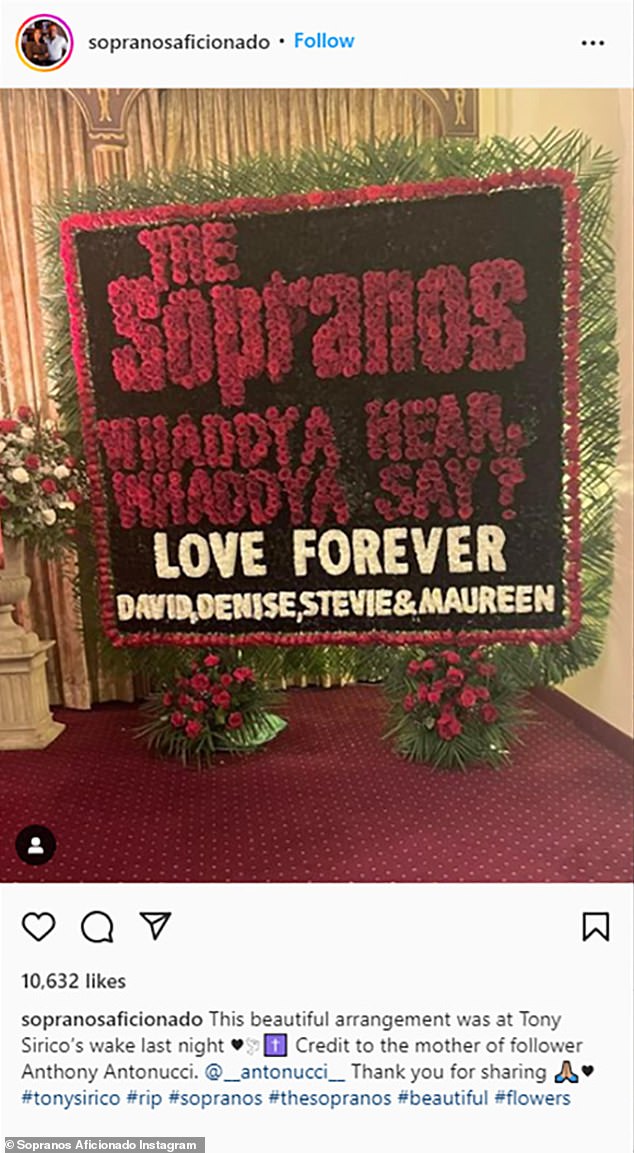 Tribute: The Sopranos creative team, including creator David Chase and Van Zandt, paid tribute to Sirico with a large floral arrangement at his wake on Tuesday