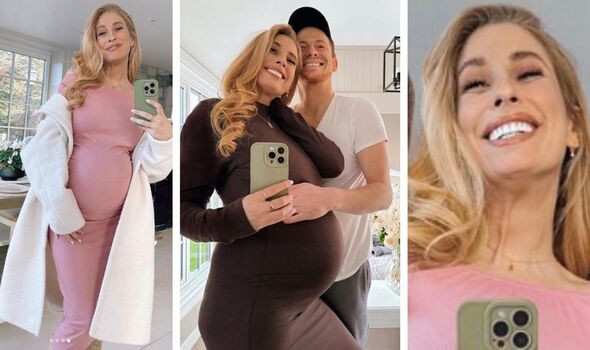 It was a double celebration for Joe Swash and Stacey Solomon yesterday as they marked both his birthday and the development of their baby – their third child together and Stacey’s fifth. The new arrival is due to make an appearance within a matter of days.

Stacey Solomon, 33, looked ecstatic as her husband Joe Swash placed a protective hand over her bump and planted a kiss on her cheek as she prepares to give birth for the fifth time.

The overjoyed Loose Women star had thought her one-year-old daughter Rose would be her last – but last year, a pregnancy test revealed they were in for an unexpected surprise.

Meanwhile, Joe is marking a milestone – his 41st birthday – which Stacey acknowledged in a gushing caption shared with over five million followers.

The post received almost 300,000 likes in a matter of hours, as fans marvelled at the ever-growing bump making its presence known, while Stacey posed in a brown bodycon dress.

Stacey Solomon paid tribute to her father for making the happy couple’s “child-free” dinner possible, gushing: “Thanks to the legend that is Dave my dad for babysitting the brood love you.”

Stacey Solomon also celebrated the special women in her life

Stacey Solomon is a fan of matching mother and daughter themed outfits and was delighted when her first daughter, Rose, arrived and the process could begin. She wrote affectionately on Instagram last week: “I only wish I had my own adult sized tutu so we could be even more matchy!”

Stacey Solomon didn’t divulge her pregnancy news until more than eight months had passed – and she admitted that it had been a while before she realised she was expecting.

Joe Swash has a 15-year-old son, Harry, from a previous relationship with ex-partner Emma Sophocleous, while Stacey had two children before she fell for Joe – her eldest, 14-year-old Zachary, whom she had with childhood sweetheart Dean Cox, plus 10-year-old Leighton, whose dad is Aaron Burnham. Together, Stacey and Joe share three-year-old son Rex and one-year-old daughter Rose – and their third baby is soon to follow.