It didn’t take long for the Colorado Avalanche to leave their mark on the Stanley Cup — and not in a good way — ’cause the new NHL champions dented the iconic trophy just 5 minutes into their wild celebration!!

The Avs beat the Tampa Bay Lightning in six games to secure their third title in franchise history on Sunday … beating the Bolts in a 2-1 contest.

The champs were rightfully pumped after securing the ‘ship … and star wing Nicolas Aubé-Kubel was a bit too pumped — ’cause when it came time to take a group pic with Lord Stanley, the dude slipped up on the ice and dented the hardware in the process!!

The hilarious moment happened just minutes after the final buzzer … so ya can’t even blame booze for the mishap.

Either way, the players looked on in horror as the trophy made contact with the ice … but the good news is it’ll be fixed sometime in the future, according to the keeper of the cup, Phil Pritchard.

As for the rest of the celebration, it was insane — the players danced and sang their asses off to “Dancing in the Moonlight” as champagne went flowing throughout the locker room … all while preventing the Cup from getting additional damage. 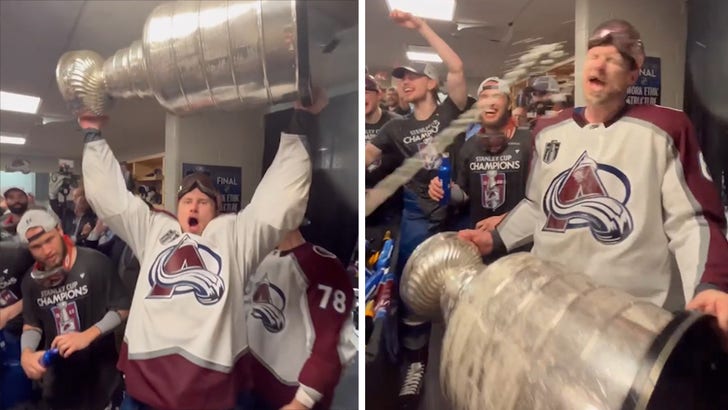 The folks back home in Denver were getting lit as well — setting off fireworks and having a ball to celebrate the huge win.

Apparently, the fans were fairly well behaved during the celebration as well … ’cause the Denver Police Dept. tells TMZ Sports there was only one arrest made in relation to the partying due to “discharging fireworks.”

Congrats on winning it all, Colorado … but please, take care of Lord Stanley.