Steve-O has recalled some rather grim stunts from upcoming film Jackass 4 – one of which he says included a doctor dressed as a clown ‘paralysing’ him from the waist down for a stunt.

We shouldn’t have to tell you this, but also, we should – please do not attempt any of what Steve-O says at home. Or not at home. Don’t do it at all.

Anyway, in a YouTube clip in which he documented some of the upcoming scenes from the anticipated film, Steve-O shared the moment a giant needle was inserted into his back which sent his lower half numb. All in the name of comedy, apparently.

He told the camera: ‘I might have actually talked a doctor into dressing up as a clown so that he could put a four-inch needle into my spine and inject me with a drug that would paralyse me from the waist down while I was sprinting and before all kinds of terrible sh*t happened to me.’

That’s not all though.

Steve-O shared more plans, as he went on: ‘I’m getting ready to do a world record highest belly flop ever performed into pure piss. That’s why I have 190 gallons of piss in my front yard at home.’ 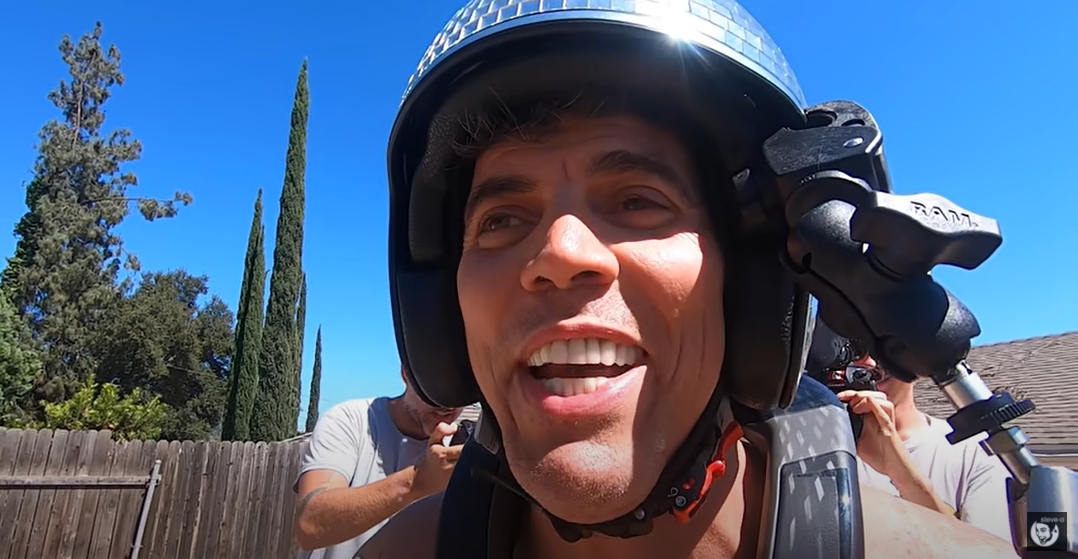 Of course he then shared a small clip of him surveying the stockpiles of urine in varying shades of yellow, marinating in the US sun.

The wince-inducing update from Steve-O comes not long after emergency services were called when he taped himself to a billboard in another hair-raising stunt.

The things people do for kicks never fails to astound.

Jackass 3 was released a decade ago, with the crew now in their 40s yet still keen to raise as much hell on camera as possible in their latest outing.

Clearly not learning from past experience, just days into filming for the new project Steve-O and Johnny Knoxville were hospitalised – with Jackass member Bam Margera revealing that production had paused due to the incident.

The stunt? The pair were attempting to jump onto a moving treadmill while carrying musical instruments. Of course.

Bam said: ‘Second day of filming Jackass and already Steve-O and Knoxville are hospitalised by jumping on a full-speed treadmill with band equipment.

Jackass 4 is scheduled for release in September.