Kylie Jenner revealed in a new interview that 3-year-old daughter Stormi has taken a liking to her mom’s shoe collection. And who could blame her?

According to Kylie Jenner, 3-year-old Stormi Webster just can’t keep her hands off her famous mom’s shoes! In the latest Vogue‘s “73 Questions” video series, Kylie, 24, took a stroll around her house while fielding wide-ranging questions about her life. As Kylie approached her mom Kris Jenner pushing Stormi on the swings, the questions began to center on the makeup mogul’s daughter, starting with if Stormi “has raided your purse closet yet.”

But as Kylie revealed, Stormi actually prefers the reality star’s footwear choices over anything. “She is more into my shoes,” Kylie revealed to the interviewee. Stormi really does live the life! 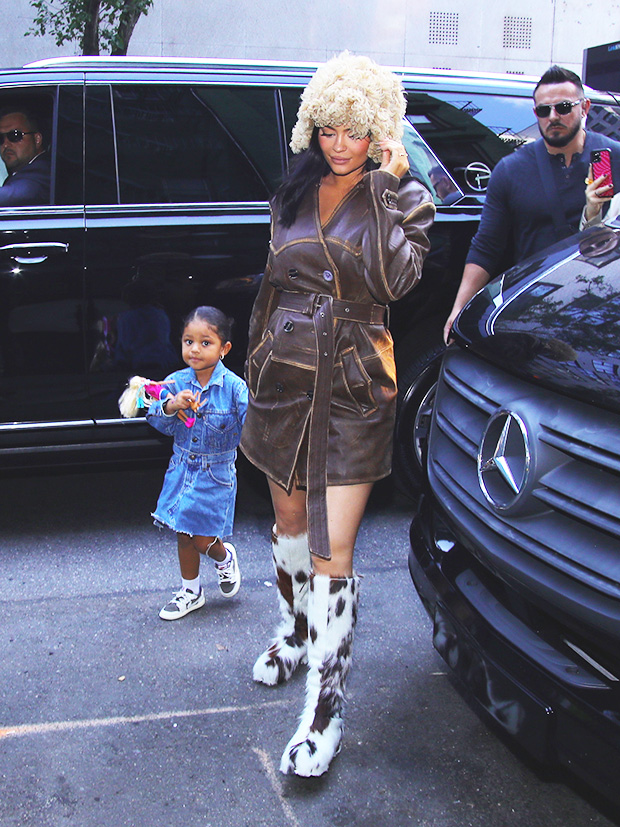 Of course, Kylie is known to be quite the fashionista from head to toe. In fact, the soon-to-be mom-of-two rocked quite the outfit while heading out to lunch with Stormi during New York Fashion Week on Sept. 10. Kylie, who is currently pregnant with her second child, rocked a brown leather-style jacket as a dress along with white, brown, and black furry knee-high boots, and a tan textured bucket hat, all from Acne Studios, for the outing. Stormi, meanwhile, looked just as fashionable in a long-sleeved denim dress, white socks, and white and gray sneakers.

Since confirming her second pregnancy, Kylie’s obviously had to switch up her wardrobe a bit. At one point during her time in the Big Apple earlier this month, Kylie stepped out wearing a long orange coat over a white crop top that showed off her bare baby bump. Most recently, the billionaire used a loosely fitted white button down shirt to cover her baby bump, as she went to the Houston Zoo with Stormi and her on-again/off-again partner, Travis Scott.

Kylie and Travis’ relationship status is unclear, at the moment. However, sources have indicated to HollywoodLife that the pair are in a good place and looking forward to expanding their family once more. “He’s crazy about Kylie and is so excited to have another baby,” a source close to Travis said.