While former President Donald Trump might not be in the White House anymore, he has certainly not slipped away quietly. Rumors continue to circulate that Trump is planning his return to politics with another potential presidential run in 2024. Only adding to these rumors, Trump has continued to raise money since his presidential term ended and his brood of children have also continued to serve as conversation topics and fodder for media outlets.

Clearly, the Trump family is fighting hard to stay in the public eye. Case in point, Trump continues to hold rallies, one where his fans actually booed him for promoting the Covid-19 vaccine. He’s not just holding rallies; he’s also actively doing interviews.

He spoke with Fox News’ Greg Gutfeld, and while talking, he fumed over late-night hosts Jimmy Fallon and Jimmy Kimmel. Trump was especially angry over the time Fallon messed up his hair. Remember that? Here’s the story. 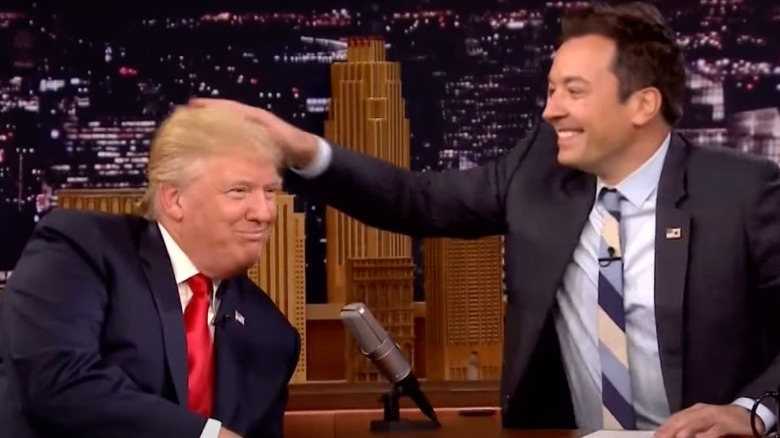 Donald Trump and Fox News’ Greg Gutfeld first discussed the term “fake news,” a phrase that Trump took credit for and one that Gutfeld called the most important term of the current generation, per Fox News. “It stuck, and you know how long it took to stick?” Trump asked, before answering, “About 24 hours.”

Trump and Gutfeld then turned the conversation to dish about late-night talk shows, like those hosted by Jimmy Fallon and Jimmy Kimmel, as they lamented that the shows have lost their touch. “They’ve replaced humor with anger and what’s called ‘clapter,'” Gutfeld added. “They want people to clap about their opinions and not their jokes.” Trump was particularly annoyed with Fallon, who rubbed his hair in 2016, during the election, according to Newsweek. The event was widely criticized as many felt like Fallon was throwing softballs and making light of such a contentious individual. Fallon apologized for the incident, and Gutfeld commented on the decline in ratings. “It’s never been the same,” Gutfeld claimed of “The Tonight Show Starring Jimmy Fallon.”

Trump added that his relationship with Kimmel changed since he got into politics, too. “The other one used to treat me — ABC — Jimmy Kimmel … I did his show many times before I was doing this,” Trump told Gutfeld. “He used to greet me on the sidewalk. He used to wait for me, nobody else. This was before I was a politician.”