The Sussexes delayed the walkabout because Meghan had to do hair & makeup? 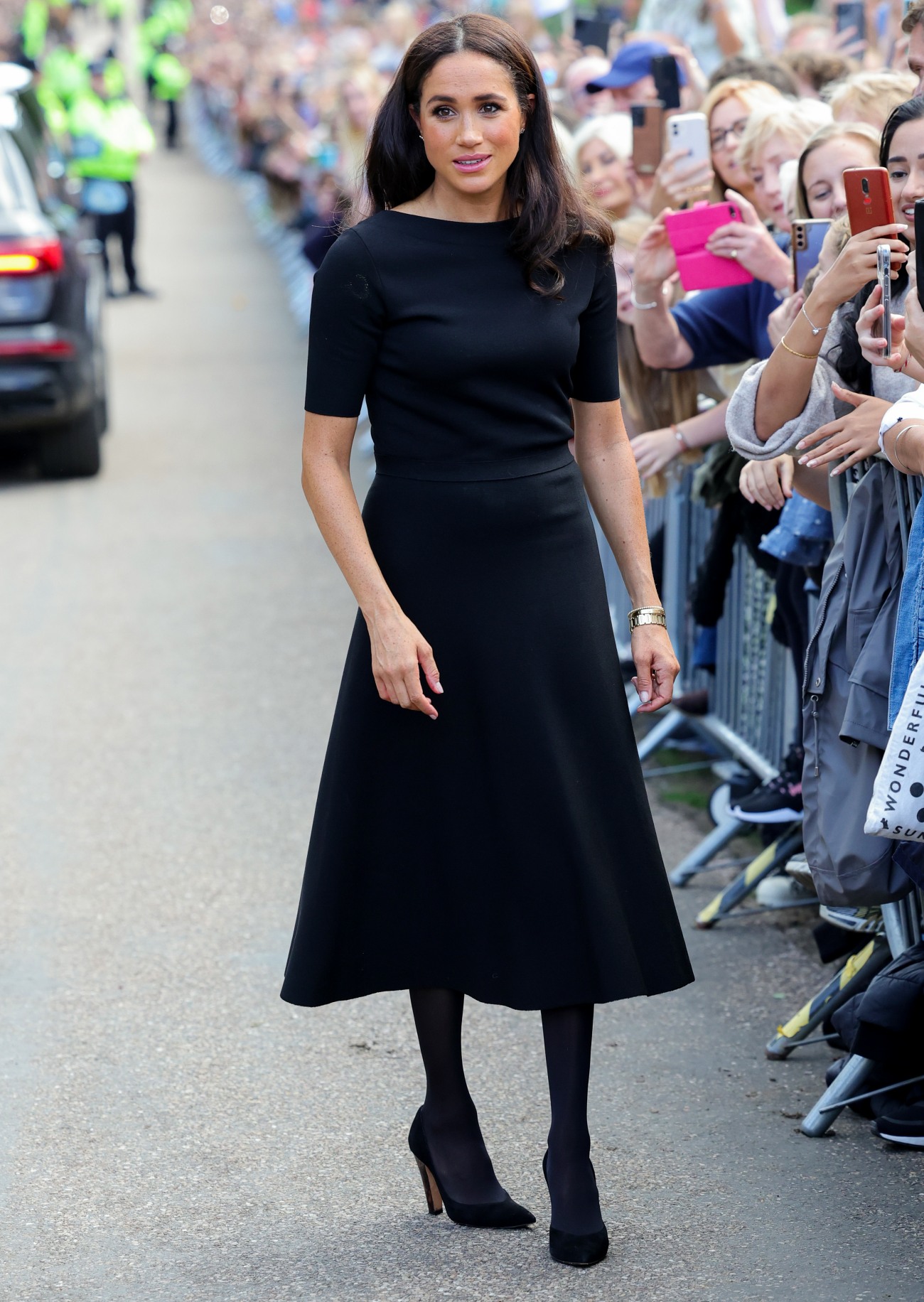 I thought the Duchess of Sussex looked lovely in the flower-walkabout outing in Windsor on Saturday. There were moments where she looked stressed out and downright haunted, but you know, her hair and makeup looked great. She wore cute pink lipstick and wore her hair down and wavy. You could tell that she was wearing makeup but it was done very naturally. I assumed that she did her hair and makeup herself. Now, Kate? Kate wore a lot of makeup and she plopped that bronde wiglet on the back of her head. I could feel Kate’s anger bubbling up because Meghan’s hair was longer than Kate’s Mourning Wig. So, why am I comparing and contrasting the two women’s styling? Because according to NBC’s Daisy McAndrew, the “45-minute delay” for the walkabout was because Meghan needed to do hair and makeup?

Prince Harry and Meghan Markle’s royal walkabout with Prince William and Kate was delayed by nearly an hour because the Sussexes had to get changed into formal mourning attire, a royal expert claimed on US TV today.

The Duke and Duchess of Sussex had to ‘quickly go and get changed’ to meet mourners with the Prince and Princess of Wales outside Windsor Castle on Saturday afternoon, according to NBC’s Daisy McAndrew.

The NBC News royal commentator told the network’s Today show that she believed Meghan needed to have her ‘hair and make-up’ done and that the walkabout had been ‘scheduled to be nearly an hour before they came’.

The new heir to the throne is understood to have invited his brother Harry in a text message to join them in meeting well-wishers outside the castle, which sources said William thought was an ‘important show of unity’.

Ms McAndrew said: ‘Interestingly, the reason that the walkabout was so late – it was scheduled to be nearly an hour before they actually came – was because of course Harry and Meghan had to go and get changed. They weren’t wearing the proper formal mourning attire, so they had to quickly go and get changed – I guess, do hair and makeup for Meghan. So that’s why they were late.’

The claim comes after the Daily Mail’s Richard Kay reported that the walkabout had originally been planned for 4.30pm but was delayed by 45 minutes as the brothers communicated with one another.

Well, by William’s own leaks to the Daily Mail, we know that he only texted Harry at the last minute, so of course Harry and Meghan would need to change and get ready. Plus, I feel pretty strongly that Harry was delayed because he was negotiating some sh-t with William, as in “we’ll make you look good but you can’t ignore/harass/smear Meghan.” Anyway, the Mail is just trying to make Meghan sound vain and vapid, as opposed to “oh right, of course she needed to change and apply some makeup quickly to look presentable for a completely unscheduled walkabout which aired live on multiple news channels.” This version also contradicts the dumbf–k theory that Harry and Meghan were going to do the walkabout by themselves only to be stopped by William.

Seriously though, I guess no one wants to talk about Kate’s Mourning Wiglet. 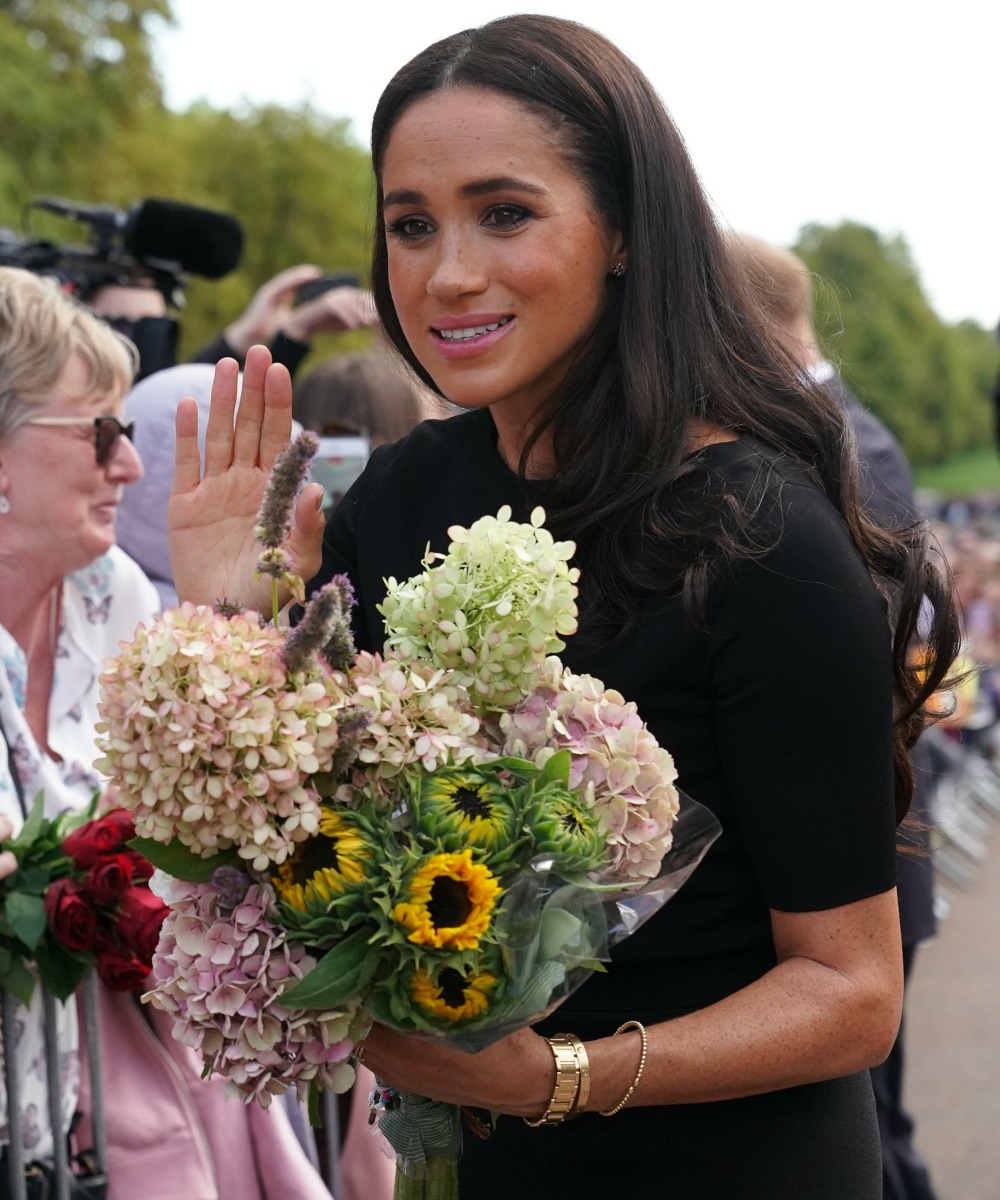 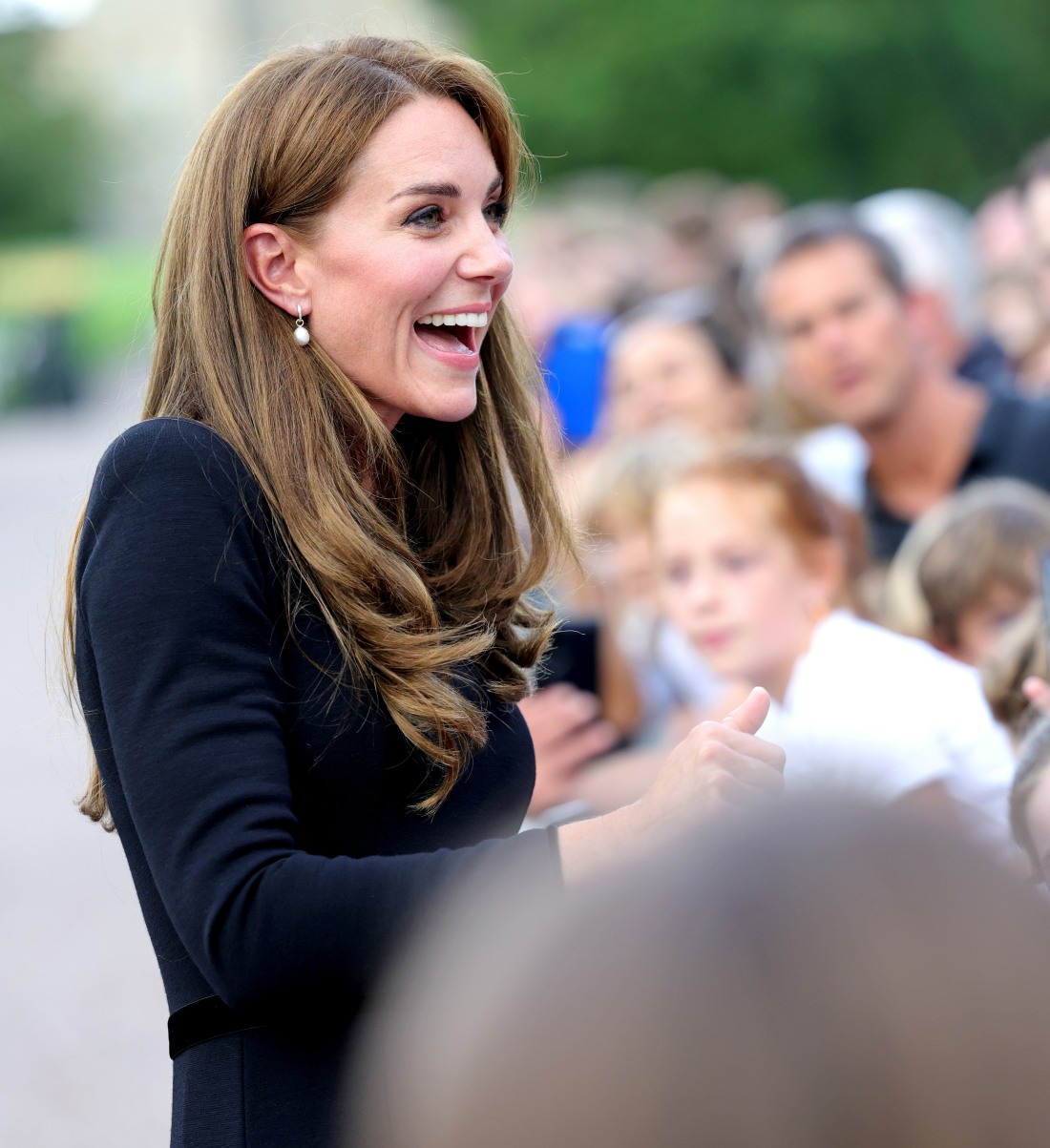 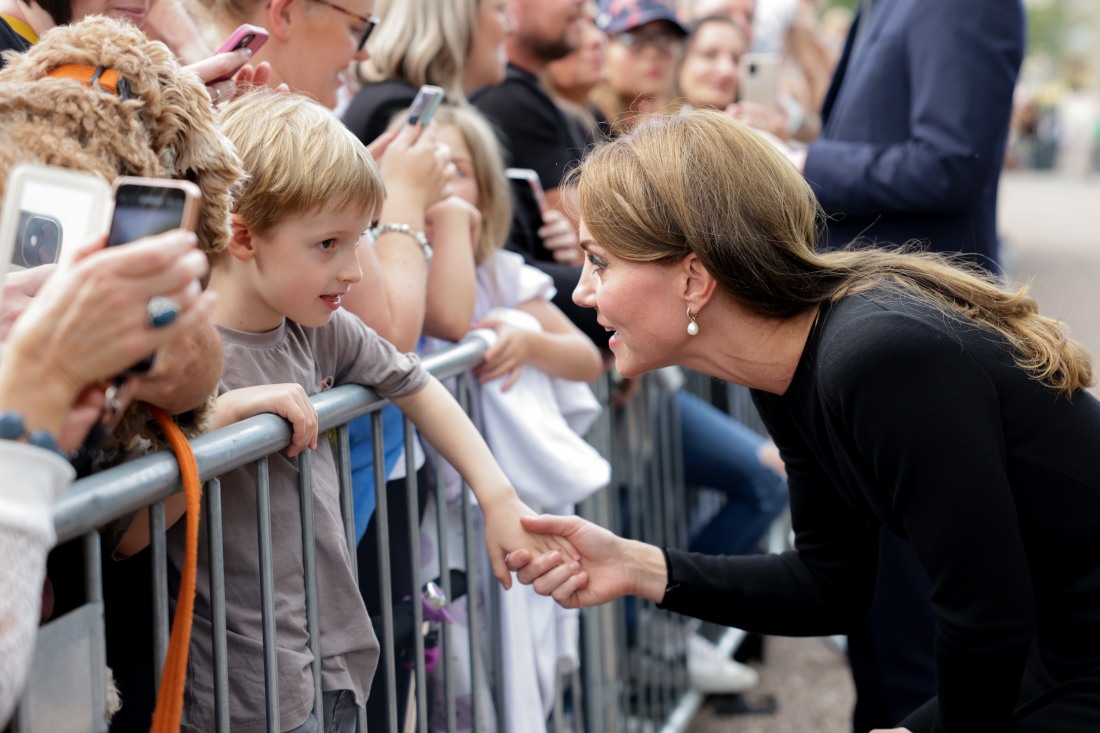 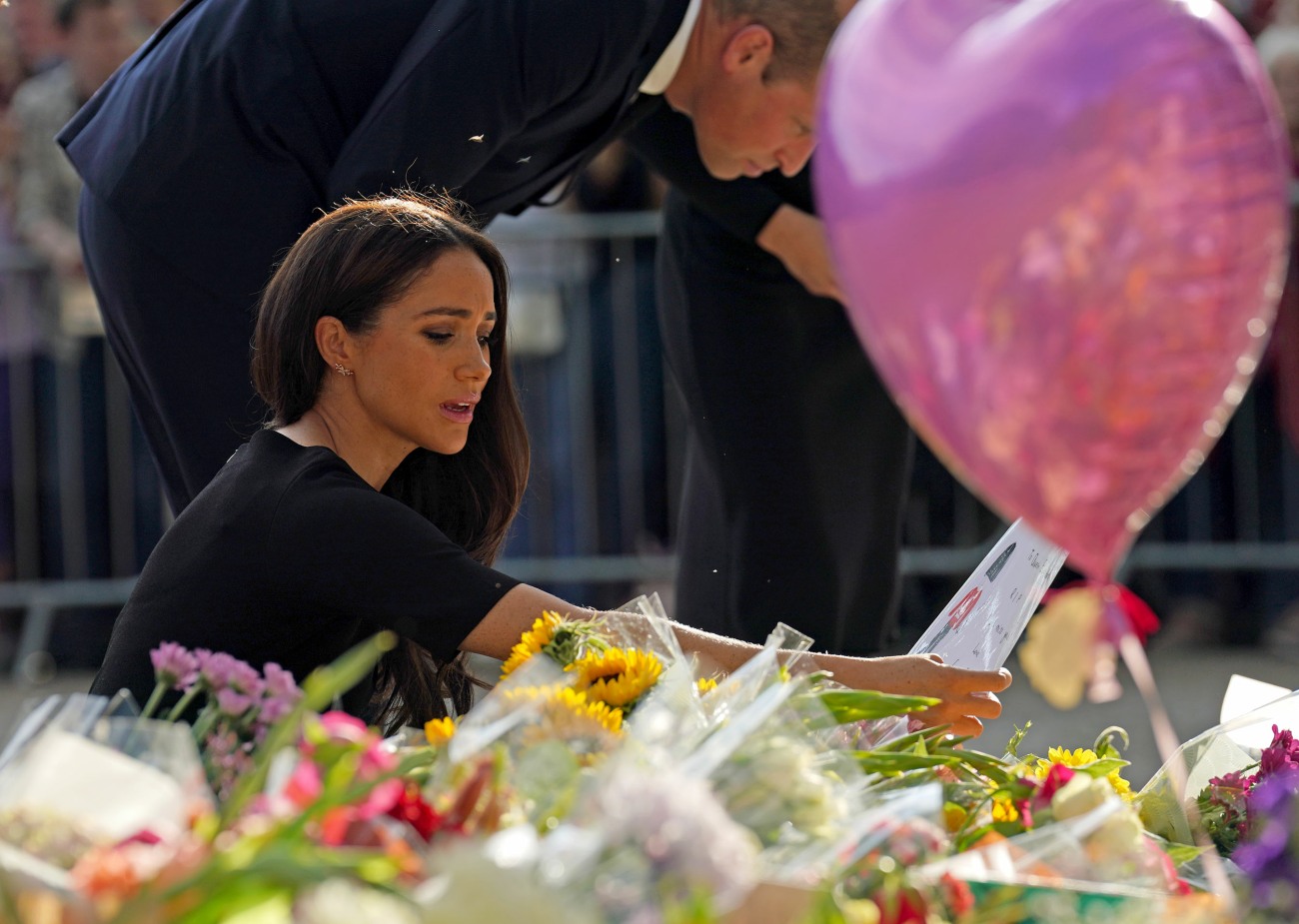