The Yankees Are Still on Top, but the Red Sox Are Surging

BOSTON — On Monday morning, the Yankees woke up with the biggest division lead in the American League, at eight and a half games, over the Tampa Bay Rays. The Yankees had just salvaged a 9-6 victory the night before in an otherwise lopsided four-game series against their surging rival, the Boston Red Sox, who trailed the Rays by half a game. But throughout much of the weekend, the difference between the Red Sox and Yankees didn’t feel quit so large.

So while the Yankees maintain a firm lead in victories and the division, in at least two important areas the differences between the teams was measured in fractions of runs.

“It’s just been cutthroat every game,” Yankees first baseman Luke Voit said. “I feel like every time we score, they score, and vice versa. It doesn’t matter who’s pitching, our best guy, their best guy, a long reliever, their best starter.”

He added later, “Just shows you why it’s the best rivalry in baseball because you never know what’s going to happen.”

While so much attention was paid to the Red Sox’ pitching struggles this season, it was the Yankees’ historically rough week on the mound that once again brought to the forefront a weakness that has concerned the team’s decision makers throughout the summer. The trade deadline, 4 p.m. on Wednesday, comes at an opportune time.

“We’ve entered this process at the deadline with pretty good feel of what we’d like to do, what we’re willing to pay for it and the built-in discipline of walking away if we don’t find the right matches under those circumstances,” Brian Cashman, the Yankees’ longtime general manager, said on Friday afternoon, before two more rough pitching performances by his team. “That’s regardless of what’s happened in the last week.”

In the coming week, the Red Sox will get a shot at their direct division competition, the Rays, while the Yankees will host the Arizona Diamondbacks. Eight more regular-season games remain between the Yankees and Red Sox, including four this weekend in the Bronx. The Rays began fading in June, and the recent loss of their ace Blake Snell, the 2018 A.L. Cy Young Award winner, to elbow surgery was a substantial blow. In recent weeks, it has felt like the division race could come down to the Yankees holding off the Red Sox instead.

“We know they’re a great club and capable of this kind of weekend when you’re not playing at your best,” Yankees Manager Aaron Boone said of the Red Sox after his team’s 9-5 loss on Saturday night. 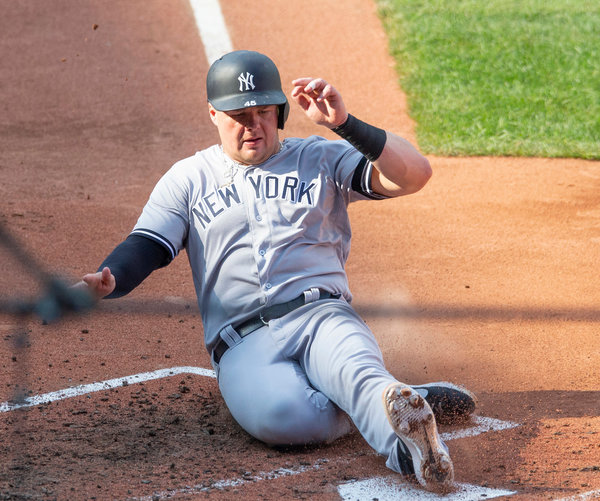 After Sunday’s victory, the Yankees improved to 8-4 against the Red Sox this season. Regardless, Yankees relief pitcher Zack Britton said that both teams were more evenly matched than might appear and that the difference in any given game has been the ability to play fundamentally sound baseball. At times, though, it has felt like the winner would be whichever high-scoring offense outlasts the other.

“If you want to be a World Series team, you’ve got to consistently do the little things,” Britton said. “And that’s what they did last year. That’s all facets of the game: not walking guys, getting ahead, making good pitches all the way through, moving guys over, playing good defense, not giving up extra outs. That’s the separator between us and them on a given night, and the team that consistently does that is going to be the team that season series-wise is the winner. But also with the talent, it’s the difference between winning the World Series or not.”

The Yankees hold the most decided edge over the Red Sox in the bullpen, even without injured four-time All-Star Dellin Betances, thanks to relief pitchers like Aroldis Chapman, Adam Ottavino, Tommy Kahnle and Britton. But the unit has sputtered more in recent weeks, perhaps a domino effect from the rotation’s struggles and constant inability to pitch deep into games. As a result, the Yankees have also been scouring the relief market, where there are more options available. They recognize the importance of a dominant bullpen come October and hope Betances will have returned from his shoulder and latissimus dorsi injuries by then.

While the postseason is still over two months away, the lack of an ace has been apparent for the Yankees. Luis Severino, the team’s best starting pitcher, hasn’t thrown a pitch all season because of a rotator cuff injury and a puzzling lat strain. (He has recovered, recently resumed throwing and is racing against the calendar to build up his workload to return as a starting pitcher. If not, he might be an option in the bullpen.)

Domingo German has pitched like the Yankees’ best option for an ace, particularly on Sunday. He allowed three runs and struck out nine batters over five and one-third innings to improve to 13-2 on the season. He was the first Yankees starting pitcher since July 20 to complete five innings and the only one with an adjusted E.R.A. above league average. The Red Sox have four such starting pitchers.

“I felt like it was my responsibility to go out there and put a stop” to the losses, German said.

The Yankees’ biggest off-season acquisition for the rotation, James Paxton, has the talent to pitch like an ace but has struggled to the tune of a 4.72 E.R.A. this season and dealt with a knee injury. Masahiro Tanaka (4.79 E.R.A.) and J.A. Happ (5.23 E.R.A.) have remained healthy but haven’t been consistent on the mound. The Yankees knew C. C. Sabathia (4.78 E.R.A.) would need to manage his chronically balky right knee and, over the weekend, it landed him on the injured list for the third time this season.

The lack of a front-line starting pitcher has very likely guided the Yankees’ interest in San Francisco’s Madison Bumgarner (3.66 E.R.A.), one of the greatest postseason pitchers in history, and Cleveland’s Trevor Bauer (3.79 E.R.A.), who entered Monday with the most innings in the major leagues but questions about his behavior. But both of those teams are suddenly in the thick of the playoff race after recent surges, which has complicated the Yankees’ search for rotation help.

The Red Sox, on the other hand, have two standout starting pitchers capable of leading the rotation in a push for the playoffs. David Price, a 2018 World Series hero, leads the Red Sox rotation with a 3.66 E.R.A. Despite his six-run outing against the Yankees on Sunday, Sale (4.26 E.R.A.) rebounded from a rough start to the season and has been one of the most talented pitchers in baseball for years. The team’s over all surge has coincided with improved pitching from the rotation. The recent trade for starting pitcher Andrew Cashner may provide enough of a stabilizing force to allow their powerful offense to carry the team.

When they meet again, the Yankees and Red Sox could be slightly different teams. The race, however, is still on.