These Knicks Do Not Belong in Today’s N.B.A.

James L. Dolan might have been a perfectly fine custodian of a professional basketball team had his father given him 50 years ago. But not in the 21st Century.

Before there was such a thing as free agency, back when the privilege of ownership essentially included the players along with the franchise, Dolan’s imperious ways would not have cost him transcendent talent. His self-defeating stubbornness would not have ruined the curb appeal of Madison Square Garden, the self-proclaimed World’s Most Famous Arena.

If he didn’t have to compete for the likes of Kyrie Irving and Kevin Durant, Dolan might have been a contender, instead of the steward of a team that just lost a franchise-worst 65 of 82 games for the second time in five seasons and has won just a single playoff series since 2000. Which happens to be about when the Knicks began to play by the byzantine Dolan house rules.

Oh and @nyknicks fans I didn’t forget about y’all either ??? pic.twitter.com/h6f0Xy1hr3

On the subject of past and present, the evolution of the game, I stumbled upon a fascinating article while researching an archival book project on the N.B.A. for The New York Times last year — written for the newspaper in April 1977 by that famed Boston-based journalist, Arnold (Red) Auerbach.

The headline read: “Pride and Integrity: Pro Basketball Has Changed.” In the piece, Auerbach bemoaned the federal court rulings heralding the earliest form of free agency and the gradual shifting of bargaining power to where it rightfully belonged. “By and large, we’re seeing an erosion of basic values — things like pride and integrity and dedication,” Auerbach warned. “We’ve created a system that works against motivation, desire and discipline.”

To the contrary, the N.B.A. is a global phenomenon now precisely because its stars became max-leveraged commodities, soaring to once-unfathomable commercial heights in the age of techno-connectivity. The league’s 2019 free-agent signing season, newly timed to kick off Sunday at 6 p.m. Eastern time, was a Super Bowl of player empowerment and stimulating competitive realignment, commencing with the bombshell that the Nets — and not the Knicks — would be landing Irving and Durant.

A tactical savant and patriarch of the Celtics’ dynasty, Auerbach was no industry visionary. Pride? Integrity? While tanking engineered or authorized by inept owners such as Dolan continues to plague the league, a gimpy Durant laid it all on the line in Game 5 of the recent finals for the Golden State Warriors — a team he apparently had every intention of leaving — and suffered a devastating Achilles’ tendon injury on the threshold of free agency.

When the Knicks traded Kristaps Porzingis to Dallas this past winter and opened up enough salary cap space to land two so-called max-salary players, it was widely anticipated that Irving and Durant were coming to fill the void. Maybe that was the original plan. Maybe Durant’s injury — likely to keep him out for all of next season — and Irving’s boyhood predilection for the Nets when they played in New Jersey altered their thinking. Most likely, it was a stark realization that the Nets’ architect, Sean Marks, had already constructed a solid foundation while the Knicks had succeeded only in tearing apart yet another blueprint: the one to build a team around Porzingis, the uniquely skilled giant. 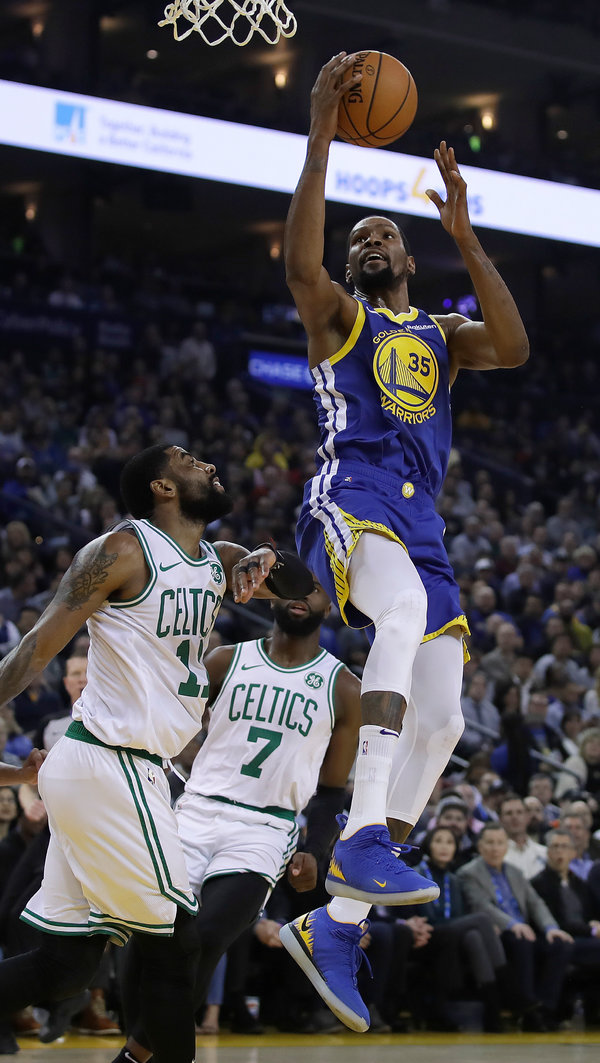 But not just that.

People often wonder why Dolan, in his chairmanship of the Garden, has had measureable success with hockey’s Rangers while faring so miserably with the Knicks. The answer seems clear: The N.B.A.’s difference makers, in addition to being corporate powerhouses, are also eminent cultural celebrities. They have a grand social platform and have been increasingly eager to use it.

Contrarily repellent is Dolan’s utter intolerance of any departure from his less-than-enlightened company line. It goes much deeper than profanely arguing with a fan, or punishing journalists — most recently the Daily News’ Stefan Bondy —whose reporting Dolan objects to. Name a Knicks executive, coach or player during the Dolan years known for his outspokenness. Try to imagine LeBron James’s or Gregg Popovich’s political diatribes at the Garden.

Players like Durant and Irving did not grow up in a bubble. They know that to be a Garden employee who crosses Dolan is to be censored, or crushed. When Anucha Browne Sanders said in 2007 that she had been sexually harassed in her position as a Knicks marketing executive, Dolan afforded her not a shred of sympathy or respect. (She won a civil judgment in connection with the accusation.) The origin of Charles Oakley’s beef with Dolan — which led to Oakley’s being cuffed and carried out of the Garden, under arrest — was harmless criticism that rang true.

The great contemporary players all say they love performing under the Garden’s famed dropped ceiling. What they apparently mean is in a visiting uniform. No doubt Porzingis can’t wait to suit up there for the first time since he tore his anterior cruciate ligament in February 2018.

Upon trading him, the Knicks couldn’t be content with the salaries they cleared and the draft picks acquired. They had to disparage Porzingis as an agitator, a maverick, as if the constant organizational turmoil throughout his time in New York had been nothing to be unhappy about.

The current front office folks had a year and a half after Phil Jackson’s exit to appease Porzingis, and failed. Dolan went on the radio after the trade and bragged: “We hear from people all the time players, representatives who want to come. … I can tell from what we’ve heard, I think we’re going to have a very successful off-season when it comes to free agents.”

Then came the hard part, the actual selling season. After all the hope and hype, the Knicks were suddenly filling the much-celebrated cap space with a trio of consolation prize forwards —Julius Randle, Bobby Portis and Taj Gibson — on two-year deals that would allow them to begin selling yet another next free-agent fantasy, Giannis Antetokounmpo in 2021. They were surreptitiously letting it be known — after the fact, naturally —that they never really wanted Durant at the full max salary price.

It is, of course, possible that the Nets, the object of free-agent affection for the first time ever, have taken on excessive risk, given the extent of Durant’s injury and Irving’s trademark moodiness.

The Knicks’ default position — developing their young players — may someday even be considered a blessing. But that is a narrative for another time. Today’s is the persistence of a recurring one. Dolan, an owner from the very old school of player subservience, has once again flunked modern N.B.A. civics.