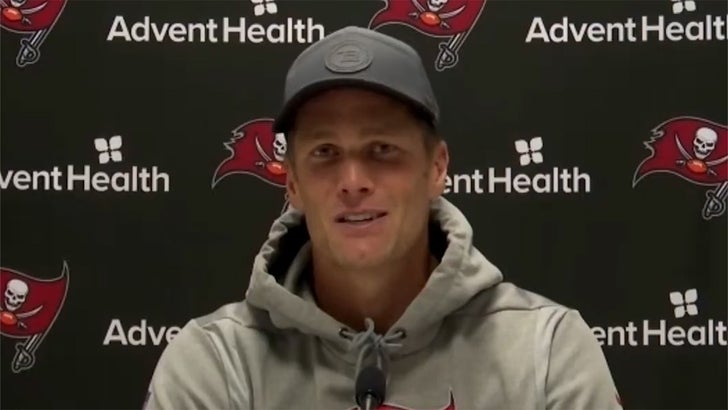 Tom Brady is new to Florida … so how’d the G.O.A.T. handle his first huge storm?! Here’s a hint … he didn’t secure his jet skis, and they floated hundreds of yards away.

Brady met with the media Thursday afternoon … and he was asked how he dealt with Tropical Storm Eta — which slammed into Tampa early this morning — wreaking havoc.

“The hurricane, that was a trip last night for me,” Brady said.

“I had a dock and it broke, floated away. I had these jet skis on, I saw those things sitting in the middle of the bay and I was going, ‘Wow, that’s pretty surreal’ and I was kinda laughing. ‘Well, you’ll get the jet skis back.'”

“A lot of people are dealing with a lot worst than that, but just waking up and seeing kinda what happened to the yard, it got pretty messed up. Be really nervous if a big one hit!”

Of course, Eta caused flooding and lots of property damage … and was even responsible for 1 death, according to reports.

Tom — who was raised in California and spent his entire professional career in New England — says he is NOT looking forward to the next one … but has learned a valuable lesson on storm preparation.

“It happened pretty quick, I thought you had time to prepare for these things but apparently you don’t, They’re just kinda on you and then you just gotta deal with it so we pushed the schedule back today.”

“Fortunate everyone made it safe and sound. Good lesson learned for someone who’s been in the northeast for a long time.”

So, did Brady get his jet skis back?

“They got fixed. We dragged ’em back. They were about 300 yards away at someone else’s house and I got a bunch of messages from people that were like, ‘Hey man, are your jet skis…?’ Ya know, they floated down and found their way into someone else’s dock. They got lodged, so I was very lucky.”