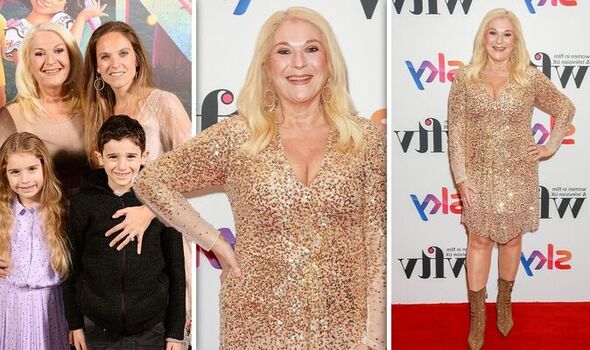 Vanessa Feltz posed up a storm this afternoon as she attended the Women in Film & Television Awards, held at the Hilton Park Lane.

Vanessa Feltz, 60, posed up a storm this afternoon as she took to the red carpet at the Women in Film & Television Awards.

She styled her blonde tresses in a waved look while showing off her flawless complexion with her bronzed makeup look.

Express.co.uk asked Vanessa at the event how her daughter was doing after she opened up in recent weeks that she was rushed to the hospital after falling “terribly unwell”.

She said: “Thank god, she is getting better thank you. Very very slowly.

“She still can’t eat, three weeks not being able to eat at all! But yes it’s not a quick recovery.”

Vanessa Feltz showed off her ageless appearance as she sported a busty sequin gold number, paired with glitzy brown boots.

Vanessa Feltz went for a bronzed makeup look for the event, showing off her ageless complexion while styling her signature blonde tresses in a waved look.

Vanessa Feltz issued an update on her “terribly unwell” daughter

Vanessa Feltz opened up last month about her daughter’s flu which left her in the hospital and unable to eat. In an update today to Express.co.uk, Vanessa said: “Thank god, she is getting better thank you, very very slowly. She still can’t eat, three weeks not being able to eat at all! But yes it’s not a quick recovery.”

Vanessa Feltz’s daughter was rushed to the hospital last month

Vanessa Feltz took to Instagram to share a short video explaining what was happening to her daughter Allegra. She said: “My daughter is in hospital on a drip terribly unwell. She has the ‘flu’. She has been vaccinated. If she hadn’t it doesn’t bear thinking of. Please get the jab. Speaking from my daughter’s hospital bed. She has been on a drip since Thursday.”

Vanessa Feltz wrote in her Express.co.uk column: “The consultant told us she had tested positive for ‘Type A’ flu. The A strain is the one that kills 20,000 people in the UK every year. He told us his ICU is full of patients struggling with flu. He said the hospital had no choice but to open a ward, especially for flu sufferers. It is a truly horrible illness, more serious than Covid. If you have it you are so wretched you feel you are dying – and in some cases, you may be correct.”

Vanessa Felz continued in her Express.co.uk column: “My daughter is now at home. We can’t thank the wonderful nurses and doctors enough for their tender care. She is recovering excruciatingly slowly. She still can’t eat or stand or work. She is weak, thin and utterly depleted. But she is alive and gaining tiny increments of energy every day.”