Cicely Tyson worked until her final days. The legendary actress died on Thursday at the age of 96. Just one day before her death, she did her final interview on Live With Kelly and Ryan, which was pre-taped on Wednesday, to talk about her extraordinary career and new memoir, Just As I Am.

Kelly Ripa fronted the Friday piece with a new clip sharing news of Tyson’s death and expressing her sorrow.

“To say Cicely Tyson was an American legend would be too great an understatement. We were honored to speak with her on Wednesday when we recorded this show and devastated to learn of her passing yesterday,” Ripa explained. “She was a trailblazer who broke barriers for Black actresses and women everywhere. Cicely was a portrait in courage, dignity, and grace. We feel very fortunate to share with you her last interview.”

Tyson kicked off her interview by sharing the story of how a stranger made a prediction about her when she was a baby, telling her mother that she would make them “very proud.”

“My mother was pushing me in a baby carriage and this woman stopped her and started playing with me and turned to my mother and said take care of this child, she has a sixth sense,” Tyson recalled. “She’s going to make you very proud one day and she will take care of you in your old age.”

During the segment, Ryan Seacrest also asked her how she kept in such great health after turning 96 last month.

“Well, one thing I did was I never smoked, and I never drank and I didn’t do drugs,” she replied. “When Martin Luther King was assassinated, I was so stunned by that that I became a vegetarian and I’ve been that most of my life.”

The hosts and Tyson also touched on her Oscar-nominated role in Sounder.

“I never thought that I would be nominated for an Oscar, never, but I used to view the event every year and one night I watched it and I said, ‘I’m going to sit in that front row one day,'” she shared. “And certainly, ended up doing that for the role of Rebecca.”

Tyson remembered the casting directors telling her that she wasn’t right for the role, but she proved that the part “belonged” to her.

“They said, ‘Well, you’re too young, you’re too pretty, you’re too sexy, you’re too that.’ And I said, ‘But I’m an actress,’ but they still went off and searched for another actress to play the role of Rebecca and offered it to another actress by the way,” she noted. “But in negotiations, it fell down, they didn’t offer her enough money and she passed. In the meantime, however, I started working on the role of Rebecca, not the schoolteacher, and then finally one day, my manager, Larry, came to me and said, ‘Well, someone else got the role but she turned it down and I said, ‘Because it doesn’t belong to her, it belongs to me.'”

In an Instagram Story sharing the interview on Friday, Seacrest wrote in part, “It was an honor to speak with the extraordinary Cicely Tyson on the show earlier this week…May her legacy and unwavering commitment to excellence continue to inspire others to blaze their own trails.” 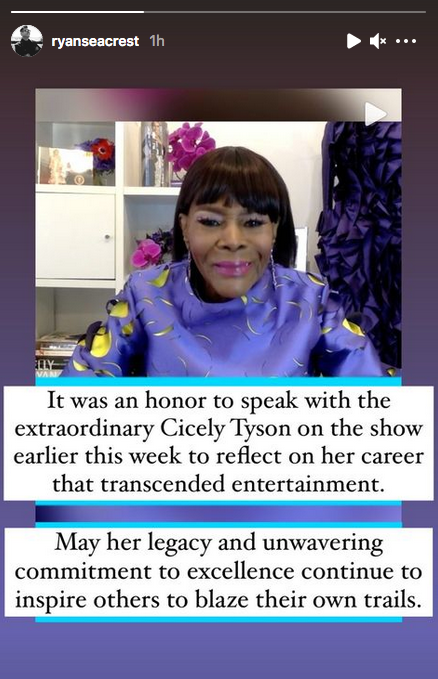 Ripa also posted a number of tributes to Tyson on her Instagram Story, calling her American royalty and “the epitome of greatness.” 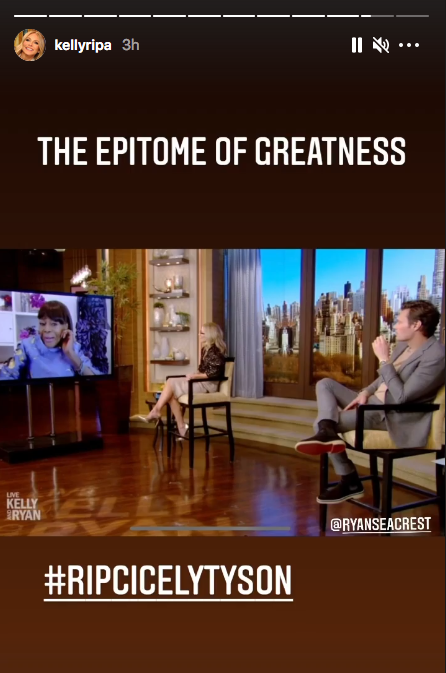 On Thursday, Tyson’s family, via her manager, Larry Thompson, confirmed her death in a statement to ET: “With heavy heart, the family of Miss Cicely Tyson announces her peaceful transition this afternoon. At this time, please allow the family their privacy.  A formal statement and details will follow.”

Many celebrities and political figures like Barack and Michelle Obama have paid tribute to Tyson. Watch the video in the player above for more on her life and legacy.