David Schwimmer and Jennifer Aniston shocked the world on May 27 during HBO’s “Friends: Reunion” when they revealed they had a mutual crush on each other during the early seasons of the hit sitcom. As it turns out, their on-screen romance trickled over into real life and the pair actually began to develop real feelings. Unfortunately, unlike Rachel and Ross’ iconic romance, nothing ever happened between Schwimmer and Aniston.

“The first season, I had a major crush on Jen,” Schwimmer admitted during the special. Aniston agreed. “I remember saying one time to David, ‘It’s gonna be such a bummer if the first time you and I actually kiss is going to be on national television,'” the “Morning Show” star explained (via Us Weekly). “Sure enough, the first time we kissed was in that coffee shop. We just channeled all of our adoration and love for each other into Ross and Rachel.”

One of the reasons they never got together was bad timing. “I think at some point we were both crushing hard on each other, but it was like two ships passing because one of us was always in a relationship, and we never crossed that boundary,” Schwimmer added. “We respected that.” At the time, the actor was dating a famous singer and she recently shared her opinion about her ex’s crush on his co-star. Scroll ahead to read what she had to say about Schwimmer and Aniston’s relationship and how she felt when she visited him on the set of “Friends.”

Natalie Imbruglia explained what the vibe was like on set 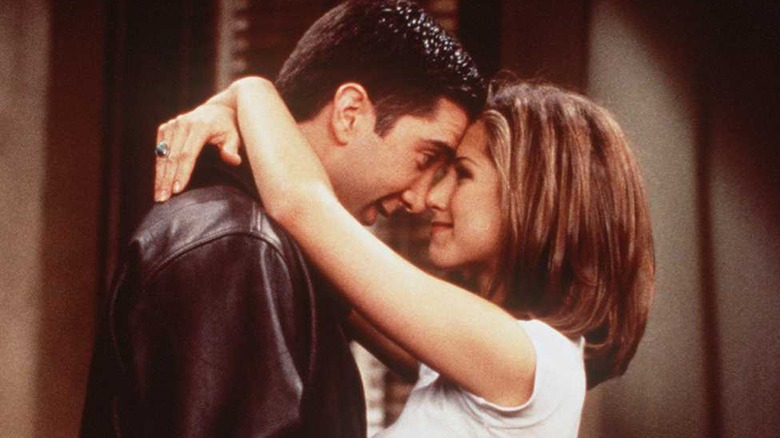 David Schwimmer had a celebrity girlfriend in the ’90s at the start of his “Friends” days: Natalie Imbruglia. Though it’s not perfectly clear if Schwimmer’s crush on Jennifer Aniston overlapped with their relationship, the “Torn” singer is perfectly OK with the fact that her then-boyfriend had feelings for another woman.

During an appearance on the “Kyle and Jackie O Show” June 24, Imbruglia was asked about the actors’ recent admission and joked about the possible “crossover” between both romances. Despite not remembering when she dated the star (The Independent claims it was in 1996 during “Friends” Season 2), Imbruglia does recall visiting Schwimmer on set at the time. “I do remember being on the set and I remember everybody being lovely and really, really nice,” she explained. “I wasn’t paying attention to whether they were giving each other ‘little looks’ over my shoulder. I don’t know if that was happening.” She added, “I’m okay with whatever happened back then. It was a long time ago.”