What Is Weverse? BTS & TXT’s New Official Fan Community App Is A Game-Changer

International ARMY and TXTers, Big Hit Entertainment just announced a brand new app that’s going to change the way you fangirl alongside your fellow fans around the world in a major way! Most artists in K-Pop use a Korean forum called fancafe to communicate and share exclusive content with fans. But fancafe is run by a third-party web portal called DAUM that is not particularly easy for international fans to access or use (which is understandable, considering DAUM is a Korean company and has no obligation to cater to international fans). But considering BTS’ unprecedented international success, it’s no wonder Big Hit took to Twitter on June 30 to announce BTS’ new official fan community on an app called Weverse that’s more geared towards an international fanbase. So, what is Weverse? Let me explain. Enter TXT, Big Hit’s latest boy band launched in March 2019. It surprised BTS fans that on Feb. 1, before TXT had even debuted, Big Hit announced that their official fan community was launching via a non-DAUM-affiliated website called TXTUniverse.com. ARMYs were curious (read: really, really disappointed) why, despite ARMYs begging for a more international-fan-friendly environment for ARMYs for years, Big Hit would launch one for TXT before BTS. But it seems, based on the launch of Weverse, that rolling out TXT’s international fan community and BTS’ ARMYpedia first was all part of a master plan.

See, if you look under the hood of TXTUniverse and ARMYpedia, they were both developed by BeNX, Big Hit’s online application development subsidiary focused on creating services to maximize online and offline experiences for fans around the globe. They also developed Weply, BTS and TXT’s new official merch store app.

It’s worth noting that, since BeNX launched the Weverse app, TXTUniverse.com has closed down, directing all TXT fans to download the Weverse app. This seems to imply that BeNX (aka, Big Hit) was testing out their new fan community technology on a smaller fandom and smaller pocket of BTS’ fans before they officially launched the app for BTS’ massive international fanbase (which was smart, considering BTS’ Weverse portal already has over 500,000 registered users).

So, now that you have all the background info on Weverse, here’s what you can do on the app. The official Weverse application description says the app allows fans to connect with other fans around the world, and much like fancafe, it allows you to enjoy exclusive content you can’t see anywhere else handpicked for Weverse members. It also has an Instagram-Story-esque feature called "Artist Moments" where artists share "funny, touching, or inspirational" posts with fans that expire after 24 hours. 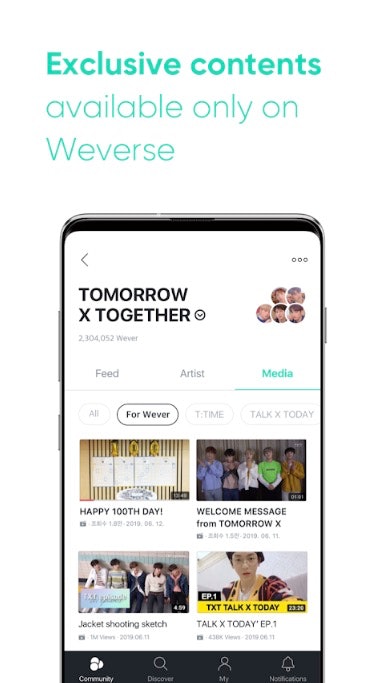 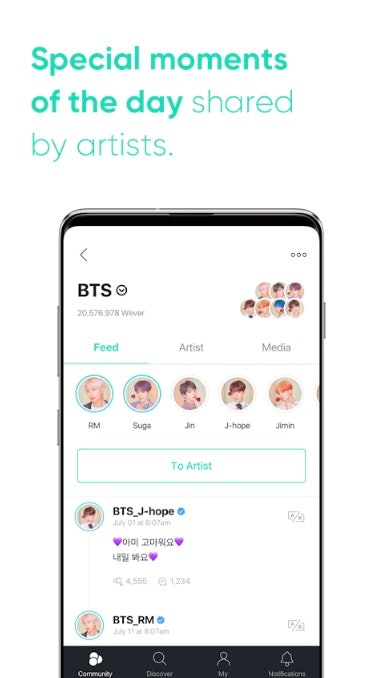 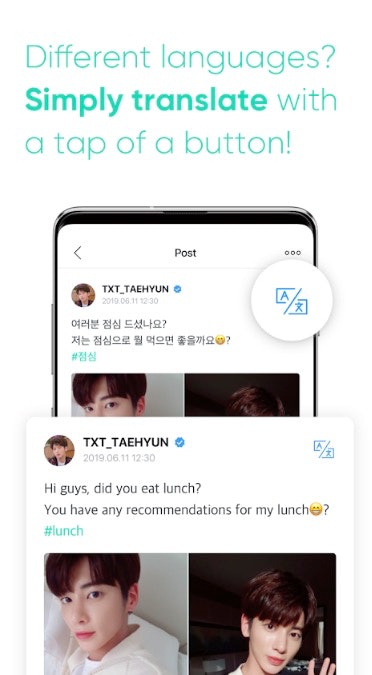 Right now, the app is available in English, Korean, and Japanese.

Weverse’s app also teases the addition of communities for artists other than BTS and TXT coming soon. It’s unclear at this point if the artists will be new Big Hit artists or artists outside of Big Hit, but the possibilities are endless.

It’s also unclear if BTS’ fancafe will continue to exist on DAUM, or if it will close down once Weverse hits its stride. Elite Daily reached out to BeNX for comment on the future of BTS’ fancafe, but did not hear back by the time of publication. For now, though, their fancafe appears to be up and running as usual.

But, international ARMY can log in to Weverse now to enjoy all it has to offer. Jimin, Suga, Jungkook, Jin, J-Hope, and RM have all already posted in the app, so there’s so much to enjoy already! HAVE FUN!