Whoopi Goldberg, Joy Behar and the rest of ‘The View’ ladies shared some love to Meghan McCain when the conservative co-host announced she was leaving the show. Here’s what they had to say.

It’s official: Meghan McCain is leaving The View. The 36-year-old outspoken conservative announced on the July 1 episode that she will be leaving the show at the end of the month. “This was not an easy decision, it took a lot of thought and counsel and prayer and talking to my close family and friends,” Meghan said. She also explained that she did not want to give up her “incredible life” with husband Ben Domenech and their 9-month-old daughter Liberty Sage in Washington D.C., where she moved to at the onset of the COVID pandemic last year. Following her announcement, Meghan’s co-hosts Whoopi Goldberg, Joy Behar, Sunny Hostin and Sara Haines all shared kind words to John McCain‘s daughter and wished her well in future endeavors.

“It has been quite wonderful to sit across from you,” said Whoopi, 65, who went on to applaud Meghan’s late father for convincing her to join the show in 2017. “Your dad was very smart, he wanted you to be here with us because he thought we could help toughen you up for what was coming which was this wonderful baby that you were going to have and his departure.” Sunny, 52, recalled how John “told me to take it easy on Meghan and that I would learn to love her and understand her.” The lawyer added: “Meghan and I probably talk everyday after the show. We text after the show. I’ll miss those conversations. You have a really important point of view and it’s been wonderful.” 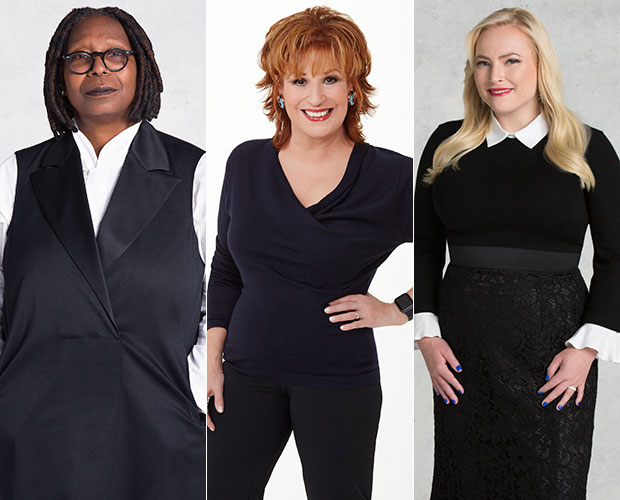 Sara, 43, shared some love to Meghan as well. “It has been an honor to sit here with you. You are a tough b**ch,” she said with a laugh. After Meghan jokingly told Joy, “I will miss you too,” the 78-year-old comedian said that while she and Meghan often sparred, they were also very similar. “We have in common here that we are on a show that we stick our necks out. We take the blowback and we stick by our points of view,” Joy said, adding to Meghan, “I really appreciated that you were a formidable opponent and you spoke your mind. You are no snowflake missy.”

Meghan said goodbye to her co-hosts on a very positive note. She said being on The View was “one of the hands down greatest and most exhilarating, wonderful privileges of my entire life.” She added to her co-hosts, “It is a privilege to work alongside such strong, brilliant, intelligent, incredible broadcasters like the four of you. You are the most talented women on all of television hands down.” To close out her goodbyes, she joked to the other ladies, “I will still be here another month, so if you guys want to fight some more, we got four more weeks.”

Meghan joined The View in October 2017. And as only conservative Republican on the panel, Meghan often sparred with her liberal co-hosts. Most recently, she and Whoopi got into it over President Joe Biden‘s interaction with a reporter. The disagreement got so bad that Whoopi even had to cut the conversation short and roll to commercial. In May, Meghan and her co-hosts were reportedly scolded by execs at ABC for how personal their on-air brawls had gotten. The meeting reportedly happened after one of Meghan’s many fights with Joy, with execs allegedly telling the women to tone it down because viewers were finding the show “toxic.” But as fans know, the fighting never really toned down.

During her four-year run on the show, Meghan took two leave of absences. Her first was from August 2018 to October 2018 after the death of her father, a former Arizona senator and 2008 Republican presidential nominee. She also took a three-month maternity leave at the end of last year after giving birth to daughter Liberty Sage on Sept. 28, 2020.