10 Classical Concerts to Stream in January

As the live performing arts still reel from the coronavirus pandemic, here are 10 highlights from the flood of online music content coming in January. (Times listed are Eastern.)

This winter, Katharine Merhling was scheduled to reprise her Eliza Doolittle in “My Fair Lady” at the Komische Oper in Berlin. The pandemic got in the way, but the company’s devoted audience need not spend the season without this singer’s gifts. This performance (first streamed live late in December) offers a fresh look at Kurt Weill, focusing on that composer’s years in Paris and New York. Devotees know many of these songs. But Ms. Mehrling’s energy — aided by Barrie Kosky, the Komische Oper’s artistic director, on piano — gives a saucy charge to a medley from the rarely staged “Lady in the Dark.” SETH COLTER WALLS

In case you missed it in August, this 1991 Metropolitan Opera performance of Verdi’s dark tale of love, betrayal, friendship and regicide returns to the company’s series of nightly streams from its archives. “Ballo” is part of a week centered on Luciano Pavarotti, Met star supreme, but is also a showcase for the passionate artistry of the soprano Aprile Millo, whose career burned bright in the 1980s and ’90s, a throwback to divas of yore. James Levine conducts a cast that also includes Leo Nucci, Florence Quivar and Harolyn Blackwell. ZACHARY WOOLFE 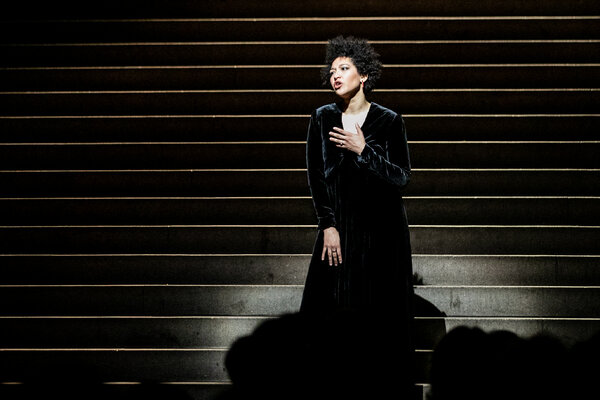 Kurt Weill isn’t just coming from the Komische Oper. One of our most luminous singers has four Weill numbers of her own to offer in a recital for Cal Performances that swings, in characteristic Bullock style, from the classical canon to contemporary work by way of golden age musical theater. Pieces by William Grant Still and Margaret Bonds are at the core of a program that also includes songs by Wolf and Schumann (selections from “Dichterliebe”), a set from “The Sound of Music,” and material from John Adams’s recent opera “Girls of the Golden West,” composed with Ms. Bullock in mind. Laura Poe is the pianist. ZACHARY WOOLFE

This Canadian pianist, who specializes in contemporary music, will perform the premiere of her Seven Studies for Augmented Piano. This is a series of works she created for a Yamaha Disklavier — an acoustic piano with a computer interface, coupled with software that allows her “to augment and extend the sonic range of the piano,” as she writes in a program note. The program, part of the 21C Music Festival presented by the Royal Conservatory of Music in Toronto, includes a short video exploring Ms. Egoyan’s creative process. ANTHONY TOMMASINI

Artists from the Wild Up collective, including its conductor and artistic director, Christopher Rountree, are familiar to Los Angeles audiences. But for the group’s coming monthlong project, “Darkness Sounding,” listeners around the world are invited. Some concerts will be available as livestreams, then archived, through Wild Up’s Patreon page. At five dollars for the month, you can access shows like this one on Jan. 17, “simple lines/quiet music/silent songs,” featuring the pianist Richard Valitutto. A daylong “house concert,” it’s organized around largely soft, contemplative works by the likes of Ann Southam and Alvin Curran. SETH COLTER WALLS

David T. Little’s “Soldier Songs,” for baritone and small ensemble, was born of the American invasion of Iraq. But, based on interviews with veterans of five wars, it speaks to conflict more generally and abstractly. And like the most satisfying politically minded art, it’s rife with complication — not just in the score’s uninhibited blending of genres, but also in the treatment of its subject, defying stereotypes and hagiographies. “Soldier Songs” puts you off as it draws you in, and it will haunt audiences anew in a virtual production presented by Opera Philadelphia, directed by and starring the baritone Johnathan McCullough. JOSHUA BARONE

As concerts have moved online during the pandemic, many have also gotten shorter. Thus “Schwanengesang,” the shattering collection of Schubert’s final songs, can more easily stand alone on a program — as it does in this Wigmore Hall stream from the baritone Christian Gerhaher and the pianist Gerold Huber, one of the great musical partnerships of our time. The duo also appear earlier in Wigmore’s richly scheduled January, presenting works by Schumann and Debussy (Jan. 25). Other hall highlights include the soprano Lise Davidsen, singing Grieg, Sibelius and more (Jan. 17), and the pianist Igor Levit, playing Hindemith, Schoenberg and Busoni (Jan. 29). JOSHUA BARONE

This ensemble has been offering a series of documentary-style, hourlong discussion and performance programs called BSO Sessions. “Twelve” looks at composers who have bridged contemporary classical music and pop. There will be performances of a suite by Jonny Greenwood, of Radiohead, from his score for the film “There Will Be Blood”; Bryce Dessner’s “Lachrimae”; and Caroline Shaw’s “Entr’acte.” Steve Hackman, a composer and arranger skilled at this crossover, discusses the music and the stylistic overlaps with musicians from the orchestra. Nicholas Hersh conducts. ANTHONY TOMMASINI

This orchestra, which has been streaming performances filmed at its Bridgewater Hall in Manchester, England, has an intriguing program coming up featuring the pianist Isata Kanneh-Mason, the eldest of the seven young, gifted members of a British musical family that has been gaining international attention. She plays Beethoven’s Piano Concerto No. 3 on the program, conducted by Mark Elder, which opens with Richard Strauss’s Serenade for winds (written when its composer was 17) and ends with Sibelius’s Third Symphony. ANTHONY TOMMASINI

The trumpeter Peter Evans is a reliable source of thrilling virtuosity. That’s true when he’s working with the Wet Ink Ensemble or International Contemporary Ensemble, as well as when he’s leading his own groups. This quartet, with the electronics and percussion specialist Levy Lorenzo, the violinist and vocalist Mazz Swift and the pianist Ron Stabinsky, recently celebrated the release of a blazing album, “Horizons.” But this livestream won’t be a victory lap; it promises a fresh slate of compositions by Mr. Evans. SETH COLTER WALLS