12 Pop, Rock and Jazz Concerts to Check Out in N.Y.C. This Weekend

Our guide to pop and rock shows and the best of live jazz happening this weekend and in the week ahead.

AFROPUNK at Commodore Barry Park (Aug. 24-25, noon). Now in its 15th year, this festival has expanded far beyond its roots in the D.I.Y. community that was seeking space for black punk bands. Recent iterations have drawn more heavily from the realms of soul, rap and R&B, booking big names to draw tens of thousands of attendees to the two-day event in Fort Greene, Brooklyn. This year’s headliners include the cosmic jazz revivalist Kamasi Washington, the neo-soul singer Jill Scott and the British pop hypnotist FKA Twigs; other noteworthy acts include the surrealist rapper Tierra Whack and the singer-songwriter Lianne La Havas. Saturday’s general admission tickets have sold out, but tickets for Sunday are available, as are V.I.P. tickets and weekend passes.
afropunk.com

MARY J. BLIGE AND NAS at Barclays Center (Aug. 28, 8 p.m.). On Wednesday, this co-headlining tour will bring two veterans of hip-hop and R&B to Brooklyn. For Blige and Nas, both native New Yorkers, this homecoming date is part of a monthslong victory lap celebrating their breakout albums, both of which were released 25 years ago: Blige’s sophomore effort, “My Life,” and Nas’s “Illmatic,” a vital rap touchstone that captured life inside Queensbridge, the nation’s largest public housing project. Fans who can’t make it to this show will get a second chance early next month, when the pair return to the area for a date at Newark’s Prudential Center.
917-618-6100, barclayscenter.com

EMERGING MUSIC FESTIVAL at Bryant Park (Aug. 23-24, 6 p.m.). Though Afropunk will draw a large contingent of New York music fans to Brooklyn this weekend, an alternative offering will take place at this Midtown park. Now in its fifth year, this festival invites a lineup of up-and-comers to perform at this open air, open doors event. Friday night’s bill includes the Muckers, a Brooklyn-based psych-rock group whose frontman, Emir Mohsseni, was inspired by the Strokes to pursue a career in music — a passion that brought him to New York all the way from his native Iran. Saturday’s must-see set will be delivered by Tomberlin, an indie-folk singer whose 2018 debut, “At Weddings,” recalls Grouper and early Sharon Van Etten.
212-768-4242, bryantpark.org

JONAS BROTHERS at Madison Square Garden (Aug. 29-30, 7:30 p.m.). This June, with much ado — including a whirlwind press tour and a documentary about their musical journey — these newly reunited former teen heartthrobs put out their first album together in a decade. Titled “Happiness Begins,” the new release from Kevin, Joe and Nick offers an updated take on the stadium-friendly guitar-pop songs that made them stars in the mid-2000s. Back-to-back shows at the Garden will offer the brothers a chance to play their new material, as well as old favorites like “Burnin’ Up” and “When You Look Me in the Eyes.”
212-465-6000, msg.com

[Read about the events that our other critics have chosen for the week ahead.]

MIJA at Elsewhere (Aug. 23, 5 p.m.). Though this producer and D.J. from Phoenix made her name spinning EDM on the festival circuit, she has been steadily diversifying her creative output. She has written poetry, composed music for anime soundtracks and teased pop reinvention with “How to Measure the Distance Between Lovers?,” her 2018 EP, and through a recent tour on which she sang live for the first time. Still, Mija hasn’t forsaken her roots: Her most recent single, “Sweat It Out,” is a summery house track distributed by the electronic label Hot Haus. Expect to hear it when she plays this rooftop stage in Bushwick, Brooklyn, alongside Bearcat, a London-born D.J. and member of the Discwoman collective.
elsewherebrooklyn.com

JOANNA STERNBERG at Trans-Pecos (Aug. 28, 8 p.m.). “Then I Try Some More,” the debut album from this New York-based singer-songwriter, can be a tough listen — though certainly not for a lack of musical skill that went into its making. Sternberg, who studied at the School of Jazz and Contemporary Music at the New School, writes smart, tightly woven songs indebted to the blues tradition as well as to singer-songwriters like Elliott Smith. Their difficulty comes by way of their subject matter: Across the album, Sternberg wades through feelings of profound loneliness, self-loathing and gender dysphoria. Still, the set offers a sense of communion for others who have experienced Sternberg’s struggles. In Ridgewood, Queens, Sternberg will share a bill with the folk singer Gabe Goodman and Michael Doherty from the group Another Michael.
thetranspecos.com
OLIVIA HORN 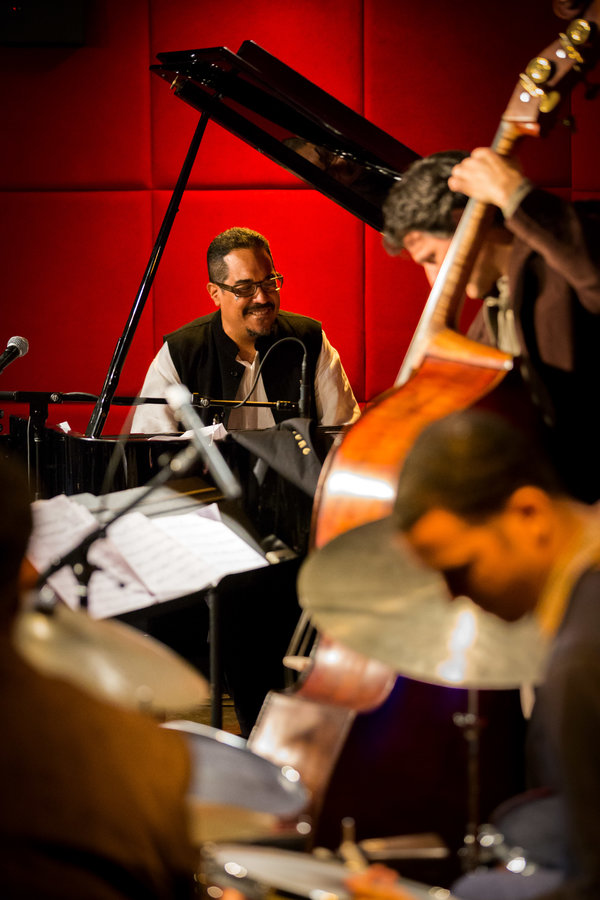 JOHNATHAN BLAKE AND PENTAD at the Jazz Gallery (Aug. 27-28, 7:30 and 9:30 p.m.). Blake’s drumming is as bold as thunder and as subtle as the patter of rain. He recorded his most recent album, the impressive double disc “Trion,” over a couple nights last year at the Jazz Gallery. He returns to that club on Tuesday and Wednesday with Pentad, a new ensemble featuring some of New York’s finest young musicians. As you might have guessed, Trion was a trio, and Pentad is a quintet; it features Immanuel Wilkins on alto saxophone, David Virelles on piano, Joel Ross on vibraphone and Dezron Douglas on bass.
646-494-3625, jazzgallery.nyc

ANDREW CYRILLE QUARTET at the Village Vanguard (through Aug. 25, 8:30 and 10:30 p.m.). In recent years, this 79-year-old drummer and avant-garde luminary has become a frequent presence at the Vanguard. That makes him one of the most eminent and experimental musicians to appear regularly at the storied club. Through Sunday he will be here with a quartet featuring the guitarist Bill Frisell, the pianist David Virelles and the bassist Ben Street.
212-255-4037, villagevanguard.com

EDDIE PALMIERI at the Blue Note (through Aug. 25, 8 and 10:30 p.m.). At 82, this pianist is showing no fatigue. Last year he put out two invigorating albums — “Full Circle” and “Mi Luz Mayor,” explorations of the big-band salsa sound that has been his primary medium in recent decades — on his newly established imprint, Uprising Music. And he continues to perform regularly around New York, the city with which his creative identity has always been bound up. He performs here with Jonathan Powell on trumpet, Louis Fouché on saxophone, Jimmy Bosch on trombone, John Benitez on bass, Camilo Molina on timbales and Little Johnny Rivero on congas.
212-475-8592, bluenote.net

CHARLIE PARKER JAZZ FESTIVAL at various locations (through Aug. 25). A trusty New York ritual now in its 27th year, this festival attracts overflow crowds to public parks throughout Harlem and the East Village. The highlights come at Marcus Garvey Park — where Mwenso and the Shakes will present their nouveau jazz revue on Friday evening, and the vocalist Dee Dee Bridgewater will top the bill on Saturday afternoon — and at Tompkins Square Park on Sunday afternoon, when the drummer Carl Allen will pay tribute to Art Blakey, and the tenor saxophonist George Coleman, a National Endowment for the Arts Jazz Master, will lead a trio.
cityparksfoundation.org/charlieparker

DANILO PÉREZ GLOBAL MESSENGERS at Jazz Standard (Aug. 23-25, 7:30 and 9:30 p.m.). Pérez is an esteemed pianist known for his own music — unifying the sound of his Panamanian homeland with contemporary American post-bop, as well as West African influences — and for his role in Wayne Shorter’s longstanding quartet, with which Pérez has won two Grammys. But in recent years he’s also become renowned for his education and advocacy work, including establishing a major jazz festival in Panama and founding the Berklee Global Jazz Institute. Pérez performs here with Global Messengers, a newly assembled group that seeks common ground across nationalities and traditions; it features Farayi Malek on vocals, Vasilis Kostas on laouto (a Greek stringed instrument), Layth Al-Rubaye on violin, Naseem Alatrash on cello and Tareq Rantisi on percussion.
212-576-2232, jazzstandard.com

TRIO DA PAZ AND FRIENDS at Dizzy’s Club (through Aug. 25; Aug. 27-Sep. 1, 7:30 and 9:30 p.m.). This triumvirate of Brazilian jazz all-stars is now in their 33rd year, and for the past 12 they have enjoyed an extended summer residency at Dizzy’s. This year’s engagement began on Wednesday and will run through the start of September. Together, the guitarist Romero Lubambo, the bassist Nilson Matta and the drummer Duduka da Fonseca play stylish, acrobatically executed music somewhere between bossa nova, classic samba and Afro-Cuban jazz; at this year’s residency they will be joined each night by three special guests: the vocalist Maucha Adnet, the tenor saxophonist Harry Allen and the trumpeter Claudio Roditi.
212-258-9595, jazz.org/dizzys
GIOVANNI RUSSONELLO