12 Times Britney Spears Made Our Jaws Drop Since 2000

Britney Spears basically invented what it means to be a modern pop star. It’s not just the music or dancing — it’s making people never want to look away. Britney turns 39 today, and we looked back on her most shocking moments of the 2000s to celebrate this icon’s birthday. Ready for a trip down memory lane?

While this year was a slightly rocky one for Britney as her family’s drama amid the #FreeBritney movement continues, the pop star certainly seems to be taking control of her future. In November, she announced that she would not perform any further shows while her father was still in charge of her career after a ruling on her conservatorship, and she’s recently reconnected with sons Sean and Jayden.

Whatever comes next, we’ll be rooting for the princess of pop. Now let’s look back at the wildest moments she’s shared with us since 2000. 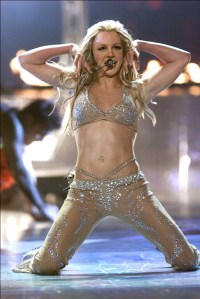 Has any performer done as much for an awards show as Britney’s done for the VMAs? Starting with her 2000s performance — and this infamous bodysuit — Britney let the people know: If you want to see history in action, you better watch the VMAs.

That time she performed with a snake at the 2001 VMAs

After the attention Britney’s 2000 performance got, maybe she was worried about topping it — but hey, a giant live python always livens up a show! In 2012, Britney posted a goofy throwback to the show on Instagram, writing “Sometimes I wonder what this snake is up to these days… Anybody know where it’s at?”

That time she played the Super Bowl halftime show with NSYNC

Aerosmith, NSYNC, Nelly, Mary J. Blige and Britney Spears all took the stage at the 2001 Super Bowl halftime show in what — in retrospect — may have been the greatest moment of the last 20 years.

That time she kissed Madonna at the 2003 VMAs 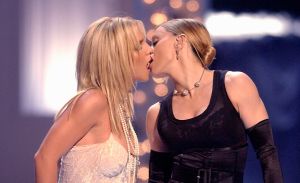 What can we say that hasn’t been said? Britney Spears and Madonna kissed on stage at the VMAs, and the entire world exploded. That’s about it.

That time she changed music history with the “Toxic” music video

Admit it: you pictured Britney’s flight attendant costume without even thinking about it. The Grammy-winning song’s music video has over 50 million YouTube views for a reason: it’s an instant classic.

That time She released a reality show with ex Kevin Federline

Britney and Kevin: Chaotic was a five-episode reality series that the recently-married couple released in 2005. Audiences were largely confused by the series (and that whole relationship TBH), and Britney now calls it “the worst thing I’ve done in my career.” (The show, not the marriage.)

Speaking of, um, interesting career moves, Chaotic marked a kickoff to a rough period in Britney’s life, when she became overwhelmed by paparazzi attention and lashed out — including shaving her head at a hair salon in California and attacking a photographer’s car with an umbrella a few days later.

That time she inspired the “Leave Britney Alone” meme

When Britney performed at the 2007 VMAs, many were hoping it would be her comeback — but the performance was awkward, low-energy, and left fans disappointed. In fact, the media was so harsh that YouTube star Chris Crocker posted an impassioned plea for outlets to “leave Britney alone.” The rest is meme history.

That time she kissed Rihanna at the 2011 Billboard Music Awards 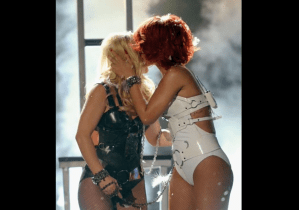 Happily, two women kissing on stage was no longer as earth-shattering in 2011 as it was in 2003 — but oddly, the two stars locking lips never made it to the air. After the duo performed “S&M” together, outlets at the time reported that Britney and Rihanna shared an “incredibly brief” kiss. ABC has never commented on why that didn’t appear on the live show.

That time she announced her Vegas residency

Stars like Mariah Carey, Jennifer Lopez, and Gwen Stefani have all enjoyed stints in Las Vegas, but Britney was early to the trend when she announced her Piece of Me residency in 2013. In many ways, this show got Britney back on the map as a performer.

With over 319 million views on YouTube right now, this video cemented Britney’s return as the queen of pop — and the song has been more or less stuck in our heads since.

That time she announced an indefinite hiatus

In January of this year, Britney called off her new Vegas show Domination, citing her father’s health scare as the reason she was stepping back. In the months that followed, Britney entered into a mental health facility, and the #FreeBritney movement took off, suggesting Britney was being controlled and forced into certain actions against her will. In April, Britney released a video warning fans not to “believe everything you read and hear.”

We’re still waiting for Britney to return from her hiatus — but until she does, we hope she’s enjoying relaxing time with family and friends. Happy birthday, Britney! You really are the gift that keeps on giving.