The world could use a little uplifting sublimity right now, and this astounding two-artist show delivers. It brings together 17 paintings by Frederic Edwin Church (1826-1900), exemplar of the Hudson River School, and 10 canvases by the Abstract Expressionist Mark Rothko (1903-1970). They have been color-coordinated to delirious effect by the art historian Michael N. Altman and Christopher Rothko, Rothko’s son. Church, in particular, has rarely looked so good. Unburdened by representation, Rothko’s suspended blocks of autonomous color accentuate the strangeness of Church’s palette, especially the array of lavenders, pinks and yellows in his skies. 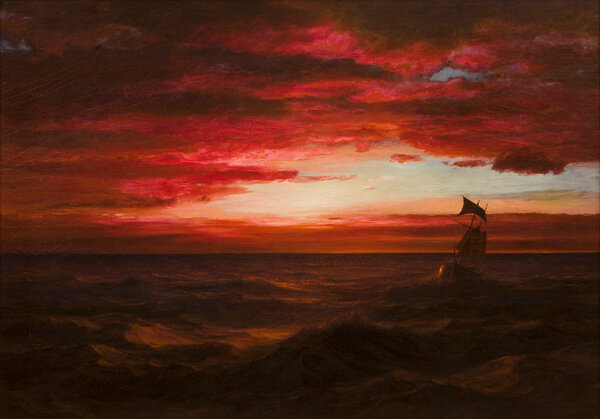 The show’s opening combination is breathtaking. On one wall Rothko’s “Browns and Blacks in Reds” (1957) presents a glowing stack in brown, red and black on a red ground. Adjacent is Church’s “Marine Sunset (The Black Sea),” from 1881-82, an expanse of shockingly deep red sky with a little sun peeping over a choppy black sea tossing a dark ship. The colors are as blunt as the Rothko’s.

The basis for this pairing begins with “The Abstract Sublime,” an influential article by the art historian Robert Rosenblum that appeared in ArtNews in 1961. Rosenblum proposed that the Abstract Expressionists’ distillations of light, color and space into expansive planes of color were the heirs to the sublime-evoking landscapes of the Northern Romantic painters from 19th-century Germany and England, later expanding his thesis into a book that included the American Hudson River School painters.

There was mutual benefit to this argument. It grounded Abstract Expressionism in art history and also in reality, increasing its credibility outside the art world. And the Hudson River School, which had only begun to attract attention from scholars and curators, gained contemporary relevance. It could be argued that Rothko’s works have less in common with Church’s realism and gleaming light than with the soft brushy views frequently found in the landscapes of the American painter George Inness (1825-1894). But that’s another exhibition.

The New York art world in the 1990s is not as notable as that of the tumultuous ’60s, which produced Minimalism, or of the fiscally troubled ’70s, which saw the rise of the loft aesthetic and a globally influential form of graffiti art. But the ’90s was an important moment of transition, a period that the collective Art Club 2000 captured incisively in its photographs and installations currently on view at Artists Space.

What might seem like insider jokes about art, branding and “lifestyles” ultimately resulted in cringe-worthy documentations of downtown New York’s transformation into a retail mecca, with artists pushed out by gentrification. After all, unlike generations who battled the Vietnam War or the AIDS crisis, these artists were up against more insidious opponents, Starbucks and the Gap. The fight seemed futile: Irony rather than activism was their most potent weapon. Moreover, while Art Club 2000 was happening, Mr. de Land simultaneously help found the Armory Show art fair, contributing to the very consumerist phenomena that Art Club 2000 parodied, satirized and critiqued in their work.

From 1984 to 1987, using a homemade pinhole camera and paper negatives, Paul Smith photographed rubble-strewn streets and outdoor gay sex in his Lower East Side neighborhood. By extending the exposure time to three minutes and curving the film plane, he created hallucinatory images that feel more like a shadowy collective memory than documents of a historic time and place. A critic and curator as well as an artist, Mr. Smith exhibited at all of the now fabled East Village galleries of the time. In these little known pictures, which are presented here under the title “The Human Curve,” everything is in focus, but what is closest to the aperture looms freakishly large, and the lengthened exposures produce blurring and graininess in moving bodies.

Mr. Smith took numerous pictures on the roof of his apartment building, which was dominated by a pair of phallic exhaust pipes, posing his friends as they engaged in sunbathing or sex. In one, a naked man’s long arm with exaggerated fingers stretches toward an ashtray. A second one depicts two shirtless men, one standing on the roof edge, the other sitting propped up against the back of the cornice, viewed through the curving frame of sunglasses, while a streetscape of derelict buildings (the subject of other pictures) lies below. Some prints in the show were mounted to curved metal supports, but the images are more effective straight up. They are ghostly emanations, from a place and a culture that was about to be destroyed by AIDS and gentrification.