5 Ways To Protect Our Election During The Coronavirus Pandemic, According To A New Bipartisan Election Emergency Task Force 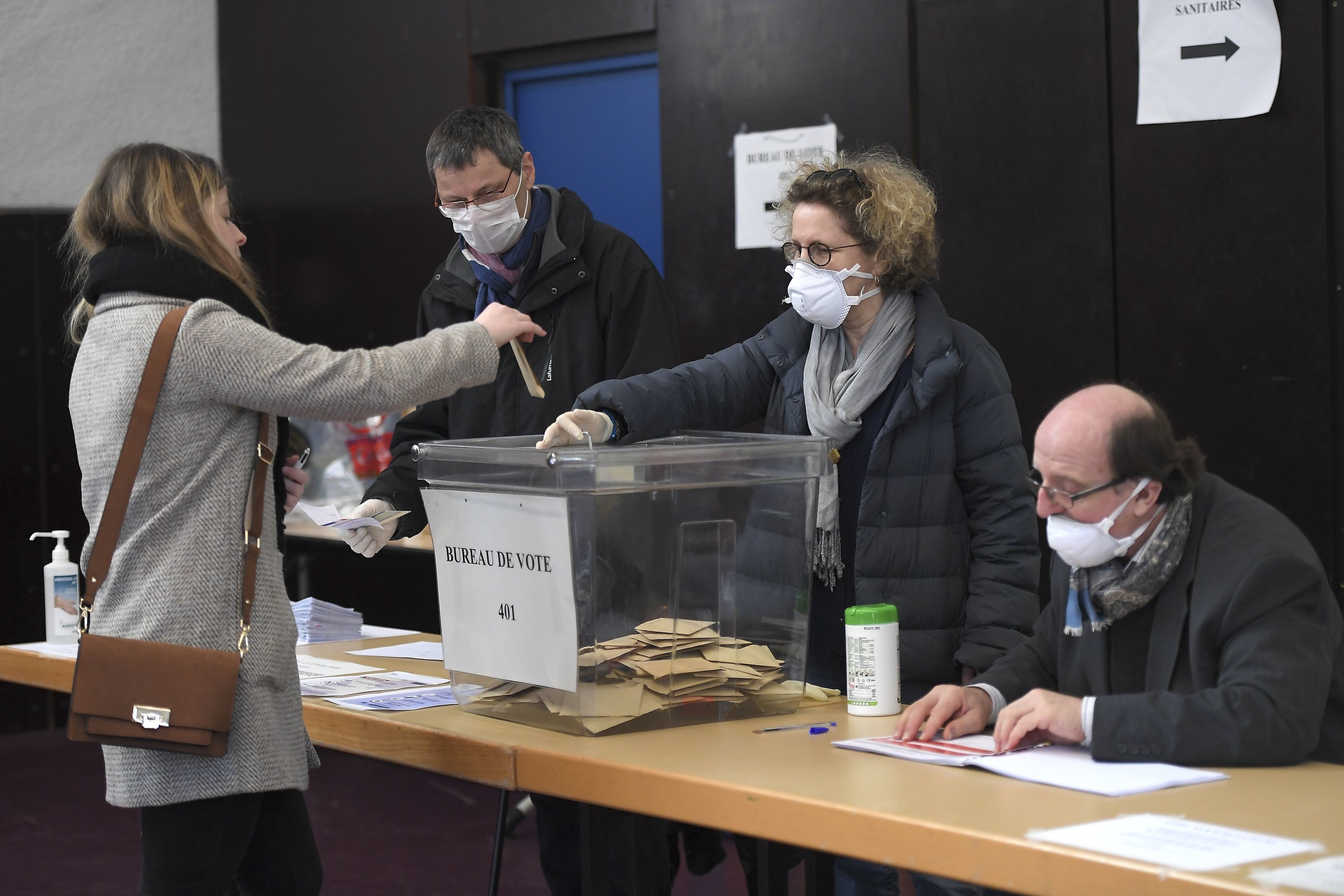 A voter casts her ballot as officials wear protective face mask during the first round of the French municipal elections on March 15.

The journalists at BuzzFeed News are proud to bring you trustworthy and relevant reporting about the coronavirus. To help keep this news free, become a member and sign up for our newsletter, Outbreak Today.

Dozens of former Republican officials and progressive leaders have banded together to form a new task force on election emergencies, publishing a set of guidelines on Thursday about how to protect the November election during the coronavirus pandemic — from expanding mail-in voting to sanitizing in-person voting locations.

Given the pressure to postpone presidential primaries, the National Task Force on Election Crises issued an 11-page guide aimed at public officials in charge of the general election, saying, “There is significant reason to be concerned and an imperative to prepare for the worst.”

“This virus has been a wake up call,” Michael Chertoff, the former Secretary of Homeland Security under President George W. Bush and a member of the task force, told BuzzFeed News, saying the task force had begun to form last year amid concerns of foriegn interference, misinformation, and other disasters — including disease.

The election should be held as required by federal law on Nov. 3, the report recommends, saying maximum participation will bolster confidence in “the legitimacy of the outcome of the election.” (BuzzFeed News reported on March 13 why changing the general election date would be difficult, and maybe logistically impossible.)

“An event like the one we are going through now underscores the real importance of the public having faith in its institutions,” Chertoff said, adding that the task force’s diverse membership lends credibility as they put pressure on secretaries of state and county election directors to adopt their recommendations.

The task force’s members include prominent progressives, such as Kristen Clarke, executive director of Lawyers’ Committee for Civil Rights Under Law, and Vanita Gupta, president of the Leadership Conference on Civil & Human Rights. It also includes conservative leaders, such as Trevor Potter, former chair of the Federal Election Commission, and Trey Grayson, Kentucky’s former secretary of state.

These are five of the task force’s recommendations:

Officials should contact voters proactively to ask if they want an absentee ballot. Not all states allow everyone to use a mail-in ballot (also called an absentee ballot or absentee voting) unless they declare an specific excuse in advance, such as travel or an emergency. As such, the task force says the chief election officials in each jurisdiction should immediately declare that “coronavirus is deemed a legally sufficient ‘excuse’ to enable absentee voting by all eligible voters… If this requires enacting emergency legislation in a jurisdiction, state legislatures should do so.” Further, the task force says elections officials should post PDFs of the forms online for voters to request those absentee ballots.

The guide doesn’t recommend switching entirely to mail-in voting, but it says, “election officials should order sufficient quantities of paper ballots to conduct a 100% mail-based election, if necessary.”

In addition to hiring more poll workers to manage these new systems, the guide encourages extending both voting hours and the number of days for early voting, including on weekends, in order to “reduce the number of people in a polling place at any one time, thereby reducing the likelihood of coronavirus transmission.

“Election officials should ensure that each polling place is well-stocked with hand sanitizer and antibacterial, antimicrobial cleaning supplies, which should be used, among other things, to disinfect voting machines and voting equipment (including pens and touchpads) between each and every use,” the guide says. “Each poll worker should be provided with surgical gloves and a surgical mask (if consistent with public health guidance at the time).”

Officials should “prohibit any person known to be infected with the coronavirus from entering a polling place” when law allows, the guidance says, and provide those voters an absentee ballot. Inside polling facilities, tape should be placed on the ground six feet apart “to indicate where voters should stand” when waiting in line. Voters should also be able to vote curbside or have separate sites for people at high risk — such as those with compromised immune systems.

If an area is known to have an exceptionally high concentration of the virus, or if a location presents an exceptional risk, such as a nursing home, officials should create a different polling site. It also suggests simply creating additional polling locations, thereby “reducing the likely size of any crowds or number of people standing in line.” It also considers using bigger buildings — or “supercenters” — that allow more distance between each person. “Larger facilities may offer a good addition or alternative to smaller polling places.”

Do you have questions you want answered? You can always get in touch. And if you’re someone who is seeing the impact of this firsthand, we’d also love to hear from you (you can reach out to us via one of our tip line channels).

END_OF_DOCUMENT_TOKEN_TO_BE_REPLACED

END_OF_DOCUMENT_TOKEN_TO_BE_REPLACED
We and our partners use cookies on this site to improve our service, perform analytics, personalize advertising, measure advertising performance, and remember website preferences.Ok