A Group Of Teens As Young As 13 Brutally Beat A Man Outside A DC Hotel, Police Say 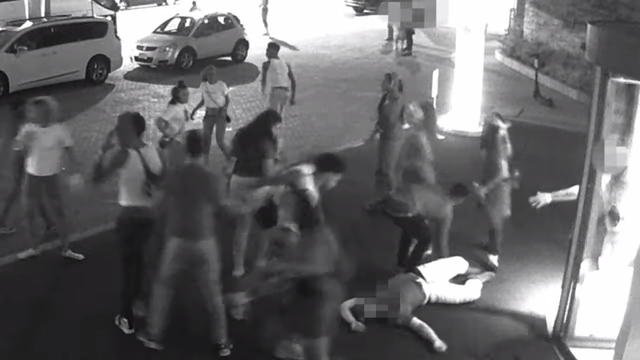 Police in Washington, DC, are trying to identify a group of about a dozen teens — who appear to be as young as 13 years old — caught on surveillance footage beating a man to the ground.

In the disturbing footage, a large group of young male and female teens can be seen punching and stomping on a man before fleeing the scene. One appears to spit on the man before running away.

According to a police report, a man from Hampton, Virginia — who was with the victim seen in the video — heard one of the teens yell “that’s him” while pointing at the victim, who is from Newport News, Virginia.

The Hampton man told police he tried to stop the attack, telling them “that’s not him, you have the wrong person!” but was unsuccessful. According to WJLA he punched while attempting to intervene.

Both victims were transported to the hospital with non-life threatening injuries, police said. The Newport News man was treated for injuries to the head and left eye socket, and the Hampton man, who was injured less severely, suffered a swollen left eye.

Police told BuzzFeed News they are seeking between 10 and 14 suspects, if not more, that they appear to be ages 13 to 14.

Metropolitan police department spokesperson Dustin Sternbeck told BuzzFeed News the incident remains an active investigation. He added that the motive of the attack “is not known at this time but we hope to swiftly identify the individuals responsible.

Sternbeck told the Washington Post the incident may have been a case of mistaken identity, adding that “we only have one side of the story.”

In a news conference on Thursday, DC Mayor Muriel Bowser reportedly said the brutal beating would not be treated like a “schoolyard prank.”

“That’s an assault. And it carries jail time,” Bowser said. “And so we want those people to know, young people — we don’t know how old they are — that this is not a game. They’re real people on the other end of this attack.”

A spokesperson for the hotel did not immediately respond to a request for comment from BuzzFeed News, but told WJLA they believe the “events leading up to the attack outside the front door of the hotel began at a nearby bar.”