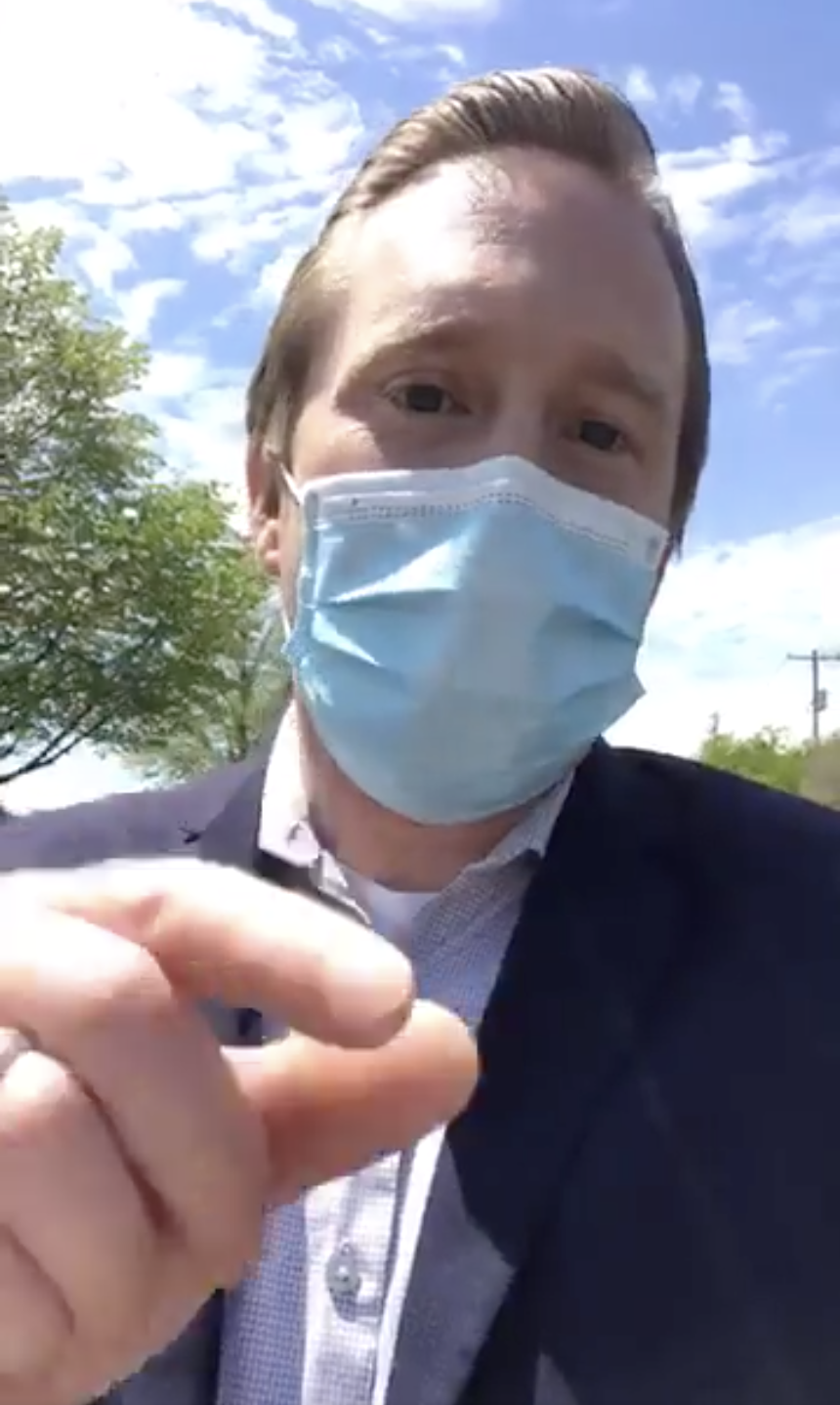 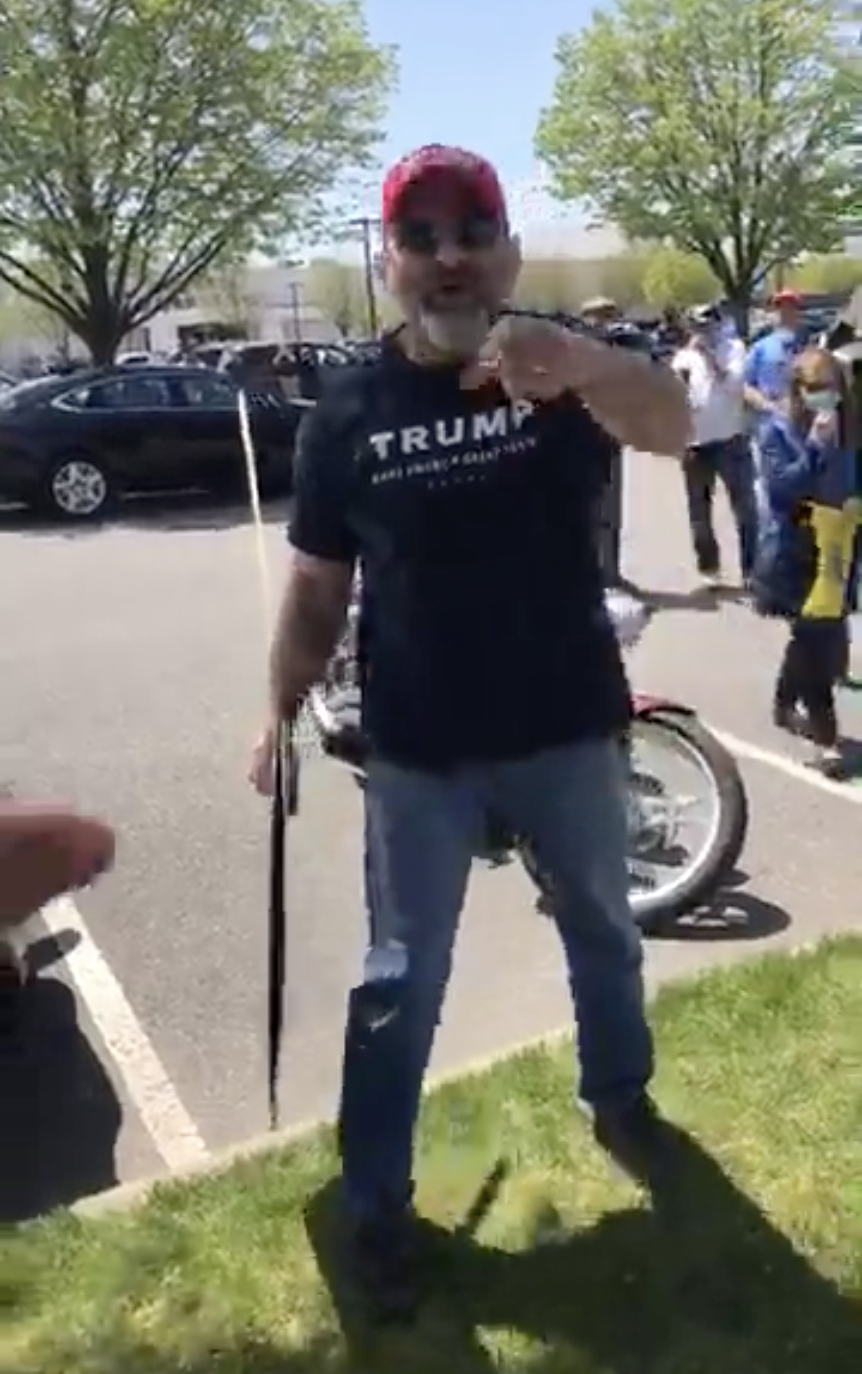 BuzzFeed News has reporters across five continents bringing you trustworthy stories about the impact of the coronavirus. To help keep this news free, become a member and sign up for our newsletter, Outbreak Today.

Kevin Vesey has been a reporter for News 12 Long Island in New York for 8 years. On Thursday, he went to Commack, Suffolk County, to cover a protest against Gov. Andrew Cuomo’s stay-at-home order over the coronavirus.

While broadcasting the protest on Facebook Live, Vesey interviewed people about why they were out protesting. A few minutes in, the crowd turned hostile, and protesters — some without masks on — started confronting him.

One woman wearing an NYPD hat and carrying a loudspeaker screamed, “Why are you essential? Why?”

Another man in a “Make America Great Again” shirt followed him as Vesey repeatedly asked him to “back away.”

“Nah, I got hydroxychloroquine,” the man replied, referring to an unproven drug heavily touted by Trump as a treatment for COVID-19. “I’m fine.”

In another clip of the video, protesters called Vesey “disgusting” and “the enemy of the people.” They also chanted “fake news is not essential” as he tried to report on camera.

The videos, which Vesey posted on Facebook and Twitter, have led to widespread criticism against the protesters.

As the weather turns warmer, people have been protesting the continued closures of businesses deemed nonessential, and demanding an end to stay-at-home orders. Public health experts, however, have warned that these measures could trigger another round of coronavirus outbreaks across the country, especially without a vaccine.

The organizer of the protest, a local pro-Trump group called the Setauket Patriots, apologized to Vesey on Thursday evening.

“Kevin, The Setauket Patriots group, would like to apologize on how you were treated,” the group said in a Facebook post. “This wasn’t a Trump event but an Open up NY Rally and we invited all Long Islanders to attend. We can tell you that the few who decided to Harass you and try to prevent you from doing your job are not members or affiliated with the Setauket patriots group in any way, shape or form.”

The group noted that they were “looking forward” to Vesey’s fair coverage, but acknowledged that as with many large rallies, “you will always get a few idiots to disrupt an otherwise peaceful, pleasant demonstration and they should have been removed by Police.”

Then on Friday night, President Trump weighed in on the video, retweeting Vesey with the caption “FAKE NEWS IS NOT ESSENTIAL!”

He shared Vesey’s video again on Saturday morning. “People can’t get enough of this,” he wrote. “Great people!”

News 12 did not make Vesey available for an interview, but a spokesperson told BuzzFeed News, “the events that transpired during Kevin’s reporting were unfortunate but he calmly and objectively captured the raw emotion occurring during this pandemic.”

In a News 12 clip talking about his experience at the protest, Vesey said some of the protesters who reacted angrily in his video had accused him of reporting on them unfairly at a similar protest two weeks ago.

“Which is fine, they’re entitled to their opinion on that,” he said.” We just reported the facts and made some pretty obvious observations on what was happening.”

Vesey, who said he recently recovered from COVID-19, explained that he grew up near Commack and often went to the diner and pizza place there with his family.

He said his positive experiences covering the Long Island community have “far outweighed stuff like this.”

“That is my home as much as it is anyone else’s,” he said. “I know there are a lot of really great people over there, so this is certainly not indicative of everyone from that area. I know that.”