One day in 2016, Torrey Townsend unexpectedly received a message from Robert O’Hara, a writer and director then on the rise thanks to his raucous, exuberantly provocative satires “Bootycandy” and “Barbecue.”

The email was actually sent to Townsend’s boss, the artistic director of a respected New York theater, but he had access to the account as part of his administrative duties. O’Hara was not writing about some exciting new project, though.

He was calling out the company, which both men declined to identify, for its failure to employ artists of color.

“He really struck me as somebody who I felt aligned with politically,” Townsend said. He reached out and eventually invited O’Hara to his show “The Workshop,” in which an aging almost-was leads students in a playwriting class. 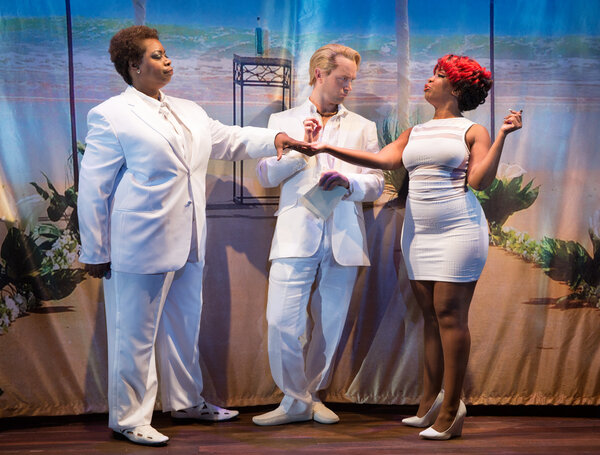 “I was enthralled and amazed,” O’Hara said. “It challenged sacred cows of our industry, and I think we all need to be held accountable for the work we do.” He agreed to direct Townsend’s new play, “Off Broadway,” a lacerating, wickedly funny portrait of a struggling New York company whose leaders are willfully oblivious of their racial and gender biases, which include stunt casting so preposterously offensive, you can only laugh at it. Enablers of the status quo, meanwhile, include a wealthy patron and, yes, The New York Times.

O’Hara’s star rose further after he directed Jeremy O. Harris’s “Slave Play,” and an industry reading of “Off Broadway,” starring Dylan Baker as the white heir apparent to a white artistic director, took place in 2019. “If Robert wanted me to work on something, I was totally going to do it,” Baker said. “And as soon as I read the script I said ‘Who is this guy Torrey Townsend? He knows how to write.’ ”

Yet the play wasn’t getting picked up, with only the Brooklyn incubator the Bushwick Starr expressing interest, according to Townsend.

Eventually, he and O’Hara worked out a deal for a streaming iteration with Harris, who has been helping produce theatrical projects (including the recent Pulitzer Prize finalist and digital native “Circle Jerk”) with HBO seed money, and producers from “Slave Play.” The production — with Baker again, alongside his wife, Becky Ann Baker, Jessica Frances Dukes, Richard Kind and Kara Wang — has already been recorded, and will be free to stream on the new platform Broadstream Media from June 24-27. (Advance sign-up is required.)

O’Hara and Townsend recently sat down for a joint video chat about the nonprofit theater world’s dysfunctions and the play’s comedic sneak attacks. These are edited excerpts from the conversation.

Do you think American theater is wary of scrutinizing itself too closely because it feels so beleaguered that it closes ranks?

ROBERT O’HARA Yes, and we also take things much more personally: We think that if you talk about a play, you’re actually talking about the personal worth of the people who created it. And so if you criticize, it’s almost like you’re criticizing that person, as opposed to criticizing the institution and the systemic racism inside those choices.

I am obliged to point out the obvious, which is that Torrey is a white man.

Do you think theater has gotten away with so much for so long because it assumes artists can be judged by different rules?

TORREY TOWNSEND I think there’s a quasi-religious component to this whole culture. There’s no other way to explain the level of exploitation that goes on unless it’s being sustained by an illusion of that kind. In 2018, Michael Paulson published a story [in The New York Times] about Gordon Edelstein and the Long Wharf Theater. [Edelstein, at the time the artistic director of the theater, had been accused by multiple women of sexual harassment.] About six months later, a firm in New Haven hired an attorney, Penny Mason, to write an independent review. In her concluding remarks she says that Edelstein’s mantra at the theater was “we are a family” — not a workplace, a family.

O’HARA We’re always using words like “home” or “artistic home.” But there’s a level of abuse that happens in homes that we sort of allowed to happen: “Well, that’s just the way I was brought up.” We accept a level of trauma, I think, in our childhood and upbringing.

Why tweak “Off Broadway” so it now also deals with theater during Covid-19, instead of simply transposing the 2019 version on Zoom?

TOWNSEND The script lent itself to an update because it was already about the catastrophization of the theater. A lot of behavior that we witnessed in theaters during the pandemic has been totally absurd and deranged, and we wanted to honor that [laughs].

O’HARA I feel that it would be ridiculous to create a new piece about Off Broadway that doesn’t acknowledge that it was gone for a year. That, to me, led to an even deeper sense of satire: you’re still holding on to these beliefs, but you don’t have a theater.

“Off Broadway” has dark undertones, but it also is, unabashedly, a comedy. Was it hard to refine what gets a laugh, considering some of the subject matter?

TOWNSEND It requires constant effort, constant trial and error. It is very important to me that the work be funny.

O’HARA There’s a comfort level where people can laugh, and then you can get behind them and show them some truths. Sometimes funny is painful; sometimes pain is funny. Sometimes the way I can deal with the institutionalized racism and homophobia and sexism and assault and harassment is to simply laugh. Because if I don’t, I will go out and harm something, or harm an individual, or say things that are harmful.

Why focus on a small Off Broadway company?

O’HARA When you think of the shows that address the theater, they’re usually about Broadway. But on Broadway you have to create your whole team every time, whereas Off Broadway and regional theater are set inside institutions. And what an institution does with creativity is never really examined.

TOWNSEND It was important to me to weave the language about money into this play. The corporate world is more a part of the nonprofit theater world than we’re really aware of. There is a connection between this corporatization of American theater and the underlying abuse that ensues because we are conducting business as if we’re inside Trump Tower. I don’t think there’s a difference between the way Michael Cohen and Donald Trump are doing business and the way people are doing business inside an administrative office. It’s the dirty secret of the American theater: These theaters are run by bank managers, by accountants, and their donors are rich people working on Wall Street.

O’HARA I have been head-hunted to see if I was interested in running an institution, and one of the most important skills they are looking for is an ability to fund-raise. For an institution to work, you have to know the lay of the land. And the lay of the land is that, although it says nonprofit, we are not trying to lose any more money — we’re trying to get as much money as possible.

What is the solution: more public funding, more division of labor between artistic and fund-raising duties?

O’HARA One of the things I think is necessary is diversity. Diversity will breed different people with different skill sets to show you different ways to run this institution. You need to disrupt the person in charge, you need to disrupt what power means and how power is distributed. That in itself will generate a new relationship to fund-raising. I don’t know very many happy artistic directors. There’s also a level of division that needs to be had: Am I going to be the artistic head and can that actually allow other people to deal with the educational and the finances and all this other stuff?

The show points out how the system has long reproduced itself.