A Rare Peek Inside a Semi-Secret ‘Secret Garden’

When Marsha Norman suggested to the producer Jerry Goehring the idea of streaming the 2018 workshop of a stalled Broadway revival of “The Secret Garden” as a benefit, he thought it was a great idea.

He just didn’t know if it would be possible.

“I was like, ‘Honestly, I don’t know that it’s ever been done before,’” said Goehring, a member of the team angling to bring back to Broadway the sumptuous musical that has never been revived there since the Tony Award-winning 1991 production that starred Mandy Patinkin.

Securing the rights to stream a musical — much less a workshop, footage that was never intended to see the light of day and showcases actors in their rawest form — can be complicated.

But it helped that Norman, the musical’s Pulitzer Prize-winning book writer, was already on board — as was the new director, Warren Carlyle (“After Midnight”), and all 21 actors, among them Sierra Boggess (Lily), Clifton Duncan (Archibald Craven) and Drew Gehling (Neville Craven).

“They were all asking ‘Please, what can we do to help?’” Goehring said this week.

Getting buy-in from every member involved and compensating the actors were the stipulations for Actors’ Equity Association, the labor union, to grant permission for the project, which will benefit The Dramatists Guild Foundation and The Actors Fund.

“They said they rarely get requests for archival recordings,” said Goehring, who teamed with the producers Michael F. Mitri and Carl Moellenberg to develop the project. “But, if, at the end of the day, 100 percent of their members involved in the show agree, we could do it.”

The two-hour workshop, which includes a full run-through of the show sans costumes or sets, will premiere on Broadway on Demand on Thursday, May 6 at 8 p.m. and remain available through May 9. It is dedicated to Rebecca Luker, the musical’s original Lily, who died in December at age 59 less than a year after announcing she had A.L.S.

“It’s wonderful and terrifying at the same time,” said Carlyle, who directed and choreographed the workshop. “It’s in its rawest form, with all my terrible ideas and some good ones. It’s really like pulling back the curtain.”

Goehring said the workshop showcases the production at its “very beginning” stages — and was never intended to be seen by any kind of audience, much less the public.

“We didn’t plan on inviting anyone,” he said, noting that the authors had initially just wanted a chance to take their first look at the entire show — artistically. “But it turned out so special that everyone agreed we should invite our friends in the industry, including Broadway theater owners, to get their opinion.” 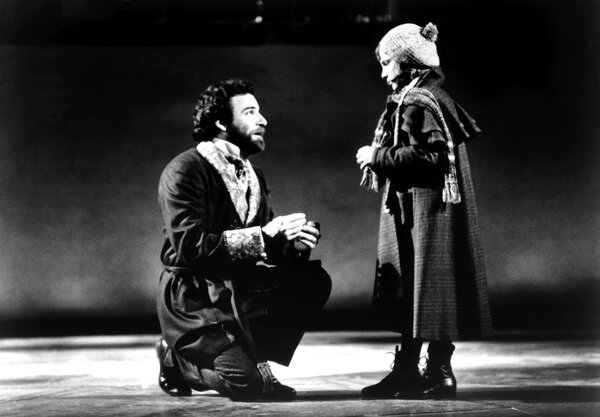 The musical, based on the 1911 children’s novel by Frances Hodgson Burnett, tells the story of an orphaned English girl whose personality blossoms as she and a sickly cousin restored a neglected garden. The original Broadway production earned three Tonys, with a cast that included Luker, Patinkin, a pre-Hedwig John Cameron Mitchell and 11-year-old Daisy Eagan, who won for her performance as the heroine Mary Lennox.

The revival, Carlyle said, is a “complete reimagining.” It will feature pared-back sets, more intimate orchestrations and different scenic design. But all of Lucy Simon’s songs are intact, he reassured fans of the original, just shifted around — not that anyone would dare cut “Lily’s Eyes.”

“We joke that we lost a lot of big bushes,” he said. “Lots of big scene transitions from back in the early ’90s have been eliminated, so it really flows much better.”

It’s clear, Carlyle said, that the workshop is a rough draft: The garden is imaginary; the dress code more T-shirts than waistcoats. Pieces of tape on the bare floor mark the edge of the stage, as well as where the wings would be. There are only a few props.

“There are no frills,” he said. “Which allows me, as a director, to make sure we’re getting the story right.”

To help people keep track of scene changes, the team inserted digital renderings by the production designer Jason Sherwood (“Rent: Live”) as transitions. But ultimately, Carlyle said, the material speaks for itself.

“The book Marsha has written and Lucy’s music are so strong that you can be in an empty room with talented artists and have it move you just as much as if it were on a Broadway stage,” he said.

There are reasons the show has never been revived on Broadway: Critics said the lavish set and elaborate costumes left the actors fighting to be in focus, and the book was overstuffed with secondary characters.

“Whether ‘The Secret Garden’ is a compelling dramatic adaptation of its source or merely a beautiful, stately shrine to it is certain to be a subject of intense audience debate,” The New York Times theater critic Frank Rich wrote in his review of the original. “I, for one, often had trouble locating the show’s pulse.”

Broadway is still a target for the future, Goehring said, though the pandemic has thrown the timeline in flux.

“We are not seeking new investment right now,” he said. “Our only goal is to raise money for the nonprofits.”

The 2018 workshop was the latest in a string of high-profile iterations of the musical, that also included a 2016 concert at Lincoln Center featuring Ben Platt, Ramin Karimloo and Boggess. David Armstrong directed a production at the 5th Avenue Theatre in Seattle and Washington D.C.’s Shakespeare Theater Company in 2016-17.

No cast has yet been set or theater secured, but Goehring hopes the orchestrations will begin taking shape in the fall.

“As soon as we can all get back in a room again, we’ll keep working on it,” he said.

“Our ultimate goal is to make this as good as we can,” he added. “However long that takes.”

Inside The Secret Garden: Workshop and Livestream Experience
May 6-9; livestream.broadwayondemand.com