A Theater in a California Canyon Becomes an Oasis Once Again

TOPANGA, Calif. — There were no famous names in the cast. It was the first staged professional production by a little-known playwright. And the theater was deep in the canyons of the Santa Monica Mountains, up a long windy road, midway between the beaches of the Pacific Ocean and the San Fernando Valley, a secluded bohemian outpost known for its artists, musicians and rattlesnakes.

But for all that, there were plenty of people at Will Geer’s Theatricum Botanicum on a recent Sunday night for a performance of “The Last, Best Small Town.” Wearing masks as required by the theater, 150 patrons sat on hard wooden benches in a cool summer night. A cast of eight actors exuberantly navigated the sprawling, asymmetrical stage, built around a California live oak tree and into the scrub of a hillside, scurrying along dirt trails to make their exit stage lefts and enter stage rights.

The Theatricum Botanicum was born amid the McCarthy-era political furor over concerns about alleged communist infiltration of Hollywood in the 1950s. It began as a retreat in the mountains where blacklisted actors, led by Will Geer, who had refused to testify before the House Committee on Un-American Activities, gathered to perform Shakespeare and Tennessee Williams for small audiences who wandered in off North Topanga Canyon Boulevard. 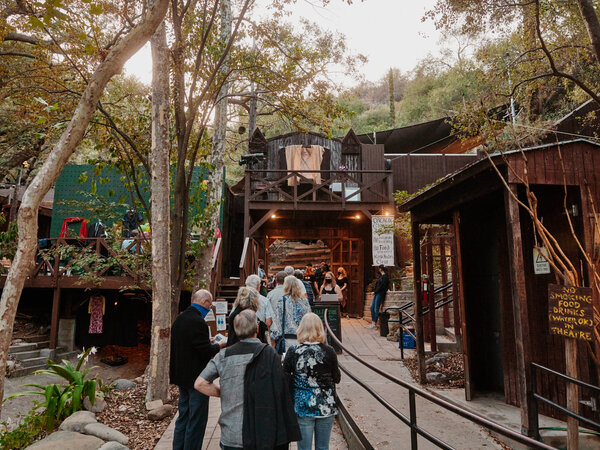 But this remote theater-in-the-woods, which for years was mainly known to an inside crowd of Topanga neighbors and the few theatergoers familiar with its history, is drawing crowds this summer even as it pushes ahead in the middle of a pandemic. The actors are appearing on a new stage, rebuilt with a grant while the theater was dark last season, replacing a jumble of dirt and rotting wood.

“This gorgeous outdoor space — it’s perfect for these times,” said Alan Blumenfeld, an actor who has been a member of the theater company for 36 years.

It has been drawing crowds of people who have been showing up with their proof-of-vaccination cards to take in a night of al fresco theater. (Unlike the East Coast, where rained-out performances have been common this summer, there is little chance that an outdoor show will get called for rain in any year, but particularly in the middle of the extended drought that has gripped the region.) The night before “The Last, Best Small Town” had drawn 150 people, close to 300 people showed up for “A Midsummer Night's Dream” — an usually high turnout at any time, and no matter that the official seating capacity is 299.

“People feel safer coming,” said Willow Geer, who is Will Geer’s granddaughter, and who appears in this year’s production of “Julius Caesar” as Portia. “And that has helped our situation.”

But its appeal is more than offering an under-the-stars, open-air stage in a year when many of the region’s small theaters, cramped and poorly ventilated, remain closed. The Theatricum Botanicum is idiosyncratic and unique, defined as much by its remote splendor as by the circumstances of its founding. Its legacy has been carefully tended by the members of the Geer family who have run and acted in this theater since Will Geer died in 1978, and who have found its ideological sensibilities particularly relevant during a time of pandemic and polarization.

“Theatricum Botanicum is to the Los Angeles theater scene what Topanga Canyon is to Los Angeles itself: It’s technically a part of the city, but it’s a world on its own,” said Steven Leigh Morris, the publisher of Stage Raw, a publication devoted to Los Angeles arts and culture. “It continues the legacy of Woody Guthrie and the F.D.R. sensibility to give people a break who otherwise wouldn’t have gotten a break. I have a soft spot for them. I really respect people who do this for a purpose. It’s not just vanity.”

Zev Yaroslavsky, who represented Topanga and helped win the theater county arts subsidies when he was a member of the Los Angeles board of supervisors, called it a “civil liberties billboard.”

“When I think of Topanga Canyon and the Theatricum Botanicum, it’s a constant history lesson of what can happen even in a democracy like ours when people stop being diligent,” said Yaroslavsky, who now teaches at the Luskin School of Public Affairs the University of California, Los Angeles. “The whole DNA of that theater is about eternal vigilance.”

Ellen Geer, a daughter of Will Geer and the theater’s artistic director, took delight the other day in recounting 70 years of history — of her family and the theater; they are that intertwined — as she led a leisurely walk across the 15 acres of gardens, theaters and shacks, including one where Guthrie, who was friends with Will Geer, lived for a time in the early 1950s.

“You must come back in the spring: there are daffodils on the hill,” said Geer, gesturing to the back of the stage as she settled into one of the benches in the amphitheater. “I think there’s a fox that lives in a hole up there.”

“My mother made me promise,” she said, “that when she’s gone, I wouldn’t let anyone pave the parking lot.”

The theater’s namesake, Will Geer — whose ashes are buried in the Shakespeare Garden, close to those of his one-time wife, the actress Herta Ware — is popularly known for playing Grandpa on the television show “The Waltons.” But that was a late-career resurrection for a well-known stage-and-screen actor who starred in “The Cradle Will Rock,” the leftist 1937 play about unionizing the steel industry, directed by Orson Welles.

He was blacklisted in 1951 when he invoked his Fifth Amendment rights in response to questions about communist infiltration of Hollywood before the House Committee on Un-American Activities. After Geer, unable to get work onstage or onscreen, lost his home in Santa Monica, he and Ware bought land here, about 25 miles from downtown Los Angeles.

Geer, a horticulturist by education, grew vegetables to feed his family. (Hence the name Theatricum Botanicum, which roughly translates to botanical theater.) And he began assembling other blacklisted actors for impromptu performances in the mountains. After a few years, Geer left Topanga and moved across the country, picking up occasional acting jobs. (He and his wife eventually divorced, but they remained friends.) With the money he earned from “The Waltons,” he returned to Topanga, gathered his family together, formally incorporated the Theatricum Botanicum in 1973, and built the amphitheater. It now has a $1 million budget, with a company of about 50 actors and 20 crew members.

Ellen Geer has been artistic director since her father died, and has shaped its repertory to reflect the circumstances of the original troupe of actors who appeared here. The program is heavy on classics — Shakespeare, Molière — and Geer presents them in a way to assure their relevance to the time.

For “Julius Caesar,” she wrote in an opening narration to underscore the contemporary resonances.

“We’re here to witness the story of a country’s disintegration,” the narrator said, as the sunlight slowly faded and as the occasional bat fluttered across the stage. “A conspiracy among the wealthy senate is rising to protect the great democratic republic from a brewing dictatorship from Caesar. How does this happen to a thriving nation? Will you join me and become the citizens of Rome? If we don’t speak up, fellow citizens of Rome, we could lose our democracy!”

“The Last, Best Small Town,” by John Guerra, a homage to “Our Town,” is the story of a Latino family and a white family, neighbors in Fillmore, Calif., dealing with economic, class and racial strife during the subprime mortgage crisis that disrupted the nation’s housing market starting in 2007. “She really wanted to do that play,” Guerra, 33, said later about Ellen Geer. “It’s a good fit for the theater.”

The theater has adapted during the pandemic. It has two understudies for each role. The cast and crew are required to be vaccinated; an actor who played the changeling child in “Midsummer” was taken out of the cast because he was too young to be vaccinated. This is an everyone pitch-in kind operation: Actors in “Julius Caesar” arrived early to sweep the stage and set up the furniture; members of the cast of “Midsummer” were taking tickets and showing patrons to their seats.

Ellen Geer, who played Sunshine Doré in the 1971 dark-comedy death-and-romance classic “Harold and Maude,” just turned 80 and is no longer acting. She is preparing to retire soon as artistic director, handing over the job to Willow, who is 40. But even as she approaches the end of her career, she has strong feelings about the role of theater in the face of a pandemic.

“You know how many parks there are?” she asked. “You producers, get yourselves together go get a park. Just do it! Go into some rich person’s backyard. It’s no excuse to stop. It’s very important to do theater now.”