A woman says she was briefly removed from an American Airlines flight because her outfit was deemed inappropriate, a decision that provoked backlash online after she posted about it on Twitter.

Tisha Rowe, a 37-year-old family medicine physician based in Texas, was flying in from Kingston, Jamaica, to Miami on June 30 when she said a fight attendant said they needed to speak off the plane.

Rowe tweeted about what happened next.

Rowe told BuzzFeed News she and her 8-year-old son were guided outside the aircraft and asked if she had a jacket. Confused, Rowe replied, “No, I don’t.” After further questioning, the flight attendant made it clear that Rowe could not board the plane because her romper was too revealing.

“I felt powerless,” Rowe said. “There was nothing I could do in that moment other than give up my money and my seat to defend my position that I was completely appropriate.”

Grabbing a blanket that was provided by the crew, she covered up her waist and walked back to her seat feeling “humiliated.”

“To me, there was never an ounce of empathy, an ounce of apology, any attempt to maintain my dignity throughout the situation,” she said.

When she got home, Rowe posted about the incident to social media along with photos of the outfit shew as wearing, generating a lot of comments from users who believed Rowe was being “policed” on her curves. 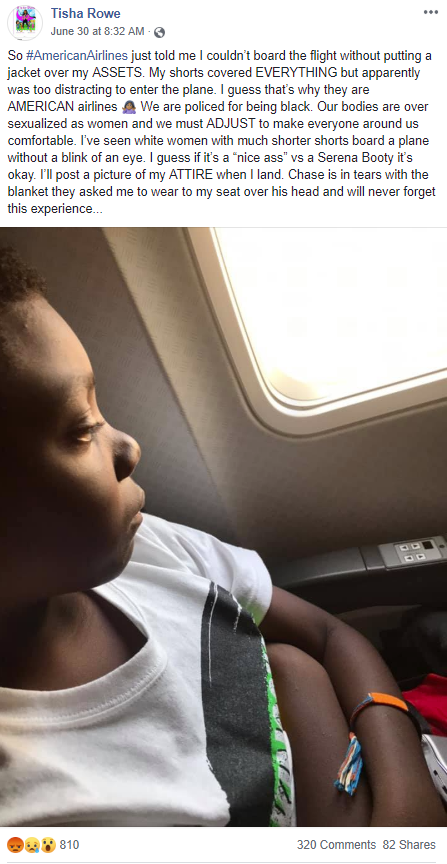 Rowe also believes that there was racial discrimination at play, adding that she was the only passenger to be stopped despite their being others wearing similar clothing.

“If I were a white woman, you would have not asked me to get off the plane,” Rowe said she told the flight attendant who pulled her to the side.

Shannon Gilson, director of public affairs communication for American Airlines, said in a statement that the company has tried to reach Rowe to “personally apologize” to her and her son for their experience.

“We were concerned about Dr. Rowe’s comments, and reached out to her and our team at the Kingston airport to gather more information about what occurred,” Gilson added. “We want to personally apologize to Dr. Rowe and her son for their experience, and have fully refunded their travel. We are proud to serve customers of all backgrounds and are committed to providing a positive, safe travel experience for everyone who flies with us.”

“Of course… Dr. Rowe, like the rest of the passengers, was flying from Kingston, Jamaica, to Miami, Florida, in June,” her attorney, Geoffrey Berg, told BuzzFeed News. “If American Airlines wanted passengers from Jamaica to Florida in June to wear snowsuits, that’s something they ought to put in their contract.”

American Airlines’ dress code policy has become more lenient in recent years, according to The Points Guy. In 2017, the airline dropped its list of forbidden clothing for “non-rev” passengers (passengers who are employees or related to employees), replacing it with a general guideline that clothing needed to be “neat and clean” and could not “offend or distract.” Before the change, passengers in first or business class could not wear shorts, beach footwear, jogging suits, or athletic gear.

But American Airlines has a checkered past when it comes to dealing with allegations of racial and gender discrimination.

In 2017, the National Association for the Advancement of Colored People issued a national travel advisory warning black travelers to “exercise caution, in that booking and boarding flights on American Airlines could subject them disrespectful, discriminatory or unsafe conditions.” The travel advisory was lifted in 2018 after the company adopted various internal changes that included implicit bias training and a new discrimination complaint resolution process.

In February, the Association of Professional Flight Attendants, the union that represents the majority of women flight attendants at American, accused the company of gender discrimination because of an attendance policy that disproportionately targets women employees while leaving mostly male pilots unscathed, according to NBC 5.

In a separate incident within the same month, the union had called for an investigation into a viral video that featured four American Airline flight attendants dancing and singing “Big Spender” to a man who was portraying an “Executive Platinum” customer, CBS News reported.

“This cannot be happening in today’s environment,” union president Lori Bassani said in a released statement.