A Woman Wore A "Hail Satan" T-Shirt On A Flight. The Crew Told Her To Change Or Get Off The Plane. 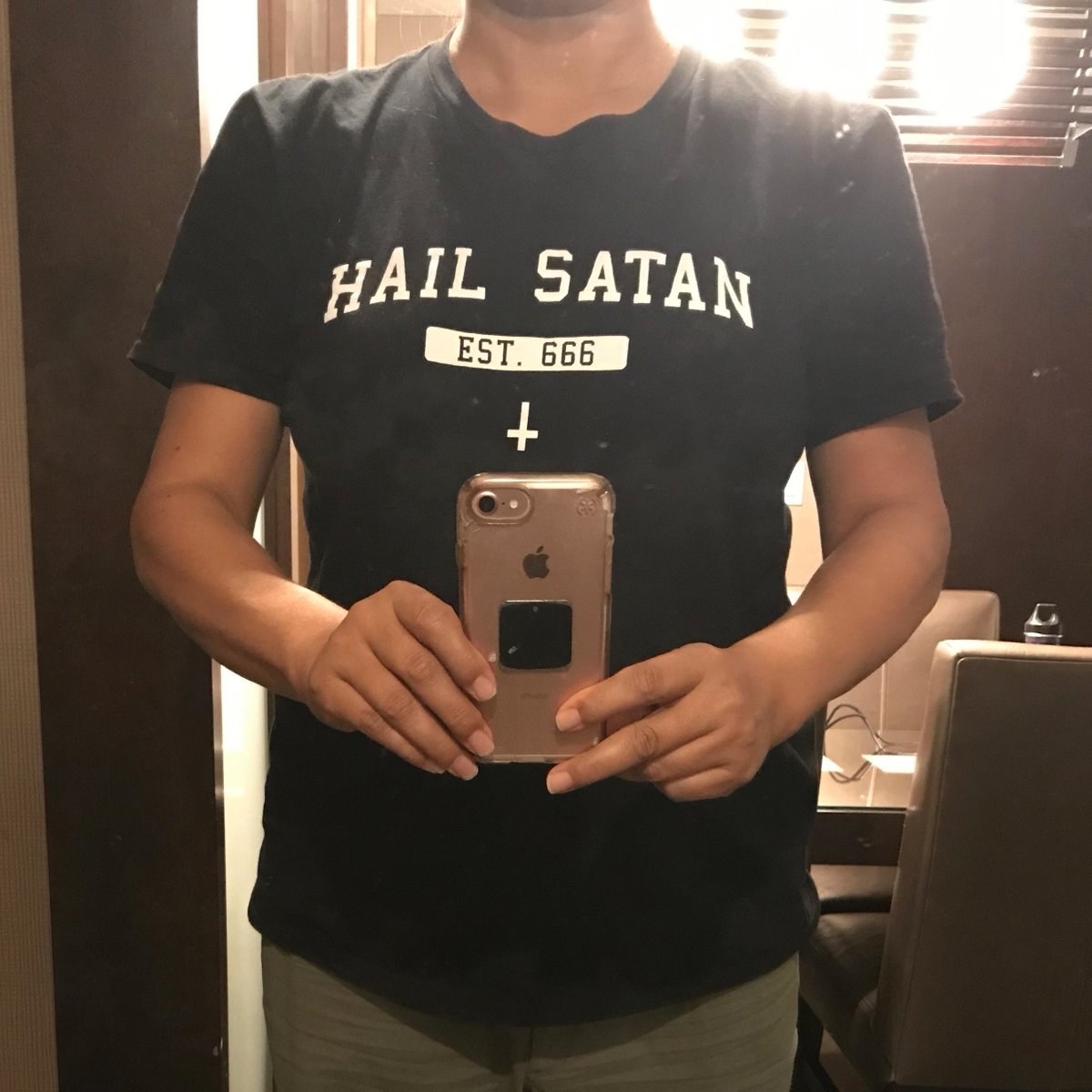 When an American Airlines crew member asked Swati Runi Goyal to get her things and follow him to the front of the plane during her Oct. 30 flight from Florida to Nevada, she thought she was getting upgraded to first class.

Instead, the 49-year-old Key West woman was told she had to either change her shirt or get kicked off the plane — all because the one she was wearing said “Hail Satan.”

No, Goyal is not actually a Satan worshipper. But she is a member of the Satanic Temple and bought the shirt to support the organization. Though it is a recognized church, the Satanic Temple is a non-theistic (and non-Satan-worshipping) religious organization. It’s become well-known for its activism on issues such as separation of church and state, free speech, and religious freedom.

“It’s an ironic shirt,” Goyal told BuzzFeed News. “People usually laugh at it, or they give me a thumbs up because they understand the meaning behind it.” 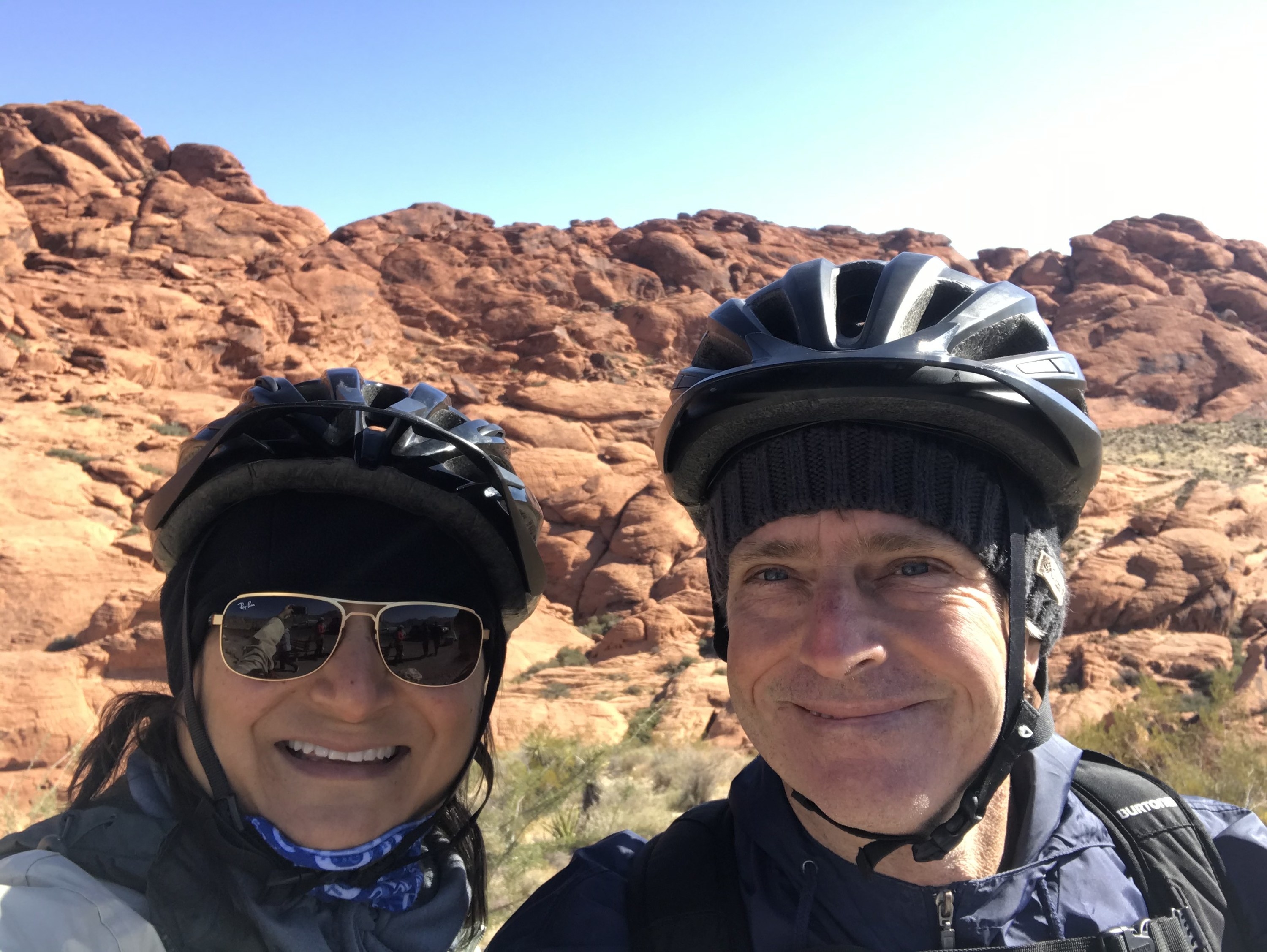 Goyal and her husband, Walter Price, on their Las Vegas trip after the incident.

On Oct. 30, Goyal and her husband were planning to fly from Key West, Florida, where they live, to Las Vegas. But the trip got off to a rough start when their first flight got rerouted through Miami.

After she’d gotten settled in her seat and was happily reading a copy of New York magazine, a crew member approached her and told her she had to change or get off the plane.

“He said, ‘Our crew has found your shirt to be offensive,’” said Goyal. “We initially just thought it was a joke. But he repeated the directive, and there was another female crew member who was behind him with her arms crossed looking very angry.”

Goyal and her husband refused to get off the plane.

“The man said, ‘Your shirt is offensive. Do you know what that means?’” Goyal said. “I said, ‘I’m a foreign-born minority woman, I understand ‘offensive,’ and this shirt is not offensive.’”

According to American Airlines’ website, passengers are required to “dress appropriately” and avoid “offensive clothing.” The rules do not specify any further about what would be deemed inappropriate or offensive, leaving it up to crew members’ discretion.

The crew members did not let up, delaying takeoff and bringing a customer service agent on board to reiterate that she could not fly in the “Hail Satan” shirt.

Goyal was shocked by the harsh response from the crew members, noting that she’s worn the T-shirt many times in the past without incident, including on airplanes.

Fortunately, her husband had two layers on, so he lent one to her. With the text of the shirt covered up, the crew allowed her to remain on the flight. Still, she said the crew avoided eye contact with her for the remainder of the flight, even ignoring her when the drink cart came around.

Goyal said she found the whole situation pretty absurd, and that she doubted anyone would have seriously believed her to be a Satan worshipper.

“I’m just an ordinary-looking person,” she said. “I’m not goth. I don’t have piercings. I wasn’t wearing a shirt that had a goat being beheaded on it.”

“[I was] wearing L.L.Bean hiking pants and vegan sneakers,” she added. “I mean, I couldn’t look like more of a nerd.”

Goyal said she was “humiliated,” but felt grateful that several other passengers were sympathetic, saying they were sorry for how she was treated and that they found her shirt funny.

What really concerns her is how the company’s vague and subjective rules about passenger clothing could be used against people belonging to religions more likely to be targeted on planes in a dangerous way.

“I think the group that could be most targeted by this are Muslim people, for obvious reasons,” she said. “I’m an atheist, but I support people’s rights to practice what they believe peacefully.”

The company did not initially apologize. A customer service rep emailed Goyal back, saying that they “have policies in place to ensure that no passengers are subjected to objectionable situations while on board.”

“Our flight attendants have a responsibility to all passengers in our care, and we must sometimes make difficult decisions associated with the application of our policies,” the rep replied in the email seen by BuzzFeed News.

Still, the rep added that a copy of her email had been forwarded to the vice president of flight service, adding that the airline’s “flight attendants will be reminded of the importance of courtesy and professionalism in the face of a sensitive situation.”

Goyal did not hear from the company again — until she tweeted about her experience on Friday.

“Discrimination has no place at American Airlines,” the company replied on Twitter, adding that it would investigate further and then reach back out to her.

Contacted by BuzzFeed News on Friday, American Airlines spokesperson Ross Feinstein expressed regret for how the situation was handled.

“We apologize to Ms. Goyal for her experience, and we are reaching out to her to understand what occurred,” Feinstein told BuzzFeed News.

In July, the airline briefly removed a woman from a flight because a crew member thought her romper was too revealing.

In September, two Muslim men said their flight was canceled after a flight attendant “did not feel comfortable” with them on the plane. A similar incident happened to two Muslim women flying American Airlines in 2016.

The airline has had so many bias incidents when dealing with black passengers that the NAACP issued a travel advisory in 2017, warning black travelers against flying American Airlines.