There wasn’t a kiss cam moment (perhaps because of COVID?), but superstar singer Adele and NBA agent Rich Paul were spotted sitting side by side at Game 5 of the NBA Finals on Saturday. The seatmates did not go unnoticed by the crowd, and an inside source went on record confirming their relationship status. 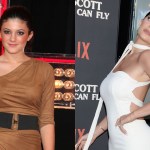 
The Most Dramatic Celebrity Transformations of the Past Decade

Adele, who is notoriously private compared to most celebs, showed up at the basketball tournament and sat down right next to Paul (see photos on Twitter here). While this could have meant nothing more than that that’s where VIPs sit, or that the two are friends, ESPN’s Brian Windhorst confirmed that they pair is dating on his podcast.

“Rich Paul, [LeBron James’] agent, brings his girlfriend to the game sitting next to LeBron. His girlfriend is Adele. Rich Paul is at the game with Adele,” Windhorst said. Per Page Six, he also added, “This is the first time they’ve come out in public together, so this will be all over the tabloids, especially in England tomorrow.”

Well, yeah, obvi! This is breaking news, sir. Now we have all sorts of questions: When did they meet and how? How serious is it? What do they like to do for fun together? Inquiring minds want to know! (For the record, neither Adele nor Paul have confirmed their relationship.)

Last fall, Adele was rumored to be dating British rapper and MC Skepta, but she shut down those dating rumors on Instagram after her Saturday Night Live appearance, saying “I’m going back to my cave now to be the (single) cat lady that I am!” Adele and Skepta were recently seen hanging out together at an outlet mall in California, so the two must just be good buddies.

Adele finalized her divorce from huband Simon Konecki in March, more than two years after they separated. They are the parents of an 8-year-old son named Angelo. For his part, Paul has three kids but has never been married.

Before you go, click here to see all the celebrity couples with the best stories behind how they met.