After Decades of Hints, Scooby-Doo’s Velma Is Depicted as a Lesbian

The character has long been seen as a lesbian icon. Some fans were thrilled that her sexuality was at last officially acknowledged. 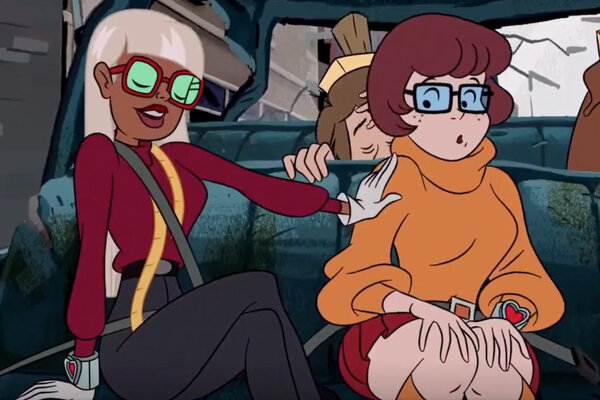 A new movie has put to rest decades of fan speculation and suggestions from previous stewards of the “Scooby-Doo” franchise by confirming that Velma Dinkley, the cerebral mystery solver with the ever-present orange turtleneck, is canonically a lesbian.

To many fans who had long presumed as much and treated her as a lesbian icon, it was not a shocking revelation. But her appearance in “Trick or Treat Scooby-Doo!,” which was released on Tuesday on several digital services, was the first time the long-running franchise openly acknowledged her sexuality, thrilling some fans who were disappointed that it took so long.

“Scooby-Doo,” created by Hanna-Barbera Productions, first appeared as a Saturday morning cartoon in 1969, and has been frequently reinvented in TV shows, films and comics. It generally follows a group of teenage sleuths, consisting of Velma, Daphne Blake, Fred Jones and Norville “Shaggy” Rogers, along with their mischievous Great Dane, Scooby-Doo.

Previous “Scooby-Doo” writers and producers have said that Velma was a lesbian, but said pushback by studios would not allow them to depict her as one on screen. The new movie, which was directed by Audie Harrison, leaves no doubt as to her sexuality.

In one scene of the newest iteration, a blushing Velma, voiced by Kate Micucci, is smitten at the sight of a new character, Coco Diablo, who mirrored Velma’s fashion sense with her own turtleneck and oversize glasses. In a later scene, she denies Coco is her type before admitting: “I’m crushing big time, Daphne. What do I do? What do I say?”