All The Mouthwatering Food You See In Movies? That’s Someone’s Job.

Melissa McSorley found herself researching which apple varieties existed in the 1960s, one of many specifics that made “Mad Men” so precise. Susan Spungen became a hand double for Meryl Streep, trussing a duck in “Julie & Julia” as if she were the one portraying the legendary Julia Child. Christine Tobin set off a hotel fire alarm at 4 a.m. while searing pork chops so Frances McDormand could gnaw on the bones in the HBO miniseries “Olive Kitteridge.”

Welcome to the wild world of food stylists.

Pay attention to the food in a movie and you’ll see a hundred niceties working in near-perfect harmony. Someone, or perhaps a few someones, was responsible for each of those decisions.

A profession that was once unique to advertising and magazine photography, the food stylist has become ubiquitous in Hollywood over the past few decades. The job varies from project to project, but it’s always multipronged. Food stylists are historians, planners, cooks, designers, sometimes coaches and always problem solvers. Because prop handlers used to be (and sometimes still are) responsible for anything edible on movie and television sets, many food stylists didn’t set out to work in showbiz. But now that it’s a fruitful, union-recognized position throughout the business, food budgets have boiled over. Cuisine on-screen looks more detailed and delectable than ever.

In the early days of cinema, “because film was black and white, the medium was much more forgiving,” Emily Ferry explained. “You could get away with a lot of stuff that you couldn’t get away with once film became color. And then our food became — as a nation, as a world — much more multiethnic and much more complicated. In the ’80s, when the food explosion in America happened, things got more specific.”

Ferry is a veteran prop master — the person responsible for all the stuff seen in any given frame — whose first credit was the 1975 comedy “Sixpack Annie.” She says she’s worked with food more and more frequently over the years, including on movies such as “Ed Wood,” “How the Grinch Stole Christmas” and “Memoirs of a Geisha.” Like with any full-time food stylist or prop master, sometimes that work is front and center, à la the memorable chocolate cake scene in “Matilda,” which took roughly three weeks to shoot and required approximately 20 cakes. (It didn’t help that Jimmy Karz, the young actor playing Bruce Bogtrotter, disliked chocolate.) Other times, it’s more like ornamentation, one of many meticulous but barely noticed aesthetic touches. 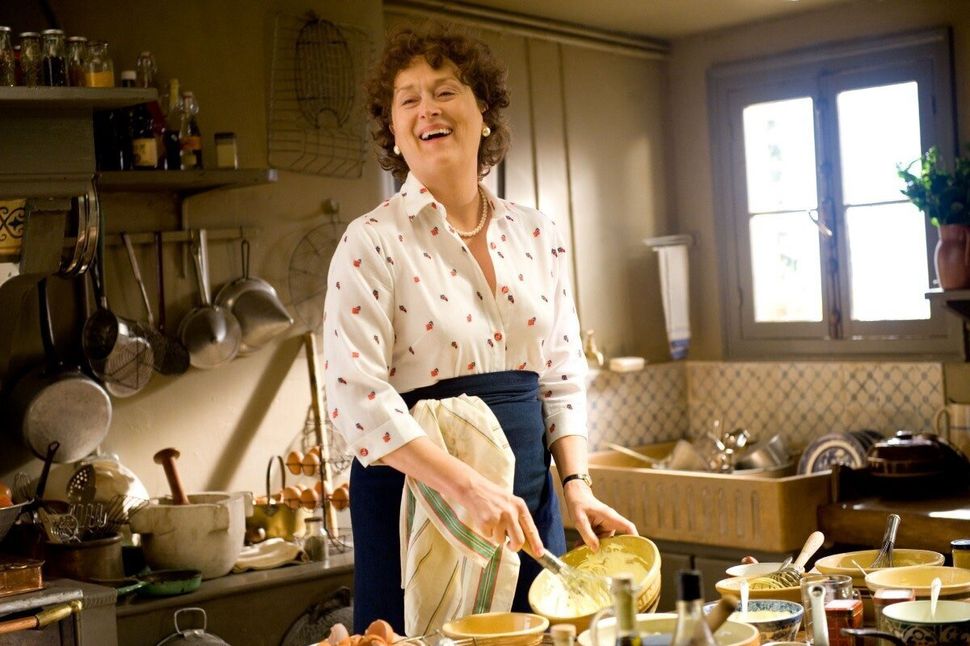 “I could tell you all of the things I made for ‘Mad Men’ that you never individually saw, but they were there in the background as a character, as a set piece, taking you to the ’60s,” McSorley said. “And the dishware was [period-appropriate]. Just everything.”

Beyond technological progress, the reasons that food now assumes outsize importance in film and TV are manifold. I talked to a handful of stylists over the past few months, and many echoed Ferry’s assessment. The proliferation of America’s culinary culture, they say, has spilled over to popular art — even art that’s set in the past.

The launch of the Food Network in 1993 was a key development. The channel popularized the celebrity chef at the same time that Martha Stewart Living, Saveur and other publications were prioritizing sophisticated food imagery. (Spungen, a former Martha Stewart editor, went on to style “Julie & Julia,” “It’s Complicated” and “Eat Pray Love” after friend and food writer Amanda Hesser recommended her to director Nora Ephron.) In the 2000s, the reality-TV boom gave us “Top Chef,” “Hell’s Kitchen,” “Man v. Food” and Anthony Bourdain’s globe-trotting docuseries “No Reservations.” Through websites like Epicurious and Food52, the internet made cooking more egalitarian. Meanwhile, a dietary fad or savory trend seemed to permeate the hoi polloi every other week. By the time the 2010s brought about glossy confections like “The Great British Bake-Off” and “Chef’s Table,” food was more than a source of sustenance — it was a multibillion-dollar lifestyle commodity.

Food is also an inherent marker of identity. Many movies and shows made since the ’80s possess a keen understanding that the cuisine we share reflects who we are as people. The central conflict in “Do the Right Thing” revolves around a neighborhood pizzeria. Following lavish feasts in “Eat Drink Man Woman,” characters clean while gossiping about their family. “Waitress” finds triumph when a small-town woman trapped in an abusive marriage commercializes her pie-baking talents. The most suspenseful scene in “Parasite” hinges on the preparation of a dish nicknamed “ram-don,” meant to be an affordable comfort until the film’s wealthy matriarch demands premium steak in it. Even Hannibal Lecter, a noted cannibal, garnishes his meals with “fava beans and a nice Chianti.” 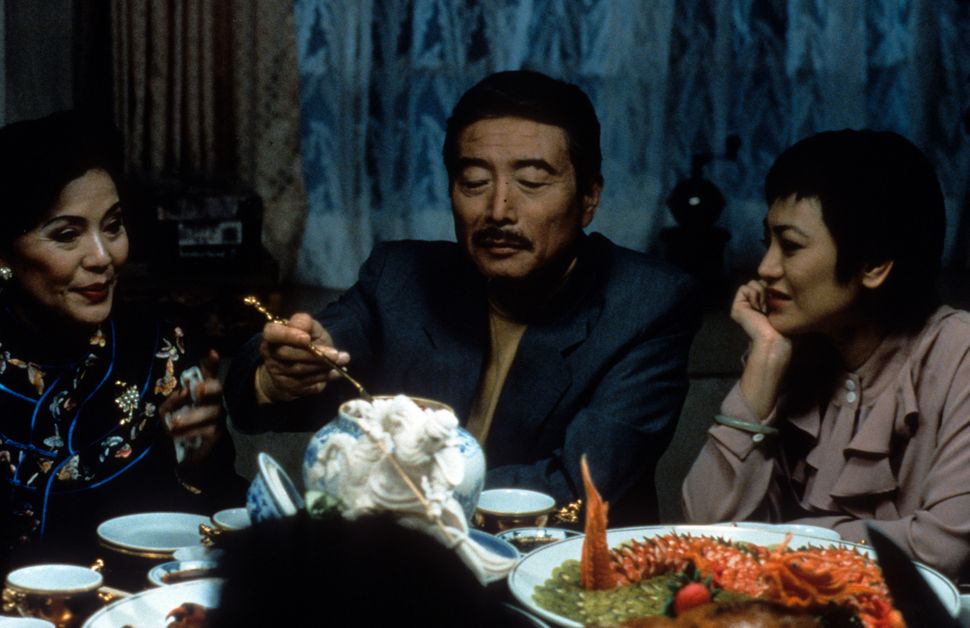 As we became more food-obsessed, so did pop culture, leading to the rise of the food stylist. Dedicated stylists mean heftier, more intricate food allocations, according to Nancy Goodman Iland, whose credits include “The Good Place” and “Straight Outta Compton.” She estimates that the cuisine on a food-heavy movie like 2014’s “Chef,” which she worked on, runs between $20,000 and $30,000, a figure that includes her pay. Christine Tobin said one of her “greatest achievements” was a $20,000 banquet scene in “American Hustle,” replete with cooked-lobster displays, that didn’t even make the final cut. Compare that to the “several thousand dollars” that Valerie Aikman-Smith was allotted for the entirety of 1997’s “Titanic,” including the real caviar that James Cameron requested for the dinner scene where Leonardo DiCaprio learns how to dine like the rich.

“Basically, your job is to plan a menu for every week” of production, said Richard Papier, a chef who lucked into employment on “21 Jump Street,” “12 Years a Slave” and “Lee Daniels’ The Butler” when he returned to New Orleans a few years after Hurricane Katrina. Papier and his counterparts comb through a script to see which scenes require victuals. Then they figure out how to accommodate actors’ individual food restrictions, research and shop for the necessary items (or send assistants to do the shopping, if budgets permit), prepare them so they photograph well on camera, and help finesse those scenes during the shoot, including refreshing food for retakes.

Some stylists ensure the food is as delicious as anything they would assemble for, say, a catered event. When Tobin made beef stew for the nautical disaster thriller “The Finest Hours,” Chris Pine asked to keep leftovers in his trailer because it reminded him of his mother’s cooking. Other stylists focus only on making food functional. “They’re not looking for four-star dining,” Papier said. “It’s called acting for a reason.”

Often they are also teachers. The average project doesn’t require stylists to liaise directly with actors, but for food-intensive moments, they might find themselves training a performer to execute a recipe in real time. On the “Spanglish” DVD, a behind-the-scenes featurette (available on YouTube) documented celebrated California chef Thomas Keller teaching Adam Sandler to make a fancy BLT. Similarly, Tobin gave Josh Brolin a pie tutorial before he shot “Labor Day” with Kate Winslet. And Goodman Iland stepped in front of the camera in “A Star Is Born” so she and her team could add authenticity to the restaurant where Lady Gaga’s character works.

Despite bigger budgets and better respect within the industry, many food stylists, who are effectively freelancers hired at union-appointed salaries, still maintain ancillary business to supplement their income.

“If I wasn’t this far along in my career and working on so many shows that I am, I don’t know if I’d be able to make it,” said Goodman Iland, who started in the “Golden Girls” script department and began food-styling during the last four seasons of “Murder, She Wrote.”

“It’s always been 12-hour days for TV shows,” Goodman Iland said. “Commercials are more like 10-hour days. And movies, they’re all over the place. I would always have to be up an hour earlier, because I load my car with all the equipment, the ovens and the hot plates and everything that does not need to be refrigerated. And then I give myself 20 minutes to half an hour just to unload the food, if there’s a lot of it. And I’m always there an hour afterwards, depending where we’re at location-wise and whether we have access to sinks and a cleaning facility. So for me, it ends up being two hours longer. But you know what? I love my job so much that it doesn’t really bother me.”