An Intimate Dinner Party in Harlem

The visual artists Naima Green and Sable Elyse Smith planned a gathering at their Manhattan home with guests who put them at ease — and who weren’t allowed to lift a finger.

Naima Green: I’m recovering from surgery, so when [Sable and I were] planning this dinner party, we really thought about the people we could be at ease with — folks I wouldn’t feel guilty sitting down around. These are homies we’ve known for eight to 10 years, but this was the first time the six of us were in the same intimate space.

We spent a good amount of time unpacking what each of us wants in terms of romance, friendships, partnerships and the challenges that come with that — how we hold ourselves accountable to our needs, how we set boundaries, what we compromise on and what we don’t. When everyone was going around talking about their relationships, they were going to skip [me and Sable] and I was like, “Hey, we have news, too.” Our friends know that we’re getting married next year, but we actually eloped in September. It was nice to share that.

My new dinner party approach is to create the best container you can and then just be comfortable with it taking the form it needs to take. A previous version of me would try to make sure everything was organized. Now I’m like, “Listen, we cleaned the house, we have food. Come over and have a good time.”

Sable Elyse Smith: Dinner parties are some of the most important rituals in my life. It’s a moment to pamper people. I don’t let anybody clean up [afterward], even if it’s madness. And it was madness. Our dishwasher was broken, we just got a puppy and I had a studio visit earlier in the day. But I still made sure my guests didn’t lift a finger. That’s the rule. 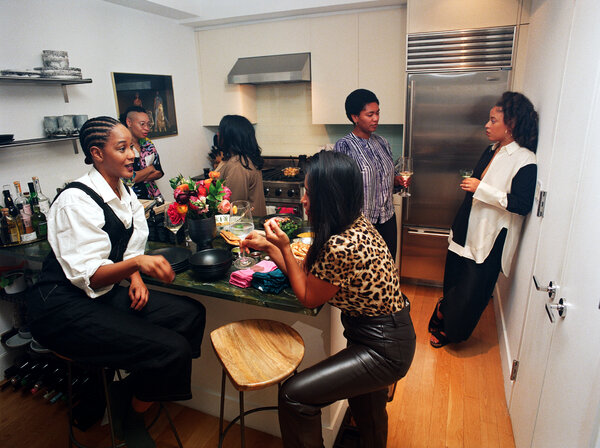 The attendees: Naima Green, 32, and Sable Elyse Smith, 36, were joined at their Harlem home by four of their closest friends — the artist Salome Asega, 33; the curator Oluremi C. Onabanjo, age withheld; the writer Jessica Lynne, 33; and the poet Ica Sadagat, 35. The beauty of their shared friendships comes from the intensity with which they “ride for each other,” says Green, often traveling long distances to support one another’s shows and exhibitions.

The food: Green and Smith ordered takeout from Sona, an Indian restaurant in the Flatiron district. Green is vegetarian, so there were dosas filled with turmeric potatoes, roasted Japanese sweet potatoes and yellow daal, as well as spicy popcorn shrimp, lamb biryani and Punjabi-style grilled chicken. Smith made a side salad that ended up being a running joke: “No one touched it,” she says, even as Lynne insisted the group is “too old not to be eating our greens.”

The conversation: “Loophole of Retreat,” the American artist Simone Leigh’s three-day symposium on the intellectual and creative labor of Black women, which took place during the 2022 Venice Biennale, was a hot topic. “We talked about how Simone’s practice relates to all of us,” says Green, “and what it means to create a space of care for folks.”

Interviews have been edited and condensed.