Ariana Grande Has Out Of Body Experience With Diane Keaton

Diane Keaton professed her love for Ariana Grande by wondering aloud on Instagram if the pop star would do a duet with her, and we’re pretty sure the answer is a yes.

The actor posted a video on her Instagram Wednesday that served as an ode to the “7 Rings” singer. Alongside images of Grande, Keaton is heard narrating the video, where she calls Grande “just amazing.”

“Once in my life, just once in my stupid life, I want to sing along with the amazing Ariana Grande so here I go,” says Keaton, before proceeding to sing along to Grande’s “thank u, next.”

She concluded her performance by saying: “Ariana Grande is a genius and I’m an idiot but so what, it was a lot of fun.” Keaton also captioned the post by saying: “I LOVE ARIANA GRANDE! DO YOU THINK SHE WOULD WANT TO SING A DUET WITH ME? @arianagrande #thankyounext #sing #itriedmybest.”

Not missing a beat, Grande replied to the video in the comments twice and remarked that she was “having an out of body experience” and told Keaton “!!!! love you SO MUCH.” 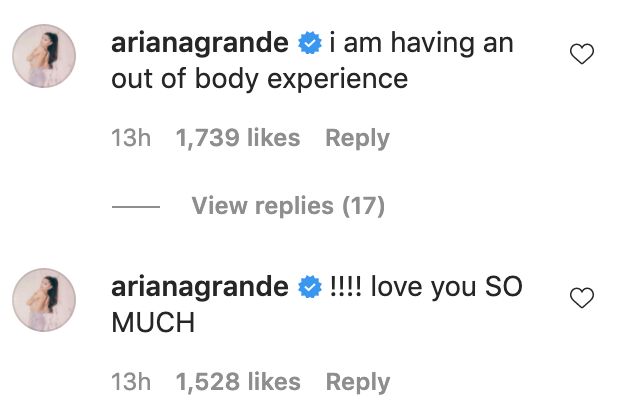 Grande has been a longtime fan of Keaton and even used Keaton’s 1996 film “The First Wives Club” as inspiration for a performance of “thank u, next” on Ellen DeGeneres’ show in 2018.

In the performance, the stage, choreography and theme were an homage to the scene in the film where Bette Midler, Goldie Hawn and Keaton sing “You Don’t Own Me” together. The film follows the three women as they attempt to get revenge on their husbands after they were left for younger women.

Grande even shared a cheeky series of images from the film with the lyrics to “thank u, next” on Twitter at the time.

The duo also joined forces in an interview for Interview magazine earlier this year. Grande asked Keaton about her “favorite line or scene” form “The First Wives Club” and Keaton confirmed it was the scene where she sang “You Don’t Own Me.”

Grande followed up that question by asking: “How does it feel to be so fucking iconic?”

Keaton replied that she didn’t “exactly understand what that means but it’s very kind of you to say.”

“Can you explain to me how I’m iconic? What is that? I understand certain aspects of it, but it’s hard for me to deal with that. I don’t really see it that way. I live with myself and I’m hardly iconic,” she said. “I get up in the morning and it’s me again. I’m just another person saying, ‘Gee, I’d better feed the dog.’”