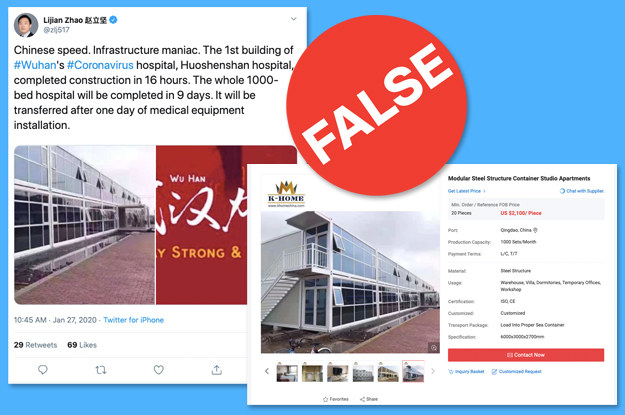 Chinese state media and a government official spread a false image they claimed showed a newly-constructed hospital building in Wuhan, the epicenter of the Coronavirus outbreak. The image actually shows a modular apartment building in China, and was taken from an online listing.

The out-of-context photo was shared in a tweet and article from Global Times, a state media outlet, and was tweeted by Lijian Zhao, deputy director general of the information department in the Chinese Ministry of Foreign Affairs.

The false image was spread after videos showing the rapid construction of a new hospital in Wuhan went viral across social media networks. Bloomberg reported that China was planning to build a hospital in a week in the coronavirus-stricken city. The hospital would reportedly have 1,500 beds. 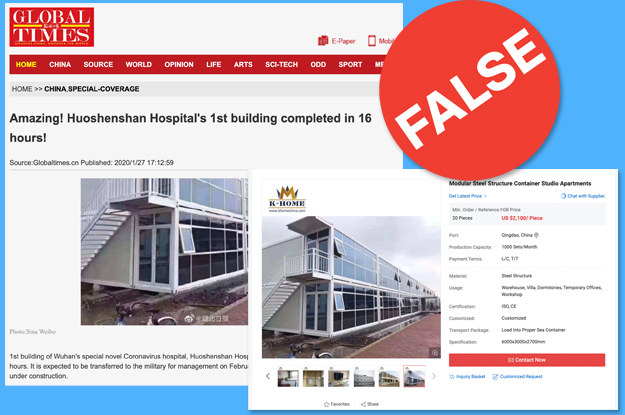 The tweets by Global Times and Zhao claimed to be the first look at the first building of Huoshenshan hospital. The Global Times article featuring the false image attributed the photo to Chinese social media platform Weibo. Zhao has spread disinformation in the past and is known for his anti-US trolling.

Coronavirus disinformation has spread online since news of the virus broke. Much of it includes baseless conspiracy theories, unverified video, and false numbers of confirmed infections.