‘Dickinson’ Is an Offbeat Literary Origin Story, Written in Fire

In 2019 the new streaming service Apple TV+ released a trailer for “Dickinson,” which framed the story of the enigmatic 19th-century American poet as a contemporary young-adult melodrama, complete with power ballad soundtrack and conspicuous employment of the honorific “Dude.” The series looked ridiculous. Naturally, I had to watch it.

In the first season, Emily Dickinson (Hailee Steinfeld) hitches a coach ride with Death (played by the rapper Wiz Khalifa), curses out a pompous Henry David Thoreau (John Mulaney) and dances with a hallucination of a giant bee (Jason Mantzoukas) while high on opium. Yep, I realized, this is ridiculous. Ridiculously brilliant.

Apple TV+’s first great series, created by Alena Smith, has the challenge of many a high school English teacher: to try to convince a new generation that a name from staid American Lit syllabuses was a fleshly person, with passions as urgent as our own, living in an unruly time of cultural ferment and political upheaval.

This kind of effort inevitably risks making you sound like the instructor pulling up a chair backward and telling the kids, “Let’s rap.” But Smith and company produced a work that, like poetry itself, risks risibility to produce something dazzling — a literary superheroine’s origin story that’s heady, funny and full-feeling, dead serious about its subject yet unserious about itself.

“Dickinson” introduces the budding poet in her twenties — a Millennial from another millennium — drunk on words and chafing against a bourgeois Amherst family that doesn’t know what to do with her. She’s smitten with Death (“He’s such a gentleman. Sexy as hell”) and with her brother’s fiancée, Sue (Ella Hunt), to whom the poet wrote devotedly in real life.

The series drops you into a version of the 1850s so deliberately anachronistic in tone that you might expect someone to whip an iPhone out of the folds of her gown. Hip-hop bumps on the soundtrack; characters binge “Bleak House” as if it were a Netflix serial. (“I’m such an Esther!” says Emily’s sister, Lavinia, played by Anna Baryshnikov.)

It all teeters on the edge of “Drunk History” self-parody. (The casting of Jane Krakowski as Emily’s mother briefly makes “Dickinson” seem like something her character Jenna Maroney would have starred in as a cutaway joke on “30 Rock.”)

But it works, thanks to an exuberant voice, the playfulness of the half-hour episodes and the passion for the protagonist’s verses, which appear onscreen as if written in fire. Steinfeld plays Emily as a snarky rebel possessed by forces she only partly understands; it’s literary biography in the form of a WB supernatural dramedy.

Over the first season, the poet marshals her powers and learns about the challenges for women in the 19th-century literary world through a series of encounters, including a Christmas dinner with the ambitious Louisa May Alcott (Zosia Mamet), who trash-talks Nathaniel Hawthorne, loves to run (“That’s an actual fact about me”) and brainstorms the plot for “Little Women,” looking for a page-turner to “rake in that cash.”

Season 2, whose first three episodes arrive Friday, wrestles more directly with the real-life mystery at the heart of the show. The real Emily Dickinson, as a prologue to the pilot tells us, published only a few poems and spent much of her late life alone in her room. Why would a brilliant, driven poet resist fame? 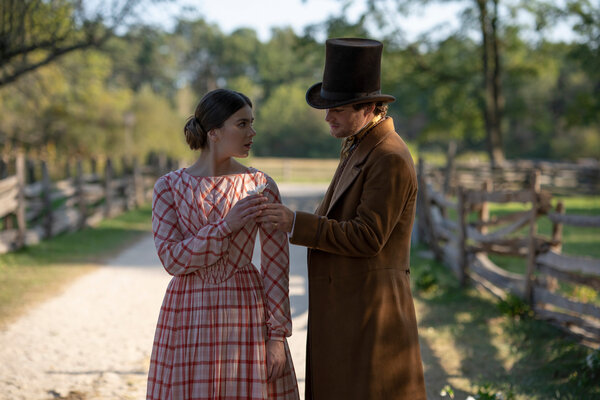 The newspaper also transforms the idea of literary fame; one run of the presses and your words are in front of thousands. Its cocky, sleazy-genteel editor, Samuel Holmes (Finn Jones), takes an interest in publishing Emily’s work.

To viewers of the influencer generation, for whom attention is an assumed good, that this did not end in a happy-ever-after of literary celebrity suggests that something must have gone wrong — Emily must have been held back.

And yes, she still has to deal with the likes of an ophthalmologist she visits for eye strain (James Urbaniak), who laughs when she tells him she’s a writer: “You might want to stop doing so much of that!” (On the other hand, her lawyer-politician father, an enjoyably stuffy Toby Huss, gradually comes to appreciate, if not understand, his daughter’s word addiction.)

But the season suggests that Emily’s retreat was also an inside job. She begins to see visions of a ghostly young man, who introduces himself as “Nobody,” the embodiment of perhaps her most famous poem, a rejection of publicity. “Fame is not genuine,” he says. “It will use you. It will destroy you.”

Is she hearing her own voice here, or the outside world’s? All those em dashes in her verses — do they represent a breathless rush to be heard? — or a longing for the silences that fall between words? Emily seems to grow more self-doubting as a person even as she grows more confident as an artist; the doubt, “Dickinson” suggests, may be inseparable from her art.

The running device of the Nobody apparition makes Season 2, while still raucously funny, a more serious and spooky outing. So does the advance of real-life history, as the Civil War looms closer.

Emily’s poetry feels increasingly séance-like, as if her intense images (all those split larks and looks of agony) were tapping into feral forces that will soon be loosed on the country. The season also uses the approach of the war to build up its abolitionist Black characters, though their stories still feel peripheral among the show’s privileged white New Englanders.

Viewers and scholars can, of course, argue about the accuracy of “Dickinson.” (Let’s assume the giant bee is fictional.) But I’m more interested in its ideas of history, of freedom, of creativity as a wild gift and a kind of drug. Beyond that, as “Dickinson” itself says in the opening to Season 2, there is little hard documentation from this period in the poet’s life.

All of which frees this show to take poetic license — to tell its version of the truth, but to tell it weirdly, delightfully slant.

END_OF_DOCUMENT_TOKEN_TO_BE_REPLACED

END_OF_DOCUMENT_TOKEN_TO_BE_REPLACED
We and our partners use cookies on this site to improve our service, perform analytics, personalize advertising, measure advertising performance, and remember website preferences.Ok