Eat Up! Drama is Served at These Family Dinners

The stage loves a dining room table. This single piece of furniture represents sustenance and communion, and domestic dramas set at the table are — pun very much intended — the bread and butter of theater.

But for all the ways family plays reveal truths, trauma and traditions, they take on greater weight as I think about them this Thanksgiving, during a pandemic demanding all of us to figure out whether we can safely see our loved ones, and if so, how.

That’s not to say that family get-togethers onstage tend to go well. Tracy Letts’s Pulitzer Prize-winning “August: Osage County” is the contemporary standard-bearer for all hostile family dramas. We join the Westons, a trash fire of a family racked with bitterness, guilt and resentment, in their Oklahoma home on the occasion of the absence, then death, of the patriarch, Beverly Weston.

Fed up with the family’s cruelty, Ivy, the middle daughter, declares to her elder sister: “I can’t perpetuate these myths of family or sisterhood anymore. We’re all just people, some of us accidentally connected by genetics, a random selection of cells. Nothing more.”

Not exactly an episode of “Full House.” But she (and the play) are right that the myth of family often wilts before the real deal. The Westons twist their intimate knowledge of one another to degrade, intimidate and manipulate. Be careful what you’re wishing for this holiday season: “August: Osage County” shows us that a family around a dinner table can be a battlefield — but here the wounds are personal.

The same is true of Stephen Karam’s fantastically brutal (and simply fantastic) “The Humans,” in which the Blake family, natives of Scranton, Pa., convene at the Manhattan duplex apartment of their younger daughter Brigid and her boyfriend Richard. Erik, Brigid’s father, is remote, supposedly because he hasn’t been sleeping well, and her mother, Deirdre, tries to connect with her daughters but is often dismissed. Amy, the older daughter, is ill. And Momo, Erik’s aged mother, is barely lucid.

“The Humans” debuted Off Broadway in 2015 and went on to win the Tony Award for best play when it moved to Broadway. I saw a virtual production this fall courtesy of the Olney Theater Center, and found the limitations of the form to be surprisingly effective. 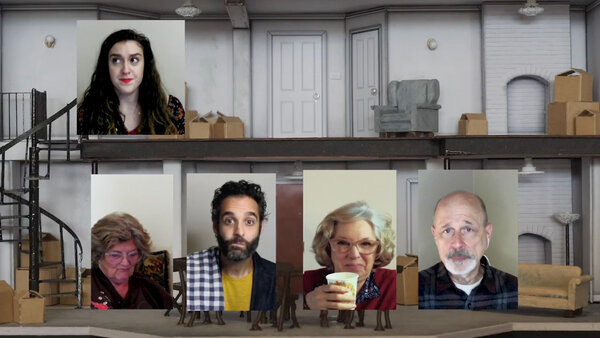 While dinner with the Blakes is full of passive-aggressiveness, outright insults and secrets, “The Humans” more subtly emphasizes divisions in the family, the way individuals move from room to room, level to level, never quite seeing eye to eye, despite the fact that they’re together.

Accommodating to the pandemic circumstances — each actor in his or her own Zoom window, superimposed over a model of what would have been the in-person set — the Olney’s production underscores the movement between congregation and separation, amplifying the sense of emotional distance among the members of the family.

One of my favorite recent family dramas — Zora Howard’s stunning “Stew” — isn’t set at the dining room table at all. This four-character play, a Page 73 production that I saw early in the year, is set around the kitchen table, a space where food is labored over and recipes are passed down.

In depicting three generations of Black women repeatedly preparing the dish of the title, the play makes clear how the domestic space can be a place of comfort and nourishment.

This is set against the troublingly repetitive patterns in their lives: The men are all absent, and each woman seems doomed to the same fate of an early pregnancy and a challenging life as a single Black mother.

When a family congregates at a table, the past never remains the past, but sidles up to the present. As with the cooking in “Stew,” we find cycles and repetition in the shuffling of chairs, the recounting of old stories, the echoes across generations.

Thornton Wilder’s one-act “The Long Christmas Dinner,” from 1931, is set in the dining room of the Bayard family home. Time passes discreetly, from one holiday dinner to the next, and characters enter from the wings, pass through, and exit, signifying the string of births and deaths that mark a life.

But Wilder takes this even further, showing how the family table is often where history repeats itself. As the generations progress in “Christmas Dinner,” the Bayards take the very seats of their predecessors, often repeating the very same sentiments. It’s a conceit that has been since borrowed by others, and speaks to a longstanding fear: How many times have you said, with whatever measure of humor or dread, that you’ve turned into your parents?

There is something holy to this, too. Wilder’s table marks a rite, like a sacrament, where a congregation of people figuratively and literally break bread. Reading the play recently, in light of surging Covid-19 cases and the seemingly endless deaths we’ve faced in 2020, I found its reflections on mortality darker than even the playwright may have intended. How many of our holiday dinner tables will have seats left empty for those absent, or passed?

For others, this holiday will mean virtual gathering or no celebration at all. Those obstacles have already reached the Apples, Richard Nelson’s imagined Rhinebeck, N.Y., family, who in a series of four plays first presented at the Public Theater, meet for meals and chat in real time (with food sometimes cooking as we watch).

“What Do We Need to Talk About?,” the first in a recent follow-up trilogy created for a virtual medium, proves that there need not be a physical table for telling exchanges to ring true.

Separated by the pandemic, the Apples now share a meal via Zoom, and though we can’t see every dimension of their interaction — the way they sit, where they sit, how they eat, how they move around each other — the interruptions and gaps in their conversations still have weight. So do the ways they talk about eating, and the stories they tell.

The Apple Family Plays have often felt trapped by the bubble of privilege in which the central white family lives. But the pandemic may have granted them a new heft, depicting a family meeting at a family table that no longer exists. Aspects of the ceremony of gathering and cooking and eating and cleaning up are stripped away, leaving only individuals and what they have to say to one another.

It’s a frightening place to be. And, yes, I say frightening, even in the context of a family that (unlike the Westons) is generally pleasant, well-adjusted and loving. To be with one’s family is to look at one’s past, present and future at the same time — to reckon with where you’ve come from and where you’d like to go.

For safety reasons, many of us will forego such gatherings this year, and for some there may be a relief in that. But despite the complaints and the car rides and the expensive airfare, many of us still find ourselves back at the table every year. And the table will be there whenever we can get back.