Prince Harry’s memoir, Spare, hasn’t even been released yet, but it’s already drawing lots of attention — particularly to his sex life. There is reportedly a section where he talks about losing his virginity as a teen, and that’s where Elizabeth Hurley came into the conversation.

The book comes out on Jan. 10, 2023, and even though no experts have been released, Saturday Times magazine is claiming that the Duke of Sussex talks about losing his virginity to an anonymous “beautiful older woman in the countryside.” That, of course, led to an internet guessing game of who this stunning person could be — enter Hurley. She was pressed about the topic in the interview, and she responded with a resounding, “Not me. Not guilty. Ha!” Of course, that wasn’t enough for writer Michel Odell, who thought she sounded guilty. The 57-year-old actress firmly said, “No. Not me. Absolutely not.”

Internet detectives started pointing fingers at Hurley because she once owned a home in Gloucestershire, an area where King Charles III and Princess Anne also have property. It puts her near the royal family just by real estate ownership, but there really isn’t any other clue that associates Hurley together with Prince Harry during that time.

It’s doubtful we will ever know the answer (it’s also nobody’s business), but fans will still have to wait and see if this story is even in the memoir in the first place. It’s nothing but a rumor, but Hurley has officially exited the conversation.

Before you go, click here to see everyone Prince Harry dated before meeting Meghan Markle. 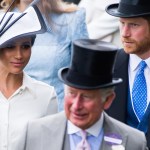