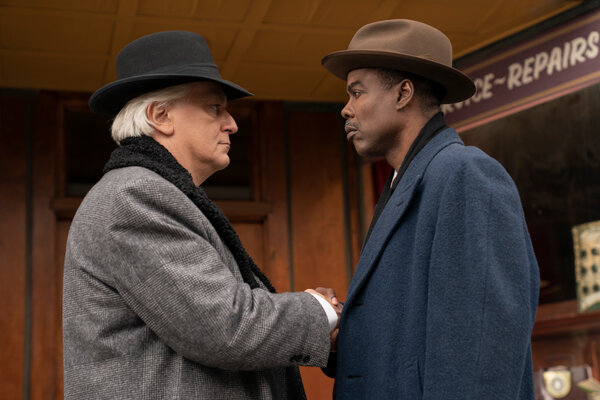 Season 4, Episodes 1 and 2: ‘Welcome to the Alternate Economy’ and ‘The Land of Taking and Killing’

“If America is a nation of immigrants, how does one become American?”

Every essay needs a thesis, and in the first episode of the fourth season of “Fargo,” Ethelrida Pearl Smutney (Emyri Crutchfield), our guide to the combustible underworld of 1950 Kansas City, provides one. She also provides a definition of “assimilation” from Webster’s dictionary, which perhaps takes the school-report nature of the voice-over narration too far. But Ethelrida’s words are helpful as an organizing principle for this series’s typically dense thicket of criminal intrigue, because it’s too easy to get snagged in the details. This will be a season about the tribalist lumps that float around the great American melting pot.

It also appears to be the “Miller’s Crossing” season of Noah Hawley’s continuing homage to the Coen Brothers, even though it takes place a few decades after that Prohibition-era gangster noir. Where “Miller’s Crossing” is about the conflict between the Irish and Italian mobs in an unnamed U.S. city, Hawley moves past the point when the Italians have emerged victorious and settles on a threat to their power, which comes in the form of a Black crime syndicate.

While these new insurgents, called the Cannon Limited and led by Loy Cannon (Chris Rock), carry specific racial burdens with them, the period sheen of the setting is pure Coens, starting with the hardwood at Joplin’s Department Store.

Hawley treats this arena like an underworld Ellis Island, a place where immigrants are processed before they’re granted the legitimacy of being fully American. In the “alternate economy,” a pattern emerges where deals between tribes are struck and inevitably violated, and where, in the words of Winston Churchill — also quoted by Ethelrida — “History is written by the victors.” Hawley doesn’t go back as far as the deals struck between Native Americans and settlers, but it’s easy to extrapolate from the conflicts he breezes through in the opening section between Hebrews and Irishmen; Irishmen and Italians; and, finally, the Italians and Black migrants at the center of this season.

The first two episodes, which aired back-to-back on Sunday, draw these battle lines starkly, but they also suggest key areas where ethnic and racial barriers are crossed, with all the promise and danger that goes along with it. Ethelrida faces those barriers every day at home, where her parents, Thurman (Andrew Bird) and Dibrell (Anji White), are a mixed-race couple running a mortuary. Elsewhere, an exchange of sons between mob bosses is offered like a collateral in a deal — more binding, certainly, than a spit-shake — but it’s more like a test of loyalty. Will the boys choose their own kind or respond to the nurturing of another tribe? The identity of a nation is at stake.

In 1950, the power-sharing arrangement between the Fadda Family and the Cannon Limited threatens to come apart at the seams, especially after the head of the Faddas is struck in the neck by a pellet from a child’s air rifle. As in the Coens’s “Fargo,” one incident of violence spiderwebs out into a much larger and bloodier set of circumstances. A dispute between Loy and the elder Fadda over control of a slaughterhouse cannot be resolved after Fadda’s death, which leads the Cannons to challenge Josto Fadda (Jason Schwartzman) and the temperamental Gaetano Fadda (Salvatore Esposito) by making a move on it. New terms will have to be negotiated on the fly — and at the barrel of a gun.

The wild card in this entire scenario is Nurse Oraetta Mayflower, a pulp villain played by Jessie Buckley, who was terrific as a Glaswegian country singer in “Wild Rose” and as the troubled protagonist of Charlie Kaufman’s Netflix movie “I’m Thinking of Ending Things.” While the Faddas have invited trouble by executing a drive-by shooting at the private hospital that refused service to the big boss, they miss when Nurse Mayflower quietly snuffs him out. Her motives are a question mark, but she’s a wonderful agent of chaos, comparable to Billy Bob Thornton’s Lorne Malvo on the show’s first season but disinclined to live in the shadows. She’s also our one connection to “Fargo” country, Minnesota Nice turned lethal.

The second episode adds a few more key characters to the ensemble, including an opening in which two women, Swanee Capps (Amber Midthunder) and Zelmare Roulette (Karen Aldridge), escape from the clink like John Goodman and William Forsythe in the Coens’s “Raising Arizona.” Zelmare is Ethelrida’s aunt, and while she’s not greeted warmly by her mother, it’s never the worst thing to have wily convicts around while leg-breaking loan sharks are losing their patience. In a season already teeming with eccentrics, the addition of Odis Weff (Jack Huston), a cop with O.C.D., feels a bit like a hat on a hat, but his compromising relationship to the Italians is also of a piece with “Miller’s Crossing,” in which the top mob boss always has the police at his disposal.

The title of the second episode is spoken by Gaetano, the Faddas’s brutal new enforcer from Italy: “In the land of taking and killing, Gaetano is king.” What kind of land America is — and who controls it and how — will be a central question on “Fargo” this season. And a lot of blood will be spilled to answer it.

A few other Coen callbacks: The opening titles of the first episode don’t appear until 23 minutes in — a nod to “Raising Arizona,” which doesn’t start its credits until the beginning of Reel 2. The cattle gun that Anton Chigurh (Javier Bardem) fatally applied to the temples of his victims in “No Country for Old Men” is used here for its intended purpose. Nurse Mayweather’s calling out her boss at the hospital for “malfeasance” references Marge Gunderson (Frances McDormand) in the movie “Fargo,” who informs Jerry Lundegaard (William H. Macy) that’s she in town “investigating some malfeasance.”

The bank executive’s rationale for declining Loy’s offer to get in the credit card business is low-hanging comic fruit, but it’s ripe: His customers are “just not going to spend money they don’t have.” And “charging them high rates of interest and preying on them when times get tough … that’s just not what banking is all about.”

Loy’s rejection of the notion that it’s a dog-eat-dog world is revealing of his character. “That’s how dogs work,” he says. “Men are more complicated.” Force alone doesn’t seem like the only tool in his box.

Hanging dead rats in a slaughterhouse to discourage other rats from infiltrating it is as good a sign as any that the operation could benefit from wiser management.

Steven Spielberg gets a restraining order against a stalker

END_OF_DOCUMENT_TOKEN_TO_BE_REPLACED

Britney Spears cozies up to Sam Asghari for 39th birthday

https://www.instagram.com/p/CIRor89APdu/ Britney Spears is feeling the love on her 39th birthday. The pop star posted a pair of cozy snaps with boyfriend Sam Asghari on Instagram Tuesday, a day before her December 2nd birthday. “Happy b-day to me,” Spears captioned one post, adding a collection of festive emojis, including cakes, stars, and flowers. In another photo, 26-year-old Asghari is seen […]

END_OF_DOCUMENT_TOKEN_TO_BE_REPLACED

END_OF_DOCUMENT_TOKEN_TO_BE_REPLACED
We and our partners use cookies on this site to improve our service, perform analytics, personalize advertising, measure advertising performance, and remember website preferences.Ok