Finding More Than Humbug in Scrooge and Company

When I was younger, I drank in every version of “A Christmas Carol” I could find like they were tumblers of eggnog. Eventually, I became a connoisseur. (I maintain the supremacy of “The Muppet Christmas Carol” and “Scrooged,” which I am obligated to watch whenever they’re on TV.)

It isn’t the holly-jolliness that draws me in; I’ve always been intrigued by Scrooge’s scrooginess and the various interpretations of the three ghosts. But this year, as I indulged in a holiday buffet of different productions of “A Christmas Carol,” I found not just a story of redemption and the Christmas spirit but a study of what it truly means to be a decent person in a community. Dickens’s tale, like many of his others, is grounded in progressive politics, and I saw that especially now, in every version I encountered this year, as coronavirus numbers remain high. This isn’t just about Scrooge; it’s about a society that values profit over humanity, fails to hold its most privileged accountable and refuses to support its most vulnerable.

My first foray into Dickens’s text this year was a one-man version of “A Christmas Carol” with Jefferson Mays. It was brilliantly directed by Michael Arden for a performance at the Geffen Playhouse in Los Angeles, and filmed live without an audience at the United Palace Theater in Manhattan. In this iteration, Mays (with the help of some slick lighting and sound design by Ben Stanton and Joshua D. Reid) takes on over 50 roles. His Olympic-level gymnastics throughout the performance aren’t the only thing that made this production spark: The very concept of a solo performance gives the misanthropic Scrooge a new dimension. In dexterously switching from Scrooge’s jovial nephew Fred to his kindly clerk Bob Cratchit to the dastardly Scrooge himself, Mays is embodying one of the text’s central themes: a real and lasting connection to the community. 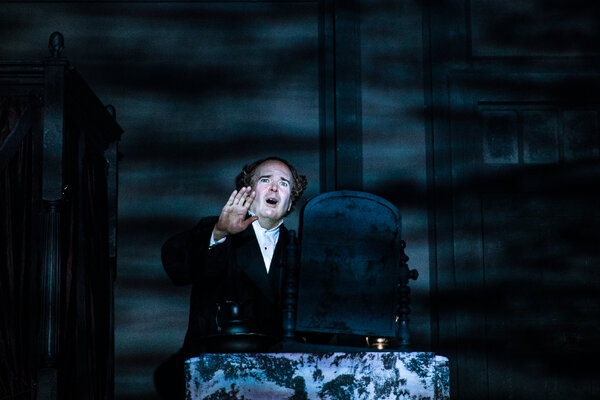 Some versions of “A Christmas Carol” fail to show much of Scrooge’s neighborhood and the people in it, in favor of a sleeker, hyperfocused story. But representing it that way would also somewhat undercut this political theme. In the Milwaukee Rep’s filmed version of the 2016 production of “A Christmas Carol,” directed by Mark Clements, the otherwise very traditional adaptation is punctuated by moments of audience participation. Jonathan Wainwright, as Scrooge, asks the crowd whether he is imagining his ghosts, requests that onlookers point him in the direction of the next spirit and questions them about how he should proceed. As audience members respond with noises of judgment to his hearty pre-haunting meal of gruel, they take on some responsibility for this man and his redemption. After all, what else is an audience but a community?

I thought of community, too, as I listened to the Goodman Theater’s audio adaptation of Dickens’s story during a walk through Prospect Park. With the Ghost of Christmas Present, Scrooge goes on a tour — unique to this version — of locations around town where working-class folk are keeping merry while laboring along: Miners join in a chorus of “Silent Night”; two women wish each other “Merry Christmas” within a lighthouse; and crew members on a ship hum carols.

In the park, I swerved on my path as the miners sang, trying to maintain social distance, hopping to the side as a stroller unexpectedly changed direction on the narrow walkway, reminding me with a jolt of my place in the world, as someone accountable for my neighbors.

“Will you decide who shall live and who shall die?” this Ghost of Christmas Present asked Scrooge, a question asked many times this year: Is it those in government who played down the disease, those in law enforcement who disregarded Black lives or those who have put others at risk during the pandemic?

Two other “Christmas Carol” adaptations I watched explicitly took on our current issues, in different ways. Manual Cinema’s “Christmas Carol,” a gorgeous mixed-media adaptation featuring live performance, stunning puppetry and animation, and live music, inlays Dickens’s tale within a story about a woman named Trudy (N. LaQuis Harkins) who grudgingly keeps up the holiday tradition of presenting a “Christmas Carol” puppet show, this time via her computer screen; it was something her cheery, Christmas-loving husband, who died from Covid-19, loved to do. Trudy, however, is too busy to worry about festive puppets and ugly sweaters. She mentions all the disasters of the year, her jingle-jangle attitude officially gone — and, really, who can blame her?

Estella (Betsy Wolfe) is the head of Bleak House, a big bad corporation that pinches pennies everywhere it can. Her company won’t even provide proper health insurance to her assistant’s sick child, Tiny Tammy, with its “Silver Dollar Plan.”

When Estella returns to her hometown to put up a strip mall, which requires tearing down a hotel that’s a refuge for the troubled, poor and lost. She says she’s helping the needy help themselves, with new jobs (“food service!” “maintenance!”). It’s a wonder Ayn Rand doesn’t show up. “She’s the oligarchy!” declares a hotel resident who calls Estella a “pickpocket in a pantsuit” … a.k.a., a capitalist.

After all, Estella represents the worst of the United States, where big business takes priority over human life. (When Scrooge tells the tortured ghost of his old partner Jacob Marley that he was a good businessman, the ghost declares, “Business! Mankind is my business!”) In Scrooge I see a whole nation that fails to protect and honor those who live under the thumb of the rich old Ebenezers.

Remember what the Ghost of Christmas Present hid under his luxurious robe? It’s not included in some versions, though it made the cut in most of these. Scrooge spies a gaunt hand that belongs to a child, one of two under the robe, whom the ghost says belong to Scrooge and all of mankind: One is Ignorance. The other is Want. They are our progeny, our plague, and Scrooge shrinks away from them in horror.

This year we have faced our ghosts and reckoned with our responsibility for the people around us. That story is beyond Dickens and Scrooge and beyond the Christmas season — it is now and forever, each of us for the other, if we can hope to someday be merry together.