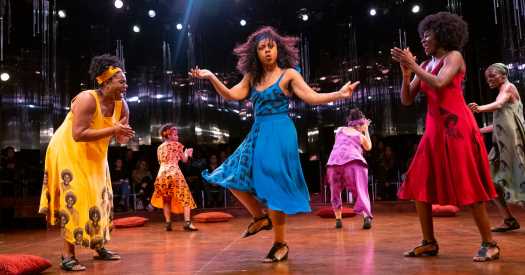 “For Colored Girls Who Have Considered Suicide/When the Rainbow Is Enuf” is not a play. Or that’s not what the breakthrough work was called by its author, Ntozake Shange. Her word was “choreopoem,” and any production of “For Colored Girls,” like the major revival now in previews at the Public Theater, has to figure out what the term means.

To the revival’s director, Leah C. Gardiner, the definition is not that complicated. “A choreopoem,” she said, “is a combination of all forms of theater storytelling.” Which isn’t to say that it’s simple to realize. In the carefully chosen words of the revival’s in-demand choreographer, Camille A. Brown, “combining text with movement is very complex.”

For Paula Moss, the choreographer of the original 1976 production at the Public, “choreopoem” summons a memory of San Francisco in 1973. Shange, who died last year, had just met Ms. Moss in a dance class and invited her to a poetry reading.

“She stood up and started to read a few of her poems,” Ms. Moss recalled in a telephone interview from her home in Rome. “Normally, poets stand there very stiff, but as she read, she starting dancing. Everyone was shocked.”

From then on, whenever Shange recited her poetry, she moved. Often, Ms. Moss would be beside her, improvising in dance. “She told me to listen to her words and the sound of her voice and interpret them,” Ms. Moss recalled. “She had the flow of a musician, and she could communicate the most intimate and secret feelings that women were going through. And movement and words came from the same breath. There could be no separation.”

Both in their 20s, they were quickly joined by other young women, and sometimes by musicians, as they performed the choreopoetry that would become “For Colored Girls” in women’s bars, cafes and Fillmore District clubs. After Shange and Ms. Moss drove to New York City, the work acquired a director and a more fixed shape. Eventually, at the Public Theater and then on Broadway, it became a landmark production of American theater, its script a classic of African-American literature. But it is not always remembered that it all started with a poet dancing.

Shange, for her part, persistently emphasized the importance of dance in her life and work, the way it connected her to her body and her African-American heritage. “It’s how we remember what cannot be said,” she once wrote.

In her essay-poem “Why I Had to Dance,” she recalled how, in the years she was developing “For Colored Girls,” dance became as important to her as writing. She acquired the habit of going directly from dance class to a coffee shop with her journal, as “the endorphin high” helped her “get to the truth.” More broadly, “movements propelled the language and/or the language propelled the dance.”

After Shange relocated to New York, her favorite dance classes were those she took as a scholarship student at Sounds in Motion, the Harlem studio of the choreographer Dianne McInytre. Over the phone from Cleveland, Ms. McIntyre recalled “the beautiful flow” and flexibility of Shange in class: “She cut through space like a gazelle.”

For the rest of Shange’s life, Ms. McIntyre often worked with her as a choreographer and a dancer. What Shange wanted from her, she said, was not literal translation: “You respond to the energy of her words, the meaning. You’re going deep to the place where she’s coming from.” There was “total collaboration,” she said, among Shange, a choreographer and a director. Similarly, it was “sometimes not easy to tell the difference between dancer, actor, singer. Everybody does everything. Everybody is thinking motion.”

Aku Kadogo, another McIntyre student, joined Shange’s crew, improvising in bars then becoming an original cast member of “For Colored Girls.” Now the chair of theater and performance at Spelman College, she remembers how dance was “more public” back then: “Dance was around us, integral to our culture, and Ntozake captured that. She caught it with language.”

References to dance abound in the text of “For Colored Girls,” in both the poetry (“we gotta dance to keep from cryin/we gotta dance to keep from dyin”) and the stage directions. Yet some audience members, Ms. Moss recalled, wondered where the choreography was. “That wasn’t the point,” she said. “This was a whole new form of theater. The choreography was within the poem and the performer. We worked hard to be free in our bodies as we recited the words.”

It was a form of theater that Shange often had to defend. Calling herself a poet rather than a playwright, she railed against theater conventions, arguing that for black artists, plays without dancers and musicians were a waste of an “interdisciplinary culture.” Explaining her collaborations with choreographers and musicians, she wrote how in her work, as in traditional theater, “everyone’s efforts are directed toward the exploration and integrity of the text.” The difference in her collaborations: “The text grows.”

Therein lies the promise and some of the perils facing the “For Colored Girls” revival. Ms. Brown knows something about the borderline between theater and dance. She is one of very few choreographers to maintain a successful contemporary dance troupe (hers performs at the Joyce Theater Nov. 9-10) and a thriving career in theater. (She choreographed the current Metropolitan Opera production of “Porgy and Bess” and her work on “Choir Boy” was nominated for a Tony Award earlier this year.)

Interviewed before a recent rehearsal, Ms. Brown said that choreographing a choreopoem wasn’t so different from her usual practice. Much of her work is rooted in social dance and gesture. The children’s games — hand clapping, double Dutch — important to both the original production and to Ms. Gardiner’s vision, are a facet of African-American culture that Ms. Brown has already explored in her own “Black Girl: Linguistic Play.”

It’s a connection that Shange recognized. Before her death, Shange interviewed Ms. Brown for a book she was writing about dance. (“I should be interviewing you,” Ms. Brown recalls thinking.) Planning the “For Colored Girls” revival, she told Ms. Gardiner that Ms. Brown was her choice for choreographer.

Ms. Brown admits some difficulties, like the danger of falling into clichés of spoken-word performance. “How can we honor that tradition but still challenge people to think differently?” she asked. “How far can we stretch the abstraction and leave things a little more ambiguous?”

But, especially as a choreographer working in theater, Ms. Brown said that she is grateful for the precedent set by Shange: “What’s beautiful about Ntozake’s work is that movement is not seen as a distraction. It’s part of the story. When I’m given the space to serve the story through movement, that feels good.”

From her director’s perspective, Ms. Gardiner described the making of this choreopoem as a process of unusually pervasive collaboration. “You need everybody in the room at all times,” she said. “Even when I’ve directed musicals, everyone had a set role,” she added, whereas in “For Colored Girls” rehearsals, the team of black women — she and Ms. Brown and the composer, Martha Redbone — were “all in the pot, cooking it up together.”

Working that way is costly, Ms. Gardiner noted. But it was Shange’s way, and Ms. Gardiner sees a connection between Shange’s example, a current upswing in dance and music in plays and a surge in black playwrights “working and writing out of our tradition.” It is, she said, “an exciting time in American theater.”

A time that recalls an earlier time. Ms. Moss, thinking of the beginning in San Francisco, remembered a painful feeling, as she danced to Shange’s poems, of something holding her back, like being at the edge of a cliff unable to jump. “Until one day, I jumped,” she said, “and I felt this rush of freedom, and we drove that car across the country, saying to ourselves, “We have something.’”

END_OF_DOCUMENT_TOKEN_TO_BE_REPLACED

END_OF_DOCUMENT_TOKEN_TO_BE_REPLACED
We and our partners use cookies on this site to improve our service, perform analytics, personalize advertising, measure advertising performance, and remember website preferences.Ok