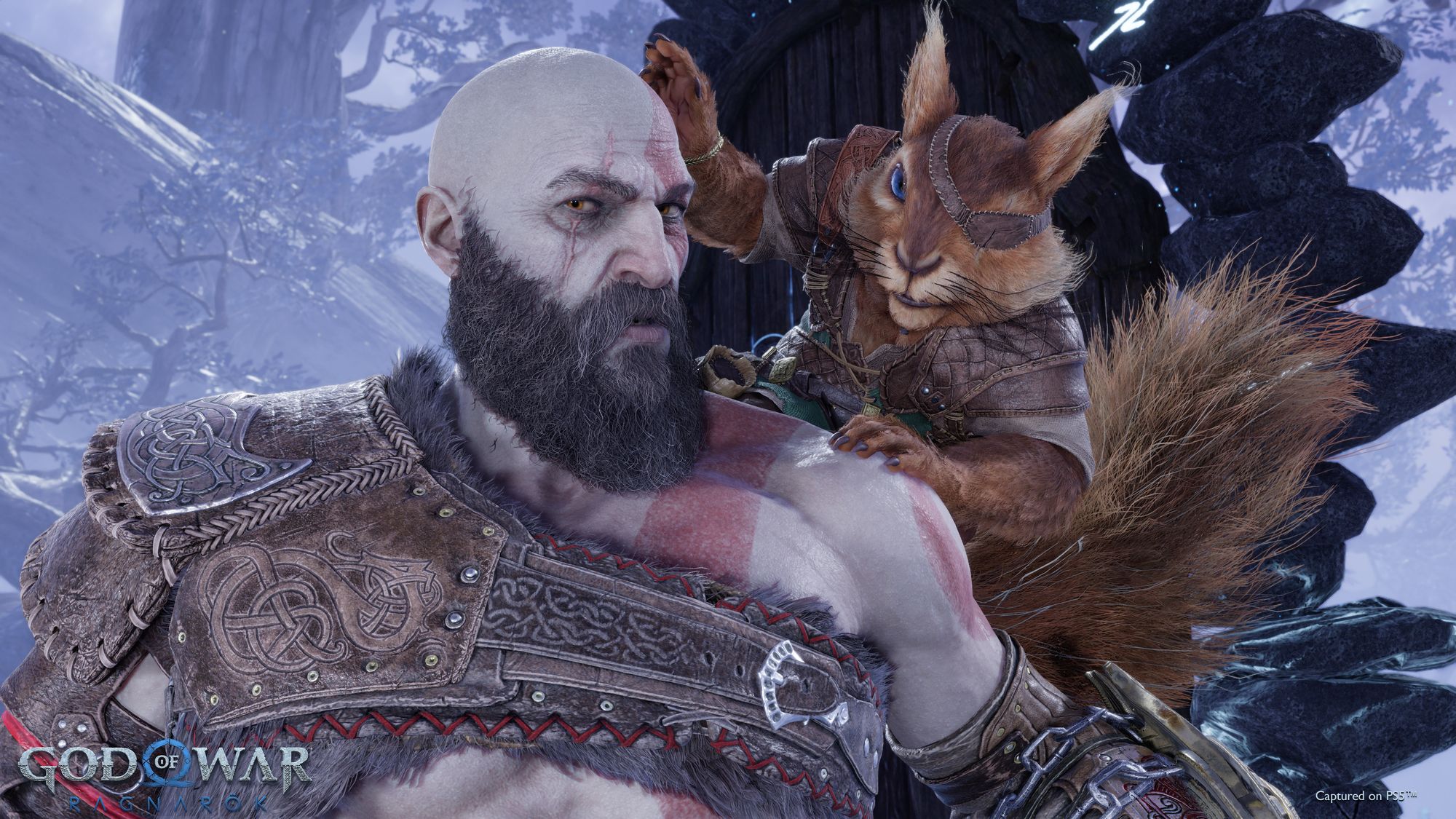 The Friday letters page thinks A Plague Tale is turning into a medieval Tomb Raider, as more readers comment on the price of the PSVR2.

The contenders
Very good review of God Of War Ragnarök, GC. Very in-depth. I suspected it might be an 8/10 based on your preview, which made it clear this was just going to be more of the same and not necessarily even as good. I’ve had it pre-ordered for months though, so I’m definitely getting it, and the only part of your review that worries me is that the ending might not be that great, but I guess I’ll see.

It’s obviously not going to be GC’s game of the year but on Metacritic it’s second only to Elden Ring so… does that mean From have got it sewn up in terms of The Game Awards and the other big award shows? I’m not so sure. Recency bias is always very important for these sort of things and I can imagine God Of War being bigger for longer than Elden Ring.

I imagine GC’s big rival for the top spot is Bayonetta 3 but I certainly can’t see that winning with anyone else. With a lot of these other award events, I think a lot of the decisions are based on what they hope will please readers/watchers, instead of what they genuinely think deserves to win.
Mr Crow

IndieBox
I’ve been thinking a lot recently about the (poor in my view) state of gaming. It seems clear that all culture is under attack from mega corporations who possess not an ounce of artistic integrity. I’m also in the middle of studying for a business qualification and am currently learning about co-operatives and it’s got me thinking.

Do you think it would be feasible for hundreds of small talented indie game companies to team up together and build their own console? They’d all be part owners and free to make their games how they see fit and the large range of games would surely be enough to make it the console a success.

I know I’m not the only one who can’t be bothered with the triple-A blandness we get served up these days so surely theirs an audience there waiting.
Chris

GC: It’s a nice idea but hardware isn’t something that really keeps indie developers from doing what they want, especially given what an open format the PC is.

Pilleur de Tombe
Is it me, or does A Plague Tale seem to be morphing into the modern Tomb Raider style games?

I’m around two thirds through the story and (minor spoilers ahead), I’ve done a lot of the following:

What I loved about the first release was the setting and atmosphere, figuring out how to use the (usually night-time) environment and swarms of rats in the most efficient way.

It feels like I’ve spent more time in daylight than night, so hopefully the final third is more reminiscent in tone to the first game.
ttfp saylow (gamertag)
Now playing: A Plague Tale: Requiem and Psychonauts 2

It’s fine
I’m writing this as I watch the end credits roll on Gotham Knights, after completing the main story in around 31 hours (with a few side quests, etc. thrown in). I have to say that while it is both better and worse than the Batman: Arkham games, I thoroughly enjoyed it.

There were a few times when I had some frame rate slow down on the PlayStation 5, but nothing that ruined my enjoyment of the game. The role-playing elements are pretty cool, as are the suit crafting and customisation options. I think I’d maybe give it a 7 or 7.5 out of 10 personally, but I agree with all of the points and criticisms in your review for the most part.
Rickandrolla (PSN ID)

GC: Score aside, we agree with you. It’s not a great game but it’s a perfectly entertaining one and doesn’t deserve the punching bag status it’s somehow acquired.

No way back
I don’t have a definitive answer for Dreadlokk, from the Thursday inbox, about being banned from Call Of Duty.

Check Have I Been Pwned?

The 2FA thing is bothersome but worth doing for that reason.

I assume the only option for you is to create a new Activision account and add a new gamertag/ID.

Personal taste
RE: Chris. As GC said, the feature was a list of games I enjoyed more than I expected to, not necessarily my favourite 10 games on the console. Plus, it’s obviously a subjective list, as we’ll all enjoy different games to varying degrees.

Quite a few of the ones you listed wouldn’t be anywhere near my personal favourites and I actually included Red Dead Redemption 2 in an earlier feature about the PlayStation 4 games I found most disappointing.
drlowdon

Jog on
I just don’t see gamers clamouring to pay £530 for PlayStation VR2. Even after the price hike of Meta Quest 2, it’s still considerably less money (£399 for the 128GB version) and that’s for a wireless headset. If PlayStation VR 2 was wireless, the price would seem more reasonable. Given the state of the economy, weak launch line-up, and high price I think only those who pay silly money for trainers will rush out to buy it.

These type of products usually sell out at launch, and not just because of scalpers. Longer term (first year) I can see PlayStation VR 2 struggling. Hopefully that means scalpers being stuck with headsets they can’t shift!

Until the price becomes more reasonable, or at least more justifiable (better games library), I feel Sony face an uphill task. I also feel PlayStation VR 2 not being wireless is a huge mistake. VR demands total freedom of movement in my view, which is part of the reason Meta Quest is so popular, along with its price. £530 is not an impulse buy or such a low risk as £350 was for the original.

So given the choice of my next 10 or more pair of trainers being paid for, or splashing out on PlayStation VR 2, it’s safe to say my jogging days are not over!
Anon

GC: Unless you want it to be twice the price, the wireless technology necessary is not an option. The wireless adapter for the Vive headset is more expensive than the entire Meta Quest 2 headset.

Impulse purchase
I think we all knew looking at the spec that the PlayStation VR 2 was going to be expensive but £529/$549.

A PlayStation 5 and VR2 bundle for effectively £1,000… why that will just fly off the shelves! They must be sending this out to die. Will this be this generation’s Kinect 2?

I fully understand why it isn’t backwards compatible with the existing VR games, but that doesn’t make it any less of a nail in the coffin for the headset that it isn’t.

I bought my PlayStation VR for £200 with five games (good old black Friday mega pack deal) and have not once regretted my purchase. If I actually boiled down the amount of time I’ve used it I’m sure it’s fairly bad value for money, but any time I use it I find it genuinely impressive.

PlayStation VR 2 is a massive step up and I will be very envious of anyone who has one but, by golly, who in their right mind would think it’s worth the money? And where do they go to make it even halfway to mass market appeal?

I find Sony baffling with some of their decisions. How is it that no-one felt they could speak up and say they can’t push this out to market at more than $499 and even then it would struggle to gain traction. Could they not crunch the numbers and get it to $450?
irve77 (gamertag/ PSN ID)

Going rate
I don’t think anyone was expecting less than £400 for PlayStation VR 2, so although more than expected I’m not too surprised by the price. I think it’s the nature of the beast and is what good quality gaming VR costs. VR adoption has increased but I think that’s mainly on the budget, untethered end with the Quest (even that saw a £100 price increase recently, with £400 now for the cheapest model) so it’ll be interesting to see how quick Sony can shift those 2 million units they plan to build. I’m very interested in the device, but the initial small software library means I’ll wait.

I was entertained and impressed by PlayStation VR and very keen to upgrade to a much better VR experience. No one thought it looked like reality when using it due to the low resolution of the headset and having to process two images, meaning the graphics have to be downgraded from the level you see on a flat screen. But its ability to put you in the game was outstanding and my playthrough of Resident Evil 7 on PlayStation VR ranks as one of the best gaming experiences I’ve had. So when there’s a good handful of those on PlayStation VR2 I’ll pay the money being asked.

The notion that VR was the future of gaming was dispelled a long time ago and it doesn’t look like it’ll move on much with PlayStation VR2 either, with the same obstacles to mass appeal of price, being tethered, and having a relativity cumbersome headset strapped to your face just as prominent now as when PlayStation VR launched. VR converts, though, I think be very happy with the tech on offer and will not consider the price unacceptable.
Simundo

Inbox also-rans
Just a public service announcement, the Kickstarter for the Slay the Spire: The Board Game is now live. It’s already smashed the funding goal. I know there are lots of fans of this game on these pages.
eyetunes (PSN ID)

I don’t think he’s made a genuinely great game since Metal Gear Solid 3 but I’ve got to respect Hideo Kojima for not selling out. That always surprises me about people that are already established, just selling out so they can retire or early or whatever. Wouldn’t you rather make what you want with no hassle? Money, literally, can’t buy that.
Benson